Legislation introduced by Congresswoman Betty McCollum prohibits US assistance from contributing to the detention of children, home demolitions or annexation

Congresswoman Betty McCollum has renewed her efforts to prohibit US taxpayers’ dollars from being used to abuse Palestinian children. This time, her new bill would also ban US aid to Israel from funding annexation or the demolition of Palestinian homes.

Despite the broadened scope of the legislation, the bill received the support of liberal, pro-Israel Jewish groups that oppose the occupation in a sign of growing wariness on the left of Washington’s uncritical backing of Israel.

The bill, titled Defending the Human Rights of Palestinian Children and Families Living Under Israeli Military Occupation Act, was released on Wednesday.

“I strongly believe there is a growing consensus among the American people that the Palestinian people deserve justice, equality, human rights, and the right to self-determination,” McCollum said in a statement marking the introduction of the legislation.

“The unprecedented endorsement of this bill by human rights organizations as well as Christian, Jewish, and Muslim organizations is indicative of an energized movement in support of human rights for Palestinians. It is time for Americans, especially Members of Congress, to stand with Palestinians and Israelis who seek a future of peace and justice.”

The legislation itself delivers a damning description of Israeli abuses against Palestinians under the occupation, including the prosecution of minors in military courts.

“In the Israeli-occupied West Bank, there are two separate and unequal legal systems, with Israeli military law imposed on Palestinians and Israeli civilian law applied to Israeli settlers,” it says.

It also calls in broad terms for an end to the occupation and backs equality for Palestinians. The legislation would make it the official stance of Congress that “the United States rejects any undemocratic system or act of aggression in which Israel unilaterally exercises permanent rule over a Palestinian people denied self-determination and human rights”.

The proposal quotes Israeli and international human rights organisations to document the mistreatment of Palestinian children by the Israeli military.

“The Government of Israel and its military detains around 500 to 700 Palestinian children between the ages of 12 and 17 each year and prosecutes them before a military court system that lacks basic and fundamental guarantees of due process in violation of international standards,” it reads.

“It is the most accurate description of Palestinian life under occupation ever presented in a congressional bill,” Baddar told MEE.

The proposal does not call for conditioning or reducing aid to Israel. It would only direct the Israeli government not to use US assistance in certain ways.

Still, Baddar said the bill breaks the taboo in US politics of making concrete demands of Israel.

“We need to break that glass ceiling that says you can never talk about accountability for Israel. This bill says Israel can do this and cannot do that, and that’s really important,” he said.

The proposal requires the State Department to submit an annual report to Congress on whether US aid to Israel was used to fund abuses against Palestinians.

The bill is backed by 13 original co-sponsors, all from the progressive wing of the Democratic Party, including three new members who won primaries against centrist Democrats last year – Jamaal Bowman, Marie Newman and Cori Bush.

J Street and Americans for Peace Now (APN), two groups that support Israel but oppose the occupation, have joined a long list of Palestinian rights advocacy groups that are backing the bill.

“APN is supporting this bill because of the reporting requirements. That is the substantive element, the action piece,” Hadar Susskind, the group’s president, told Middle East Eye (MEE) – the independently funded digital news organisatio.

“While reporting may be considered a ‘low bar,’ we don’t have it right now. It would be meaningful to have the US government report on Israeli detention and abuse of Palestinian youths. The bill does not condition or restrict aid to Israel, but it is an important step.”

The pro-Israel lobby AIPAC was quick to denounce the bill before it was even formally introduced, calling it “anti-Israel” and citing President Joe Biden’s support for unconditional US assistance to Israel.

“Peace can only come when Israel feels secure in the context of a rock-solid US-Israel alliance,” the group said in a series of tweets. “To advance the pursuit of peace, America should bolster Israel’s security & the US-Israel partnership as hundreds of members of Congress have repeatedly done on a bipartisan basis.” 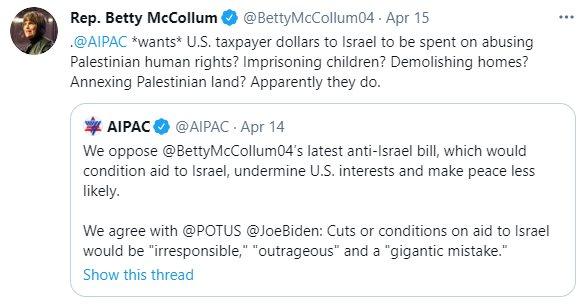 The congresswoman, a Minnesota Democrat, has been a fierce critic of the pro-Israel lobby. Last year, she called AIPAC a “hate group” after the organisation released ads likening members of Congress critical of Israel to the Islamic State (IS) group.

“I am free to criticise the actions of my government here as a member of Congress who supports the safety and security of Israel as well as the Palestinian people,” McCollum told MEE in February 2020.

“If I think that there’s a policy decision that’s detracting from the safety and security of people, I have a right to speak up and speak out about it.”

On Friday, Baddar said McCollum and others backing the bill demonstrated that backing Palestinian human rights was not necessarily a politically costly position.

“These members are proving that they can assertively oppose AIPAC and have thriving careers,” he said.

“That’s exactly what’s going to give others courage and move us in the right direction to a future congressional body that actually is able to put human rights first and carry out meaningful change in American policy.”

McCollum’s two previous bills calling for protecting Palestinian children – in 2017 and 2019 – failed to advance in Congress and did not even get a hearing in the House Foreign Affairs Committee.

This year, the bill comes before a new committee chair, Gregory Meeks, who is leading the foreign policy panel after Bowman defeated the former chairman, Eliot Engel, in last year’s election.

Baddar called for grassroots pressure to urge Democratic leaders in the House, which remains overwhelmingly pro-Israel, to consider the proposed legislation.

“If the American public actually became fully aware of how grotesque the situation that we finance is, if they understood it, I have no doubt that there would be sufficient outrage to demand a hearing and eventually a change of policy,” Baddar said.