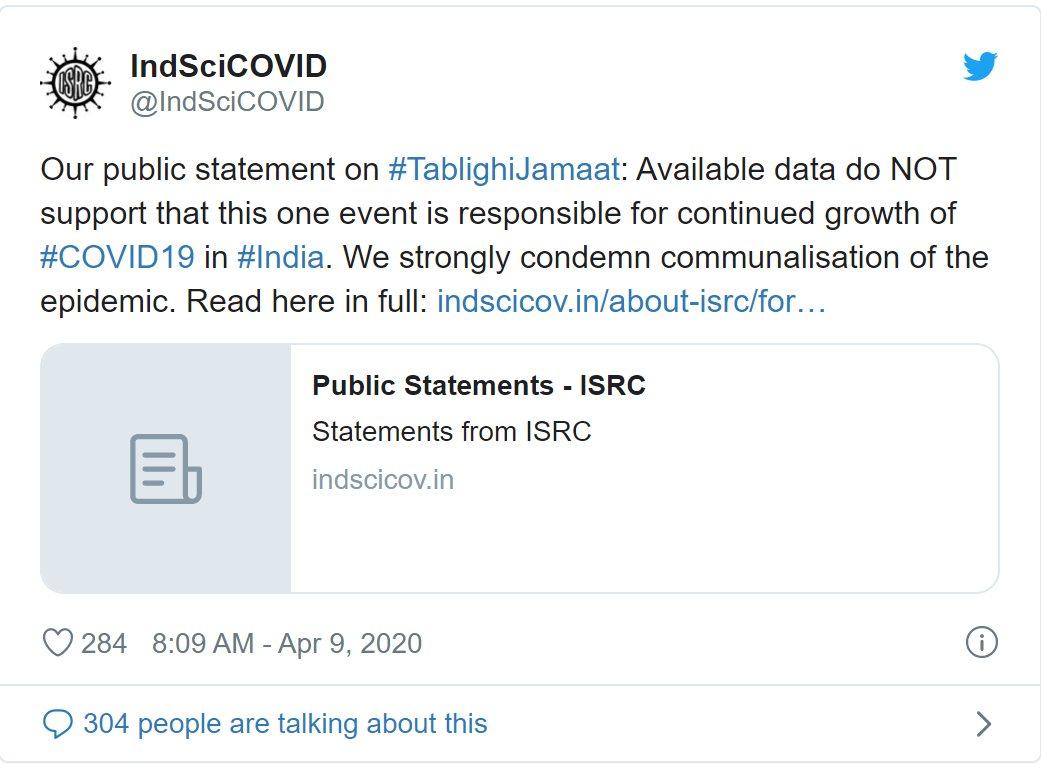 NEW DELHI – Refuting allegations against Tablighi Jamaat, an amalgam of about 400 scientists came out in defence of the Islamic group. They said there was no evidence to support the claims that a Jamaat event at Nizamuddin Markaz in Delhi was responsible for the continued rise in covid-19 cases in India.

“The available data does not support such a speculation,” a statement from the scientists said.

A campaign of calumny was launched on the mainstream as well as social media against Tablighi Jamaat in particular and Muslims in general accusing them of deliberately spreading the virus and terming it a conspiracy against the nation.

The consequences of the vilification campaign have been both real and lethal as marauding rightwing Hindu mob started hounding Muslims. Numerous incidents of mob violence against Muslims have been reported from many places in the last few days.

In the statement published on the website of India Scientists’ Response COVID-19, the group of scientists said, they “strongly condemn any attempt to communalise the pandemic. They reiterated the statement of the World Health Organization that it was “very important that we do not profile the cases on the basis of racial, religious and ethnic lines.”

“This is also reflected in the statement by the Ministry of Health which says ‘Do not label any community or area for the spread of COVID-19’.”

The statement further said, “We believe, while the Tablighi Jamaat erred by not cancelling the event, the administrative lapse of the Central and Delhi governments must be acknowledged, as this was a pre-approved event and certain arms of the government were aware that foreigners from infected countries would be participating.”

They noted that “super spreader” events have also taken place in other countries and even in India. For instance a single (now deceased) patient in Punjab led to the quarantining of 40,000 people from 20 villages in Punjab. Those who contract the virus in such an event, or spread it unintentionally, are themselves victims of the epidemic. They must not be demonised.

“The actual number of infected across the country is believed to be far larger than the number of cases that have been confirmed so far. The effects of the Delhi event on the growth rate of the all-India numbers may thus be significantly less than the numbers put out by MoHFW,” the scientists assumed.

They also pointed out that the government has not released data on how many tests were conducted among the attendees of this event and their contacts. “Thus, we do not know how the fraction of tests that were found to be positive in this case compares to testing on the general population.” They called on the government to release this data.

“We reiterate our call for the government to collect more data — by testing more — and to transparently share this data with the public,” the statement urged.