High above Nazareth, an Israeli mayor wants to keep his city Jewish ‘now and forever’ 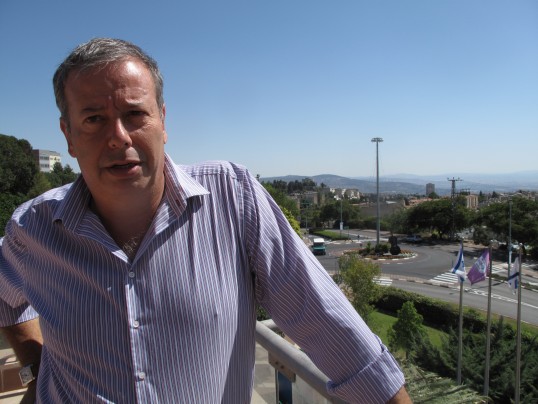 “Upper Nazareth” Mayor Shimon Gapso stands on the terrace at city hall, looking out over his city and beyond in Nazareth, Israel on September 17, 2013.

But not these days.

Over the past few years, well-to-do Arab Israelis, both Muslim and Christian, drove their minivans 10 minutes up the hill from the ancient, overcrowded nearly all-Arab city of Nazareth and snapped up some sweet but pricey five-bedroom, four-bath houses.

Many of the homes are worth a half-million dollars or more, and Arab citizens of Israel now count for 18 percent of the 50,000 residents in “Upper Nazareth,” as it is translated in English.

They are welcome here, says the mayor, as long as they remember one very important rule.

“This is a Jewish city,” said Shimon Gafsou of his adopted home town, “now and forever.”

To be more specific: “I would rather cut off my right arm than build an Arab school,” the mayor said in an interview on his terrace at city hall.

Ditto mosques. “No, no, no. No mosques, ever,” said Gafsou. Nor churches. Or Ramadan lanterns or manger scenes. “And no Christmas trees,” said the mayor of a town that abuts the largest Arab city in Israel, celebrated as the childhood home of Jesus.

“Everyone can live here, that is the law, as long as they understand this is a Jewish city,” Gafsou said. “And in that way we are a microcosm of the state of Israel.”

He said that “95 percent of Jewish mayors think the same thing. They’re just afraid to say so out loud.”

The situation here in Nazareth Illit may be a bit stark, even a little cartoonish, according to some critics of the colorful mayor, who is up for reelection next month. He has been temporarily sidelined from office after he was indicted Tuesday by the Israeli courts for allegedly accepting bribes, a charge he denies and says is politically motivated.

No matter, because he still appears to be the front-runner. And his town does reflect a central tension in Israeli society. In the current round of peace talks brokered by U.S. Secretary of State John F. Kerry, one of Prime Minister Benjamin Netanyahu’s demands is that Palestinians not only accept Israel’s right to exist, but also recognize Israel as a Jewish state.

The parallel challenge is determining what Israel should do for the 21 percent of its citizens who are Arab, and what the Arab Israelis should do for Israel.

Arabs comprise large minorities in Jerusalem and in the southern Negev desert. Here in the northern district, not including the coastal metropolis of Haifa, there are more Arabs than Jews.

Israel guarantees its Arab citizens full and equal rights. But report after report documents the fact that spending for Arab citizens is lower, on average, in education, housing, business development and other areas.

Nazareth Illit is a classic Israeli “development,” or new town, built with government support starting in the 1950s as a home for Jews on expropriated lands, according to historians.

But now, as elderly Jews die and young Jews move to Tel Aviv and its environs, the annual growth of the Jewish population in northern Israel has slowed to just 3 percent, according to the government’s 2010 census reports. At the same time, the Arab Israeli population was climbing 11 percent annually in the north.

“We call a place like this an ‘invisible city,’ a kind of city within a city, here but not really seen, not recognized,” said Kamli Tayoon, a project coordinator for Shatil, a group funded by the U.S.-based New Israel Fund that promotes social justice and equality campaigns.

Tayoon said the group surveyed a sampling of the 9,000 Arab Israeli residents of Nazareth Illit and found the focus of their desire was a government-funded Arab Israeli school. There are hundreds of such schools in Israel. They teach the Israeli curriculum, including Hebrew and Israeli history, but in the students’ mother tongue of Arabic.

“There’s an elementary school down the block, a two-minute walk, and a high school, five minutes away, but they are Jewish schools,” said Sawsan Qudsi-Hamed, a teacher and mother of three, who is an Arab Israeli.

So she drives her kids to Nazareth to go to school.

There are more than a dozen schools in Nazareth Illit, but none of them are expressly for Arab Israelis — though they could enroll in the Jewish schools, as some do. The Arab kids, about 2,000 or so, generally take the bus, walk or drive with their parents down the hill to Nazareth.

Qudsi-Hamed has lived in Nazareth Illit for 20 years. She’s happy here, she says. “Maybe for Jews this neighborhood is a step down, but for Arabs, it is paradise,” she said.

Her neighbors treat her with courtesy. Life is peaceful and quiet, and property values are soaring. But there are things that bug her. The library? It has stacks of books in Hebrew, Russian and English. But not a single one, she says, in Arabic. Why not?

“I think we need to spend more time learning to get along with each other,” she said.

This is “a mixed city, meaning it is Jewish and Arab, both citizens of Israel, with all the rights. But we don’t have a school? Not one? And forget about a mosque or a church. The mayor says he will not allow it. What would you call that?” said Abd Elrazik Shtiwy, an activist and a resident here since 1954 who remembers when a Bedouin tent with camels stood across the street from where the Plaza Hotel is today.

Gafsou, the mayor, said some of his good friends are Arabs. He is a former Israeli paratrooper, his four sons are all in the military, he drives on the Sabbath, drinks a whiskey or two, and is a proud Zionist.

In the left-leaning Israeli newspaper Haaretz, Gafsou penned an opinion piece in August. “Over the past few days, many people have been calling me a racist. Sometimes they also call me a Nazi, a bully or even Hitler,” he wrote. “What’s my crime? What act of bullying did I commit? I made a clear and unequivocal statement that Upper Nazareth was a Jewish city.”

He then compared himself, not unfavorably, to Abraham, Moses, Theodor Herzl and David Ben-Gurion.

To keep his city’s population Jewish, Gafsou is working with the Israeli government to build a development of 3,000 units designed to attract ultra-Orthodox Jews from Jerusalem.

Gafsou showed off some architectural drawings of the planned addition. It will be located right below, and in front of, one of the up-and-coming Arab neighborhoods.

“It has the best views,” he said, spreading his arms and smiling broadly.

Would ‘Rather Cut Off My Right Arm’ Than Build Arab School

Upper Nazareth, a city of some 50,000 people in northern Israel, is a pretty mixed city by Israeli standards. Initially a “Jewish” city, the close proximity to the heavily overcrowded Arab city of Nazareth has some 18 percent of the city’s population ethnically Arab, either Christians or Muslims.

That’s fine, according to Mayor Shimon Gafsou, at least to a point. Gafsou insists that “everyone can live here, that is the law,” butalso rules out ever allowing the Arabs to build mosques or churches, or even have a Christmas tree.

“95 percent of Jewish mayors think the same thing. They’re just afraid to say so out loud,” Gafsou claims, and he went on to punctuate his position by declaring “I would rather cut off my right arm than build an Arab school.”

Still and all, that’s 18 percent of the population, and a population that at least nominally has equal rights inside Israel. That’s going to make it tough for Gafsou to keep his segregationist philosophy in place, especially with that percentage growing all the time. The minorities have to be content sending their children to the next city over to attend school, for now.

Gafsou’s position is politically tenable for now, and a lot of Israeli politicians run on a policy of overt discrimination against Arabs, but in a city where Jews and Arabs live side by side contentedly, the policy must seem ridiculously old-fashioned to the younger residents, and seems doomed in the long run.