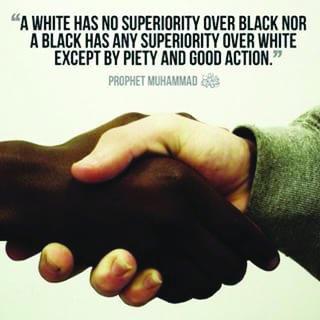 Islam with its universal concept of brotherhood rejects all artificial and man-made marks of distinction.

When listening to the radio, reading newspapers, surfing the Net or watching television, we are confronted daily with the same sad news: Violence, crime, wars and disasters.

This constant awareness of fear and tension should make us think what has triggered such violence and what can be done to end it. Any sensitive and compassionate person might question seriously the progress of our modern world.
One of the main factors producing the differences between cultures and cultural attainment in the world is history rather than race.

If racial superiority is only a myth why then has race in the past played and continued to play a large part in world conflict today? Why in some areas do people argue that others are biologically inferior to them?

Racism is the belief that a particular race is superior or inferior to another; that a person’s social and moral traits are predetermined by his or her inborn biological characteristics. It is the belief that different races should remain segregated and apart from one another. Such racist attitudes are abhorred and condemned in Islam.
Allah says:

“…We created you from a single (pair) of a male and a female and made you into nations and tribes, that you may know each other. Verily the most honored of you in the sight of God is he who is the most righteous of you.” (Qur’an, 49:13)

In reading this verse we understand that this message is not just for Muslims only because God is addressing all of humanity. As Muslims we are taught that we are one brotherhood, which is part of a larger brotherhood of humanity.

Islam with its universal concept of this brotherhood rejects all artificial and man-made marks of distinction.
No one can claim any superiority over the other based on race, color, language or wealth and this is emphasized in the last sermon of Prophet Muhammad (peace be upon him) showing high regard of humanity irrespective of color or race:

A man once visited the Prophet’s mosque and saw a group of people including Salman (from Persia), Suhaib, a Greek, and Bilal, an African. The man said:

“If the (Madinan) tribes of Aws and Khazraj support Muhammad, they are his people. But what are these people doing here?”

The Prophet (peace be upon him) became angry when this was reported to him. He went to the mosque and summoned people to prayer where he addressed them saying:

“O people know that the Lord and Sustainer is One. Your ancestor is one, your faith is one. The Arabism of anyone of you is not from your mother or father. It is no more than a tongue (language). Whoever speaks Arabic is an Arab.”

As Muslims, it is fundamental we believe that discriminatory exclusion based on race is alien to the spirit of our faith and in turn we should raise our children with this belief. We should instill in them that there are no excuses or reasons for racism. It’s just wrong.

Racism divides people into ‘us’ and ‘them,’ based one’s color and caste. And it happens when people feel that it’s acceptable to treat others badly as they go about their daily lives.

God created us from a man and a woman meaning then that we are all the same. Moreover we are created through the same process, not in a manner in which some are created with a better mechanism than others.

We must understand that God made human beings into different groups and people. These differences are not wrong, but rather a sign from God. God says in the Qur’an:

“And among His Signs is the creation of the heavens and the earth, and the difference of your languages and colors. Verily, in that are indeed signs for those who know.” (Qur’an, 30:22)

We notice that not one word equivalent to race is used in this or any other verse of the Qur’an. Islam, however, limits the purpose of these distinctions to differentiation and knowing each other. This is not meant to be a source of beating each other down with an attitude of my group is better than your group or false pride as is the case with tribalism, nationalism, colonialism, and racism.

Of the many problems we face today, some are natural disasters, while others unfortunately are of our own making, created by misunderstanding, arising from the conflict of ideologies, where people fight each other for petty ends, losing sight of the basic humanity that binds us all together as a single human family. These however can be corrected.

We must remember these differences are meant for human beings to achieve progress attaining happiness through the process. We must not lose sight of this fundamental goal and at no time should we place means above ends; the supremacy of humanity over matter and ideology must always be maintained.

There are two things important to keep in mind: Self-examination and self-correction. We should constantly check our attitude toward others, examining ourselves carefully, and we should correct ourselves immediately when we find we are in the wrong.

One individual who is higher in piousness, more conscious of his Creator and is staying away from the bad and doing the good is better, no matter what nation, country or caste he is part of. Individual piety is the only thing that makes a person better and greater than the other one.

It is fortunate that the only criterion of preference mentioned is not measurable by human beings. We should leave even this criterion to God to decide instead of human beings judging each other.

Racism in the West

Racism still there. Even today, as I write this article, violence because of race is taking place. Take for instance the riots in the US after the police there killed a black young man, or the latest advertisement where the so called Israeli state will racially segregate kindergartens. How these actions by supposedly democratic countries promote progress I have no idea. This stands against all that I had been raised on, against any of Islam’s beliefs and against anything I teach my children.

I’ve learned that if something is to be funny all present should laugh at it. It’s not funny if we hurt somebody’s feelings.

To achieve such goals I learned it is necessary to develop a sense of universal responsibility, a deep concern for all irrespective of creed, color, sex, or nationality.

“Whoever has arrogance in his heart equal to an atom’s weight shall not enter Paradise. A man inquired about a person who likes to wear beautiful clothes and fine shoes, he answered: ‘God is beautiful and likes beauty’ and explained pride as rejecting truth because of self-esteem and looking down on other people.” (Muslim, 65)

We learn that the idea of universal responsibility is the simple fact that, in general terms, all others’ desires are the same as mine. Every being wants happiness and does not want suffering.

If we, as intelligent human beings, do not accept this fact, there will be more and more suffering on this planet. If we adopt the racists’ self-centered approach to life and constantly try to abuse others for our own self-interest, we may gain temporary benefits, but in the long run we will not succeed in achieving even personal happiness, and world peace will be completely out of the question.