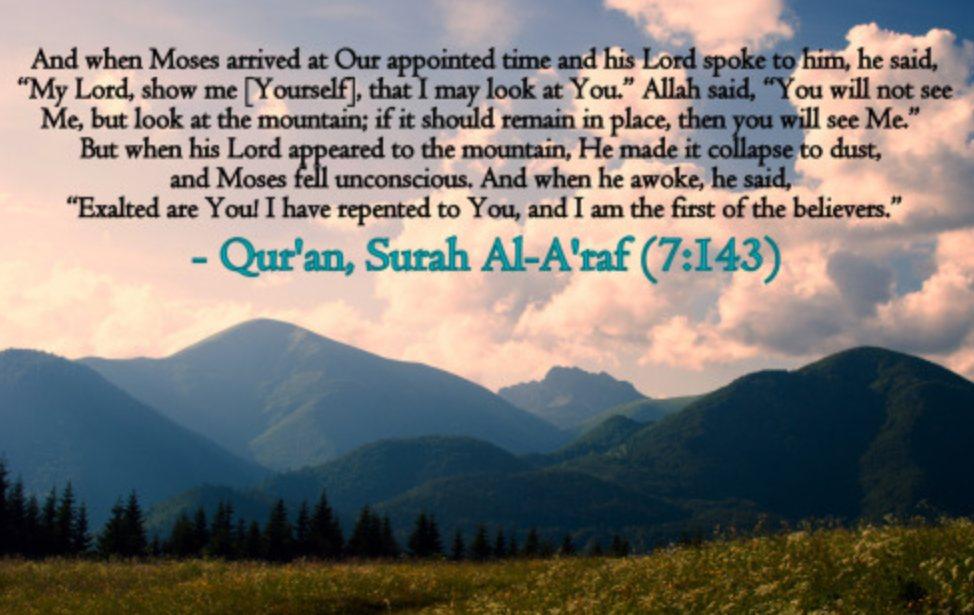 ❝al-Ashʿarī took as his authority for the possibility of the vision of God Moses’ request: ‘O my Lord show me! Let me look at Thee’ (7:143) and the Lord’s answer ‘Thou shalt not see me’….

Now did Moses know that God could be seen, or was he ignorant on the subject?

If he was ignorant his knowledge of God ill befitted the dignity of a prophet; if he did know that it was a possibility then his knowledge agreed with the fact and his request was for the possible not for the impossible.

The reply, ‘Thou shalt not see me‘, equally points to the possibility, for God does not say ‘I am not visible’ but He asserts impotence or lack of vision on the part of the seer, saying ‘But look at the mountain, for if it stays in its place thou shalt see me’. If the mountain in its massive strength could not support the revelation of God how could mortal vision? Thus the impediment is linked to a possibility and the impediment is referred to the weakness of the instrument not to impossibility itself…. Thus the vision is established as possible.

If it is objected that lan is to make the negative perpetual that is absurd, first because lan is corroborative, not perpetual, for does He not say in 18:66 ‘thou wilt not (lan) have patience with me‘ a possibility; and secondly because if it marked perpetuity it would not indicate the impediment to the possibility, but the impediment to the occurrence of the possible….

Another text on which al-Ashʿarī seized was (75:22), ‘Faces on that day shall be beautiful, looking at their Lord.’