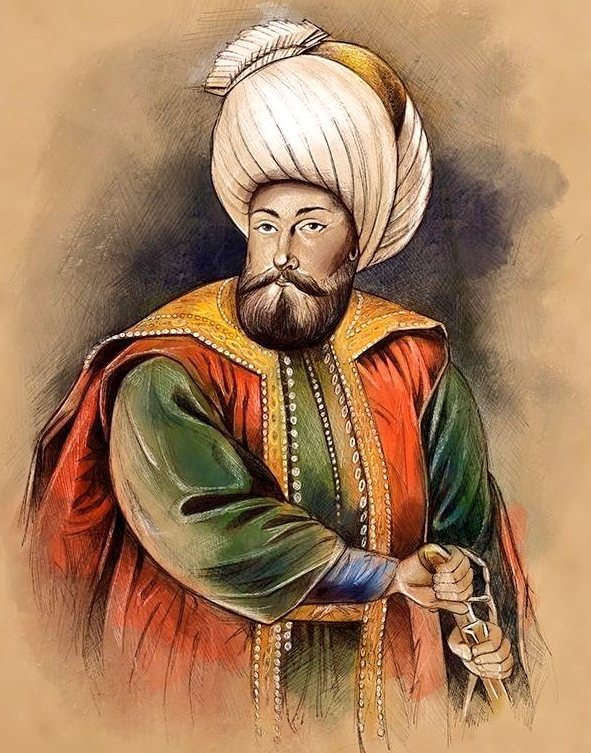 The Life and Achievements of great Osman Ghazi who was son of the famous Ertuğrul Ghazi  رَحِمَهُ ٱللَّٰهُ‎,. Sultan Osman I founded the Ottoman state in 1299 and left his mark on the world history forever.

Osman was leader of Kayi tribe and the founder of the Ottoman dynasty. Ottoman Sultanate became a large multi-ethnic Caliphate stretching over three continents in the 1500s and lasted for 624 years upto 1924.

Sultan Osman I ruled Ottoman Beylik or as Bey from 1299 to 1326 when he passed away. Famous traveler Ibn e Battuta  رَحِمَهُ ٱللَّٰهُ‎, referred to Osman I as Osmancik which means Osman the little in order to differentiate between him and 3rd Rightly Guided Caliph of Islam Osman bin Affan the Great.

Sultan Osman was the son of Ertuğrul Ghazi  رَحِمَهُ ٱللَّٰهُ‎, who was a great Mujahid and Chieftain and served the Seljuk Sultanate by successfully raiding many of the Byzantine Castles. Osman was born on 13 February 1258 same day the Mongol hordes invaded Baghdad, killing its inhabitants.

As per most accounts, Ottomans or Hanedan e Aal e Osman descended from the Oghuz Turks and belonged to the Kayi tribe in particular. And a few historians state that they were originally Arabs or at least of a mixed Arab-Turkish breed. Although this latter view is heavily challenged.

F. Uspensky notes Osman relied not only on force but also cunningness. Kinross writes Osman was a wise, patient ruler, whom people sincerely respected and served him faithfully. Osman did not arouse feelings of rivalry but only loyalty.

Osman was taught principles of Sunni Islam, and was influenced by Sufi Sheikhs, mostly his Arabic mentor and father-in-law Sheikh Edebali  رَحِمَهُ ٱللَّٰهُ‎, of the Banu Tamim tribe, and this was reflected in his personality. Edebali was the first Ottoman Qadi and shaped the policies of the Ottoman state.

The political landscape in Anatolia during rise of the Ottoman state was competitive as many neighbouring Turkoman Beyliks were present and to the West it was Byzantine state. So there were many challenges but Osman Ghazi still came out on top.

Osman Ghazi styled himself as a Ghazi (warrior of the Faith) and carried out many raids into the Byzantine lands thus earning him the reputation of a Ghazi (victor Islamic warrior) and enabled him to gain support and finances via booty. He was also eager to expand Dar al Islam.

Osman’s greatest achievement was the victory in the Battle of Bapheus that occurred on 27 July 1302, between the Ottomans and a Byzantine force. The battle ended in a crucial Ottoman victory, thereby cementing the Ottoman state and encouraging the Ottomans to expand their state further West.

As the picture shows, Osman’s efforts proved to be very successful as they helped to expand the nascent Ottoman state considerably. After these conquests, Sultan Osman brought in many Sufis and Scholars from Persian lands to serve as the great teachers in Madrassas to educate people.

The Sword of Osman (Turkish: Taklid-i Seyf) was an important sword of state used during the coronation ceremony of the Ottoman Sultans. This practice started when Osman was girt (fastened) with the sword of Islam by his father-in-law Sheik Edebali.

Sword Girding ceremony was held in Istanbul at the tomb of Sayyidna Ayub Al Ansari رضي الله عنه who was a Companion of Prophet Muhammad ﷺ. Sayyidna  Ayub رضي الله عنه had died taking part in the siege of Istanbul in 600s. Ottomans venerated his Tomb since 1453 when it was found and Sultans visited it before going for war

The fact that the emblem by which a sultan was enthroned consisted of a sword was highly symbolic: it showed that the office with which he was invested was foremost that of a warrior. Sword was girded on to the new sultan by Custodian of Rumi’s tomb who was specifically called.

It was an Ottoman way of paying tribute to the great Maulana Rumi who helped Seljuk Sultans in the Islamization of Anatolia and attracted the Christian masses towards Islam using Sufistic culture. So Ottomans always honored Mevlana Rumi and were aware of the debt they owed to him

Ottomans from the get-go made a genuine effort to rule by the Sharia as Osman I was a very Pious Sunni Muslim. He followed the policies of Islamic Scholars and ruled with the spirit of Justice and Tolerance.

Orthodox Christians in Ottoman lands were grouped into an entire nation with its religious leaders representing them to Ottoman Sultan. Christians were safeguarded as Ottomans made a real effort to rule by the Sharia and the Christian institutions were tolerated as well.

Orthodox Christians figured out that they were much better under the Tolerant Ottoman rule than the chaotic rule of Byzantine rulers or even worse if they fell under the direct rule of Rome as they would have to accept Catholicism forcibly.

According to some sources, Osman left a written will to his son Orhan instructing him to move on with conquests and Jihad against  Byzantines, that he abides by the teachings of Islam, accompany the ʿUlamāʾ, amend his parish, and dedicates himself to spread the word of Islam.

Shaykh Edebali’s wisdom filled advise  to his son in law. It shaped the essence of the Ottoman administration.
From the unique advice of Sheikh Edebali to Othman Ghazi :

“O Son!
Your weight is heavy, your job is hard and your power is holding to a hair. May Allah the Almighty assist you and bless your emirate. May He make it good for the path of the Truth and brighten its light and make it to be seen from far away. May He give you the strength to carry your weight and the wisdom and heart to clear your path.”
“O Son!
You are strong, wise and fine speaker; but if you do now how and where to use them, you would be thrown away with the first wind of the morning. Your anger and your self get together and defeat your wisdom. That is why you should always be patient, determined and resolute.”
“Patience is very important. An Emir should know to be patient. A flower does not bloom before its time. A raw pear cannot be eaten, even if it is eaten, it would stuck in your throat. A sword without knowledge is like a raw pear…”
“Let the nation’s knowledge live in them. Do not turn your back to it. Always hear its existence. This knowledge is the thing that administers the public and keeps it alive…”
“O Son!
“There are people who are born at dawn and die at night. “
“World is not as big as your eyes see. All unconquered secrets and unknowns will only be revealed through your grace and justice.”
“Respect your mom and dad! Know that blessings are with the elders.”
“If you lose your faith, you turn from greenery to deserts or arid lands.”
“Talk openly! Do not get easily offended! If you see something (which is better and more beneficial to be hidden), do not tell; if you hear, do not reveal! Do not go (as often as get people tired from you) to the places where you are loved; because, this would hurt their love and respect to you…”
“Feel sorry for the three persons: for a wise person who is among the ignorant, a rich person who gets poor and a respected person who loses peoples respect.”
“Don’t forget those who are at high places are not as safe as those at lower places.”
“Do not be afraid to insist on your rightful case. You should know that a good horse is called sorrel, and a good young man is called crazy (brave, fearless, and bold).”
“The greatest victory is to know your self. The real enemy is a human’s self, while a friend is the one who knows himself/herself. When a human sits down, it would be really difficult to stand him up. When a human sits very long, he starts to get numb. When he gets numb, he starts to talk. Then his talk turns into gossip. When gossip starts, he can never be recovered. Friend becomes enemy, and enemy becomes a monster…”
“One day a person’s strength gets exhausted but knowledge lives. The light of knowledge goes even through closed eyes.”
“When an animal dies, it leaves its saddle; when a human dies, he/she leaves his work. We should cry not for those who die, but for those who leave nothing behind. We should continue from the place they left. “
“We do not have right to halt; because we do not have much time…”
“Love must be the basis of our mission. Loving means quietness; you cannot reveal your love by shouting or reprimanding…”

“O Othman! Those who do not acknowledge their past cannot know their future. Know your past so well that you can walk strongly to the future. Do not forget from where you came from so you may not forget where you go. “

________________________________________
This unique advice of Sheikh Edebali to Othman Ghazi became the drifting force, which was the cause for so many material and spiritual victories, for all the members of the Ottoman society from the Sultan to the scholars, and from soldiers to dervishes. Therefore the real founders of the Ottoman State were sultans of the souls such as Edebali and those who were trained using his methods.
from the book titled Gülistan:
Sultan Osman I died in 1326. Inheritance left by Sultan Osman Ghazi was :
1 horse armor,
1 pair of double boots,
1 flag, 1 sword,
1 spear,
1 twitch,
2 horses,
3 herds of sheep,
Salt and a spoon but
the most important thing , an Islamic State.

This Islamic state created by Sultan Osman I would become one of the most powerful states ever which spanned over three continents and lasted for 624 years as a global Caliphate. European dreams of obliterating Islamdom or regaining Jerusalem were smashed by the Ottoman Caliphate

Ottoman Caliphate would establish an Islamic State based on Justice and Tolerance. This is a fact which is undeniable since proofs of it are just not simply historical but rational and let’s read about Ottoman justice and sky wide Islamic horizon. Read quotes in pictures below.

“Osman was a brilliant general. He was an expert in Turkish tactics of stealth and ambush. But he was also a great organiser and he marks the start of 10 extraordinary rulers and it’s hard to find a dynasty that has a remarkable succession of men in an unbroken record like this.”