Social media users who have reported shadow banning and AI restrictions of Palestinian content on platforms like Facebook and Instagram have found an ingenious way to elude these censorial algorithms. In recent days, an increasing number of Arabic-speaking users online have been reverting to at least a thousand-year-old version of the language, which eliminates all dots (diacritics) from the modern alphabet.

As recently revealed by BuzzFeed News, Instagram has removed posts and blocked hashtags related to Al-Aqsa Mosque in Jerusalem, one of Islam’s holiest sites, because it was deemed as a “terrorist organization” by the company’s moderation system. When trying to share footage of the Israeli raid on the mosque earlier this month, Instagram users said that their posts were restricted from view or removed entirely. Facebook, which owns Instagram, called the removals “enforcement errors” in response to complaints by dismayed employees. However, Israeli officials have announced that the country works closely with Facebook to monitor and remove “inflammatory content” (from Israel’s perspective) on the platform. 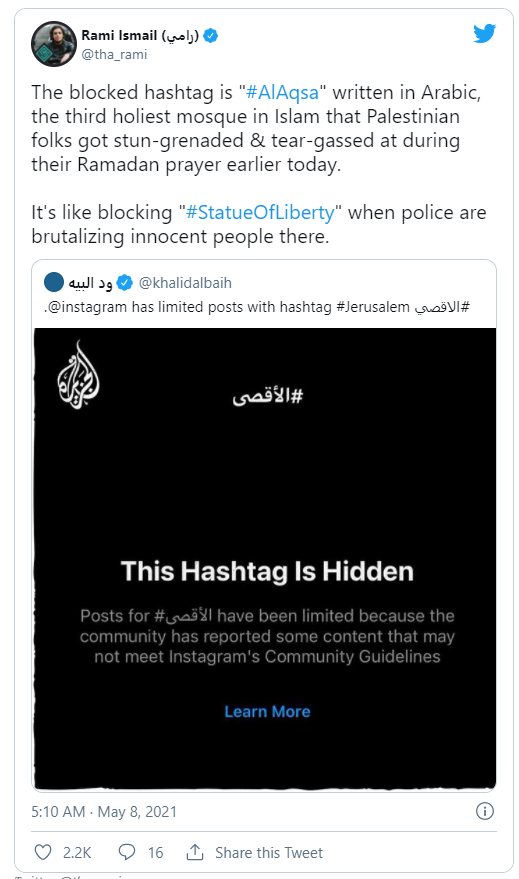 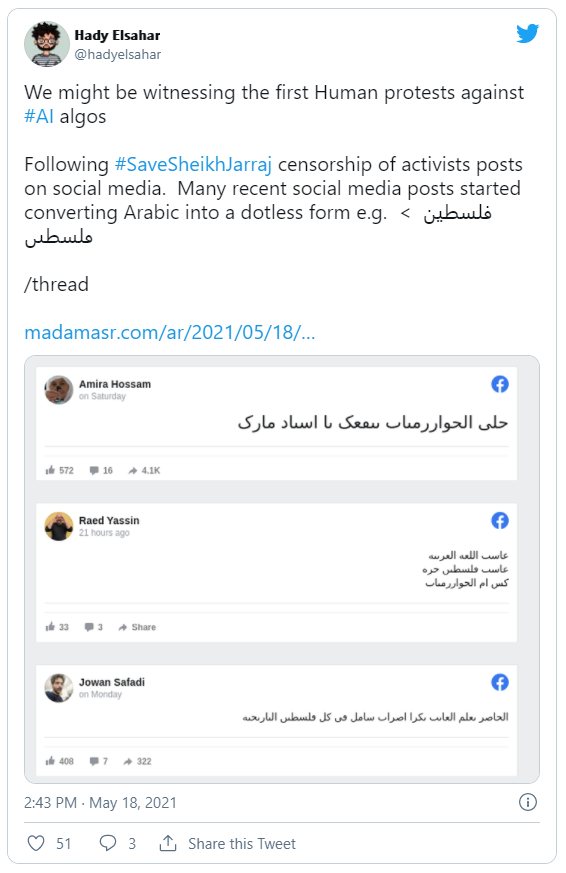 Diacritical points (dots above or below letters) were introduced to the Arabic script between the 8th-11th century, as the Islamic Empire grew in size. The practice is believed to have been borrowed from the Syriac script for clarity and more accurate pronunciation of consonants.

In an article on the independent Egyptian news website Mada Masr, written in the dotless Arabic script, activist Muhammad Hamameh describes how he came up with the idea, saying that he had previously considered using Morse code or replacing some letters with symbols.

“It’s not a new idea,” Hamameh wrote. “The original Arabic script did not know pointing and Diacritics until decades after the passing of the prophet Mohammad.”

“It’s an easy technique, even for handwriting,” Hamameh continued. “We draw our letters, so we can simply ignore adding the points. But it’s much more challenging to the AI machine, which has a [binary] code for each letter.”

Those who are interested in converting Arabic text to the dotless script can do so on the website www.dotless.app. But how long will it take before Facebook’s programmers develop an algorithm to identify the ancient script?

“Of course, it is only a matter of time before the automated systems also understand dotless Arabic script,” an article on the website Arabic for Nerds says. “But there are many other possibilities,” the article suggests. “Dialects in non-uniform transcription, for example, are still difficult for computers.”

Fun fact: the word Algorithm itself originates from Arabic, named after the 9th-century mathematician Abu Ja‘far Muhammad ibn Musa, who was more commonly known as al-Khwarizmi.