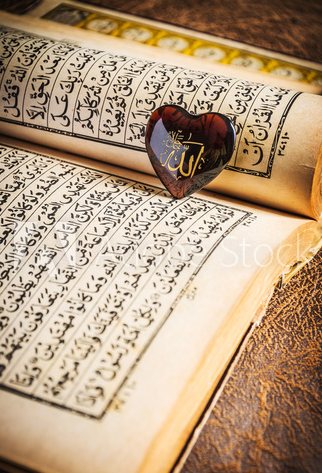 The word qalb means heart in both a physical and spiritual sense.

As we have seen in the video, qalb is the Arabic word that means “heart” in English. The literal meaning of qalb is ‘to turn’. The heart is the home for all of our emotions, rationale, and obedience or disobedience to Allah SWT. Since the heart is always turning and changing, we need to protect it and keep it safe from arrogance and spiritual diseases of the heart.

Verily Allah does not look to your faces and your wealth but He looks to your heart and to your deeds.

A Good Heart Leads to a Good Body

The heart is the controller of the entire body. If this heart is good, everything is good. But if it is not, everything will be bad; as mentioned by the Prophet ﷺ in the hadith:

The Quran Mentions 3 Types of Hearts

This is a heart that is sound and dedicated to the worship of Allaah. It is the heart that knows and believes in its Lord and prevents itself from vain desires.

The heart that is characterised as being saleem (sound) is a heart that constantly and consistently adheres to good. This is the guided heart and the one found in the believer.

And whoever believes in Allah – He will guide his heart.

After believing in Allah, this heart keeps remembering Him in an upright and good manner.

Allah compensates this heart with tranquillity:

A heart that is a qalbun saleem can save you from the hellfire.

Do not disgrace me on the day that they will be resurrected, the day when neither wealth nor children will avail, except him who comes to Allah with a sound heart.

In a hadith narrated by Anas, the Prophet ﷺ repeatedly said three times:

Whoever said, “None has the right to be worshipped but Allah and has in his heart good (faith) equal to the weight of a barley grain will be taken out of Hell.”

We should always ask Allah for this type of heart. Allah says regarding them:

[Who say], “Our Lord, let not our hearts deviate after You have guided us and grant us from Yourself mercy. Indeed, You are the Bestower.

Prophet Muhammad ﷺ and his companions would ask Allah for hearts that do not deviate. Our Messenger ﷺ would often make the dua:

O Turner of the Hearts, Keep my heart firm on Your Religion

This is the heart that is spiritually sick or diseased. It has been affected by doubts and desires, leading its owner to hesitate to worship Allah SWT.

This person loves Allah and His commands but he also loves the things of this world and its desires. He is constantly wavering between the two.

And whose hearts have doubted, and they, in their doubt, are hesitating.

Among the spiritual diseases that the qalbun saqeem is affected by are miserliness, envy, jealousy, arrogance, and others. If this heart is cleansed and returns back to Allah, it becomes saleem (sound), but if it remains upon the path in search of its desires, it becomes the heart of a hypocrite that draws further away from Allah.

In their hearts is disease, so Allah has increased their disease; and for them is a painful punishment because they [habitually] used to lie.

This heart is neither here nor there; neither saleem (sound) nor mayyit (dead). In a state of saqeem, this heart never fully conforms with the other two states.

You think they are together, but their hearts are diverse. That is because they are a people who do not reason.

It is a heart that does not have a firm stance in anything. If this heart doesn’t return back to Allah and become saleem,it is in danger of becoming stuck in uncertainty and destruction. Allah can seal this heart with its hypocrisy until the Day of Judgment. He says:

So He penalised them with hypocrisy in their hearts until the Day they will meet Him – because they failed Allah in what they promised Him and because they [habitually] used to lie.

This heart contains no life. It is caught in its base desires. It does not know its Lord, nor does it worship Him. The owner of this heart is always arrogant to the truth.

A qalbun mayyit has been covered, sealed and screened from the truth. It can’t see the truth as the truth, much less follow the truth. And it cannot see falsehood as falsehood, much less avoid it.

But those who do not believe in the Hereafter – their hearts are disapproving, and they are arrogant.

A heart in the state of mayyit still has a chance to hear the truth. But it won’t follow the truth or guidance set in front of it. Instead, the person with a heart in this state turns the truth into a mockery; a joke to laugh at or a playful matter. They fool themselves and in turn, have the influence to fool others like them. However, they can never fool Allah or the believers.

And when they returned to their people, they would return jesting.

And they say, “Our hearts are within coverings from that to which you invite us, and in our ears is deafness, and between us and you is a partition, so work; indeed, we are working.”

And We will turn away their hearts and their eyes just as they refused to believe in it the first time. And We will leave them in their transgression, wandering blindly.

May Allah protect us, guide us, and soften our hearts so that we may stand before Him with a sound heart.   آمیـــــــــــــن یارب العالمین

Conjugations of Al Qalb (القلب)
found in the Quran

مُقَلِّبَ
The one who turns

نُقَلِّبُ
We turn away
or gain