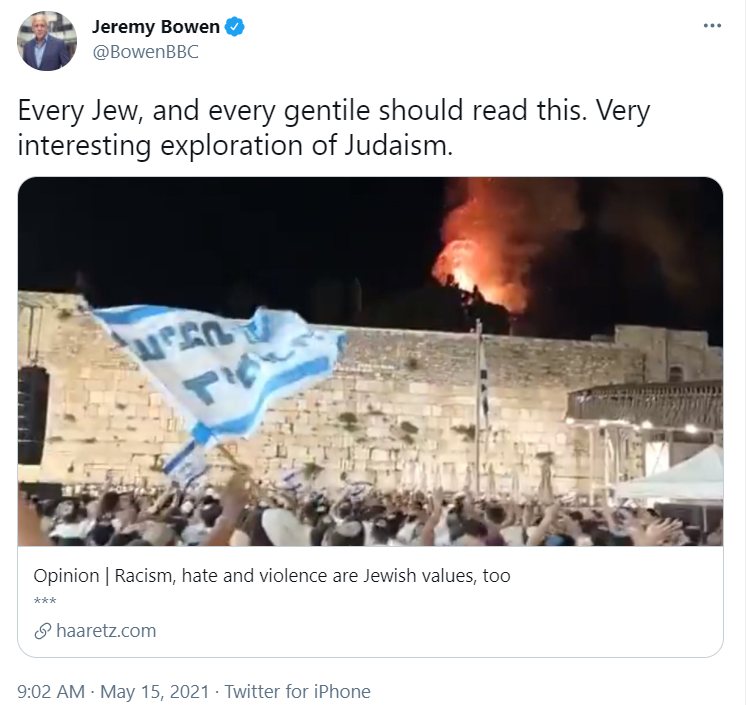 Judaism rejects the racism, hate and violence we’ve witnessed on Israel’s streets. And it also endorses them

Did you see the boys singing?

Of course you did. It was all over social media, after all. Those Israeli teenagers with their kippot and white shirts, bouncing up and down, singing a Biblical song of vengeance at the Western Wall, as a cypress tree ablaze beyond the wall made it look like the Al-Aqsa mosque was burning down.

I am sharing this, reluctantly, to point to the song they're singing. It's a Kahanist revenge song, words from the biblical story of Samson:
"O God, that I may be at once avenged of the Philistines for my two eyes"
(Yimach Shemam, may their name be effaced, the youths chant) https://t.co/OZCYNpdjUF 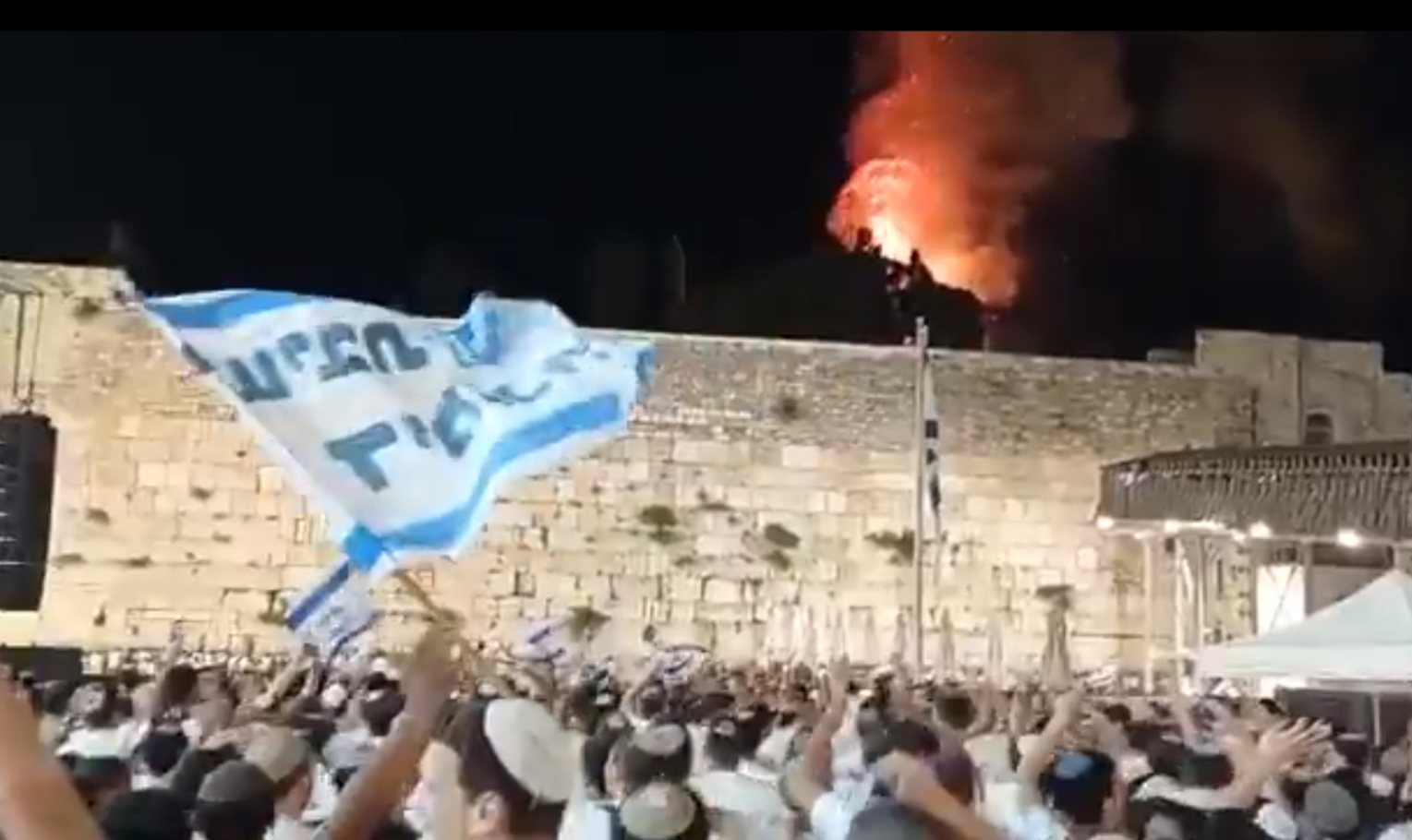 Did you shudder and think, that’s not my Judaism?

Or perhaps even tweet some words to that effect? You couldn’t be more wrong.

Looks pretty to Jewish to me. Racist and hate-filled, without a doubt. But Jewish, to the core.

Some Jews don’t want to recognize the fact that our tradition contains plenty of hate. In today’s Western culture, where identity is everything, and values are black and white, their Judaism has to be pristine.

What a pity that it can’t be. That for every exhortation to love the downtrodden and the destitute foreigner, there’s another one calling for us to be the tools of God’s wrath. That the Torah’s wonderful ecological commandment on not cutting down fruit trees is actually about how best to starve an enemy city into submission.

Oh, and that beautiful concept of Tikkun Olam that you believe means fixing the world for the benefit of all humankind? It is actually from an ancient Jewish prayer on how wonderful it is we were born Jewish and the tikkun of the olam is to be achieved by removing the idols of non-Jews from the face of the earth.

That doesn’t have to be your Judaism. Our tradition is a smorgasbord from which you can pick and choose and reinterpret at will. The rabbis have been doing that for 3000 years, and so can you.

But the problem is that if everyone can choose, and if you want to use the canonical texts of the Torah and the Talmud in your quest for social justice, and you can, you have to accept that a fellow Jew can use those same texts to justify genocide. It’s all there. And those who make the choice to be Jewish supremacists are basing it on perfectly authentic Jewish traditions.

Personally, I love every twisted infuriating bit of it. The moral ambiguities, the contrariness, the Talmudic contortions of logic, are what keeps me Jewish without believing in God. Because the canonical texts make no pretense about wanting to screw with your mind. And the only answer to the riddle is that you can’t have it all. You need to choose because Judaism is imperfect and in its entirety, amoral by design.

The fact that the Torah and the midrash didn’t try to portray the founding fathers and mothers of the Jewish nation as paragons of virtue, but was quite open about their human failings.

That King David sent a man to die in battle so he could have it on with his wife, Batsheva, King Solomon’s mother. And that David himself was the descendant of a the Moabite Ruth who frolicked in the hay with Judge Boaz, whose ancestor Peretz, was born after his mother Tamar, dressed up as a prostitute and tricked her father-in-law to having sex with her. Judah was so incensed to discover his widowed daughter-in-law was pregnant that he was about to have her burnt at the stake, until he realized he was the father.

It’s not the soap opera quality that attracts me to the Bible, but that it wants us to see our fore-parents as role-models, despite their being so lecherous and murderous. We can still take pride and learn from them.

Jews aren’t really into statuary, but if we had a Michelangelo’s David of our own, some Jews would today be calling to take down the statue of the genocidal old tyrant.

The problem with Jewish values is that there are simply too many of them, and they were purpose made to contradict each other.

If you insist that you’re progressive or a humanist, you can still have Jewish values, but you should be willing to admit that it’s your progressiveness and humanism that guide your choice of Jewish values, and not the other way around. And that the racist supremacists have exactly the same process. They have chosen, or their rabbis and politicians chose for them, the Jewish values that back their stances. They’re just as Jewish as you.

Why does this matter? If our Judaism rejects racism and hate, why do we need to acknowledge those who choose to adopt those elements?

The real fight facing liberal Jews right now isn’t for justice for the Palestinians or for the survival of Israeli democracy, though those are both very important goals. The real fight is for Judaism itself. A Judaism that we can all own and recognize our values within it.

But to have any fighting chance, let alone hope of winning, we need to accept that the other side, the extremists, the fundamentalists, the racists, have a claim to Judaism as well. And that we’re fighting this battle on those terms. Because if we don’t, if we continue to claim that our selective version, compatible with Western norms of the 21st century, is the only Judaism, we’re not that different from them.

You can’t argue that as Jews who yearned for and believe in a return to our homeland, we must recognize the Palestinians right of return as well, unless we accept that as Jews we could also believe that it’s our right to ethnically cleanse them, because “if you do not dispossess the inhabitants of the land, those whom you allow to remain shall be stings in your eyes and thorns in your sides, and they shall harass you in the land in which you live” (Numbers 33 55). It is written, as well.

Our claim has to be that Judaism is a pragmatic and evolving tradition, and it’s a claim that is well-founded in history. Not that our choice of what parts of the Torah and Talmud we prefer to cling to is the only acceptable one, simply because it seems more moral to us and our like-minded non-Jewish contemporaries.

Because the flaw in their Judaism isn’t that it’s immoral. They couldn’t care less about enlightened Western morals and, let’s face it, they may be a minority right now, but they’re having much more babies than you are, and growing not just in Israel, but in America as well.

If you insist on identifying as a Jew, then you have to be prepared to accept a whole lot of other despicable Jews as being equally authentically Jewish as you. We can’t get around to building a better Jewish identity without confronting, rather than denying, those other identities as Jewish, too, hateful as they are.