It’s the meal at the end of a day’s fast – but what happened when our writer invited some strangers to share the experience? 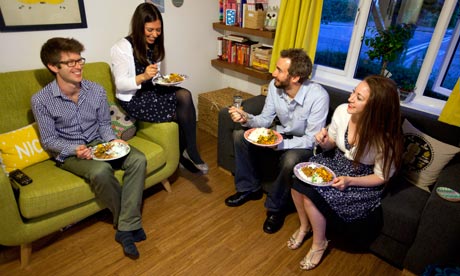 Huma Qureshi (centre) with her husband Richard and her guests, Jack and Jenni.

I have two strangers coming for dinner. This is nerve-racking: who in their right mind invites strangers into their home? Also, I’m worried I’ve over-seasoned the curry I’m making, but there’s no way of checking: I’m fasting so I can’t taste as I go.

I’m taking part in Dine@Mine, an initiative set up by 25-year-old Maryam Douale from Manchester. The idea is that Muslims host an iftar (the meal with which you open your fast) for non-Muslims, to forge better understanding over food. “Ramadan at my house is loud, fun and full of love and good food,” Douale says. “It’s my family at its warmest and best. I thought what if we could give non-Muslims a chance to see what a normal Muslim family is like? Food plays such an important role in cultures and traditions … it brings people together”

My guests, Jack and Jenni, live nearby. I email to say we will break our fast at precisely 8.49pm, while my husband, Richard, wonders helpfully if it’ll be “really awkward”. Meanwhile, I have a meal to prepare. I think of what I grew up with in Ramadan, my mother’s big steaming pots of hearty, spicy Pakistani food. 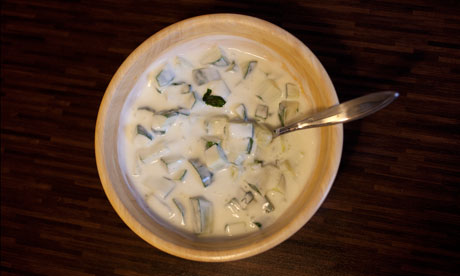 After a thorough phone consultation with her, I settle on my dishes: salaan (a yoghurt-based chicken curry infused with heaps of coriander), sabzi (a vegetable curry of chickpeas, spinach and potatoes) and muttar pilau (peas and rice) with mint and cucumber raita on the side – particularly satisfying when your tastebuds haven’t been used all day. I skip the deep-fried pakoras and samosas that feature at most iftars as I find them heavy after a day’s fast and for dessert, I’m including a good old British fruit crumble to reflect Richard’s background. We’ll open our fast the traditional way, with a date and water, a practice that goes back to Islam‘s beginnings. (And dates give the instant sweet energy rush needed after a day without food.)

Jack and Jenni arrive. We offer them elderflower drinks, explaining we will wait until we’ve opened our fast, but they say they want to wait with us. Although they haven’t fasted ahead of the meal, they are excited about joining in: “When would I ever get the chance to experience any part of Ramadan?” Jenni asks.

At 8.49pm, Richard passes the dates round. Then we help ourselves – there’s no formality with Pakistani food. Our guests’ plates are laden with rice and both curries, and, reassuringly, they both want seconds. Jenni asks what we normally eat in Ramadan, and I confess that when I lived alone, I’d gorge on pasta, which left me bloated after a day without eating. Now I cook Pakistani food for special occasions – after a day’s fast, there’s nothing like it.

I was worried the experience might put us on show – Look! Here are Muslims who fast! – but it hasn’t at all. Friends and colleagues are intrigued about Ramadan but shy of asking questions and I want our guests to feel they can ask anything. Being used to fasting, I forget this is what baffles people most. “Do you really get up at 3am? Is it like a midnight feast” asks Jenni, who thinks sehri, the pre-fast meal, sounds “magical”. I tell her that eating bagels while half asleep is quite mundane. They’ve been reading up on Ramadan, and instead of bringing flowers, made a donation to a charity for the homeless.

Religion can be one of those subjects you steer clear of at dinner with strangers, but in this context it’s easy to be open and honest with our views.

The simple act of sharing a meal together has laid down the foundations of a new friendship – Douale will be pleased to hear we’re going over to theirs for dinner after Eid. 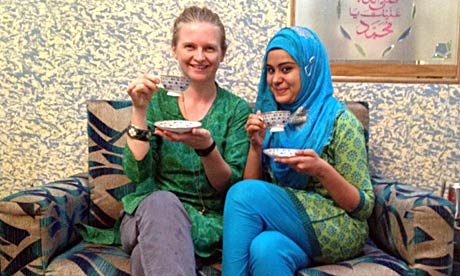 When I put out a random tweet angling for an invitation to iftar in Delhi, I never really expected a response. But two weeks later I found myself waiting for Ayesha Nusrat, my 23-year-old hostess, self-conscious in a headscarf and salwar kameez outside the Jama Masjid, the enormous 17th-century mosque in Old Delhi.

It was a few hours before sundown, so Ayesha took me on a tour inside. Despite covering my blonde hair, I resolutely failed to blend in. Ayesha shooed away the teenage boys photographing me on their phones and told a particularly aggressive hawker that I would not be paying 300 rupees to enter a place of worship.

After prayers, the sky started to darken. Hundreds of families spread picnic blankets in the mosque’s huge courtyard, an expanse of scorching marble which can accommodate 25,000 prostrate worshippers. But we weren’t dining alfresco – we had a rendezvous with Ayesha’s friend Adam Mohammad.

Adam’s family lives above one of their restaurants, a five minute walk from the mosque’s main gate. Dodging cycle rickshaws, stray dogs and cow dung, we trooped past beggars who were crouched outside, waiting for the free meals Muslim restaurateurs dish out to the hungry during Ramadan. 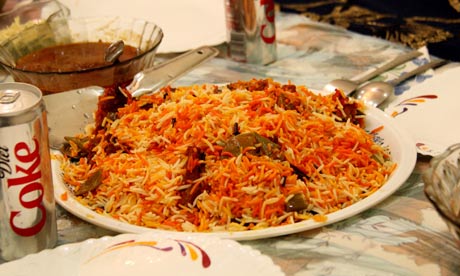 Inside, iftar began with a simple date, copying the prophet Mohammed, who broke his fast in this way. Then it was lamb samosas and pakoras stuffed with paneer cheese, juicy mangos and watermelon, washed down with rose water. There was a brief pause while everybody went off to pray on the roof, and then we were off again: goat biryani, crispy fried chicken, pan-fried parantha flatbreads, fluffy milk naans and my favourite, chicken changezi, a tangy mughal curry with a thick tomato and citrus gravy. I was amused that we were given Diet Coke to accompany this obscenely calorific spread, but it hurt to laugh. I’d already had to undo my trousers (“top tip: elasticated waistbands” whispered Sandhya, another guest).

But it wasn’t over yet: next came pheerni, a pot of rice pudding with pistachio shavings; and sheermaal, a sort of waffle dripping in sweet butter. Finally, a cup of milky chai and a bowl of homemade mango ice cream.

Can food foster inter-religious understanding? Having finally digested my dinner five days on, I think so. As well as godless me, Ayesha had invited her Hindu boss and a Buddhist colleague from the Tony Blair Faith foundation. We talked about all sorts – I explained how my parents give up alcohol for lent; Ayesha told us why she decided to wear a hijab on her birthday this year. I learned that if I am ever peckish near a Sikh temple I should ask for “halwa” (also halva), a sweetened wheat dish flavoured with cardamom and nuts. And that next time I am invited for iftar, for the sake of my gut if not for God, I should fast beforehand too.