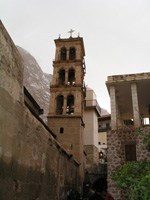 Under the guidance of Pope John Paul II the Catholic Church provided significant leadership in promoting peace, justice and harmony among religions. Now the new Pope, the most revered figure in the Catholic world, infallible to his followers and the representative of God to his co-religionist is choosing a path of dialogue with Muslims that seems disturbing.

In a recent speech he decided to quote a 14 century monarch in his argument about Jihad. The quote of the emperor was a political statement within the context of his relations with the emerging Ottoman dynasty, not worthy of giving any credibility. Yet, the Pope chose to repeat it.

If the speech writers of Pope Benedict XVI had looked at a book the “Spread of Islam in the World: A History of Peaceful Preaching”, written by a prominent 19th century historian Professor Thomas Arnold, they might not have quoted the passage of the emperor.

Stronger than the book are the words of Prophet Muhammad (pbuh) himself with regard to Christianity. In 628 CE he sent a charter of freedom to the monks of St. Catherine Monastery in Mt. Sinai. If Pope Benedict XVI or his speech writers had looked at this document they would have found a different image of the Prophet.

This document consisted of several clauses covering all aspects of human rights including such topics as the protection of Christians living under Islamic rule, freedom of worship and movement, freedom to appoint their own judges and to own and maintain their property, exemption from military service, and the right to protection in war.

Here is the letter written to the monks. This letter was written at a time when no one was talking about freedom of religion, pluralism or protection of human life.

“This is a message from Muhammad ibn Abdullah, as a covenant to those who adopt Christianity, near and far, we are with them. Verily I, the servants, the helpers, and my followers defend them, because Christians are my citizens; and by Allah! I hold out against anything that displeases them.

No compulsion is to be on them. Neither are their judges to be removed from their jobs nor their monks from their monasteries.

No one is to destroy a house of their religion, to damage it, or to carry anything from it to the Muslims’ houses. Should anyone take any of these, he would spoil God’s covenant and disobey His Prophet. Verily, they are my allies and have my secure charter against all that they hate.

No one is to force them to travel or to oblige them to fight. The Muslims are to fight for them. If a female Christian is married to a Muslim, it is not to take place without her approval. She is not to be prevented from visiting her church to pray.

Their churches are to be respected. They are neither to be prevented from repairing them nor the sacredness of their covenants. No one of the nation (Muslims) is to disobey the covenant till the Last Day (end of the world).”* 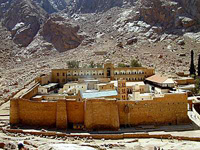 Saint Catherine Monastery is located in Egypt’s Sani desert. Saint Catherine city is famous for its various sites, e.g. Firon village. Firon is considered a garden rich with the best kinds of fruits of special taste, such as apricots, peach and cantaloupe in addition to the best kind of olives. Furthermore, the city houses Maktab Valleys that is located near Maghara Valleys, besides thousands of unique historical engravings.

In addition, Saint Catherine area is famous for the matchless locations of residential villages, dating back to thousands of years. These villages include Prophet Saleh’s (PBUH) site, that is called al-Marwas, Sheikh Mohsens site, and Sheikh Awwads site.
Alexandrian Saint.

The Monastery was built in the 6th century A.D or the 4th century A.D., according to some sources. It is located at the foot of Mount Sinai on one of Wadi al-Sheikhs branches, and rises about 5012 feet above sea level. In 545 A.D, the Monastery was constructed by King Postilianos as a fortress for Sinai monks. It comprises several monuments that presumably date back to the Christ’s era. In addition, the monastery houses a large library that is south of the big Church.

It consists of three adjacent rooms and which comprises about 6000 old historical, geographical and philosophic manuscripts, written in Greek, Syriac and Arabic.

Many of the monastery manuscripts were written in different languages other than Arabic. As for most of the Christian heritage, it was written in Arabic, especially the copies of the Old Testament and the New Testament (The Bible).

With the help of the Metropolitan Museum of New York, a new museum has been recently inaugurated inside Saint Catherine Monastery. The new museum houses distinguished collections of rare books and volumes written in Greek, Coptic, Syriac, Latin and Arabic, and they date back to the first seven centuries A.D.

Among the major acquisitions is an important document, dating back to the year 2 A.H. It is al-‘Ohda al-Mohamadeyas; a document signed by Prophet Muhammad (pbuh), to guarantee full protection for the monastery and Egypt’s Christians. In 625 AD, the Popes of the old monastery went to Prophet Muhammad  in Al-Madina, for discussion. The result of this discussion was this document.

Fortunately, all these acquisitions and monumental treasures were kept in a dry clean weather in the heart of Sinai desert for long centuries. Thus, they are still in a good condition. Furthermore, the monastery is notable for being a huge artistic, historic and religious wealth, including Bizantine icons that were painted by the monastery monks, dating back to the period from the 6th to the 9th centuries A.D.

In addition, it houses several other historical manuscripts that serve as references about emperors, chief monks, leaders and sultans. All these manuscripts date back to the period from the 4th to the 7th centuries A.D. Among the treasures found in the library is the time-honoured Syriac-registers that dates back to the year 400 A.D that was rewritten during the 7th and 8th centuries. Collections of manuscripts that total about 5000 copies are preserved in the library, dating back to the early years after the invention of printing.

It goes without saying that the document of al-O’hda al-Mohamadeias, signed by Prophet Muhammad (pbuh), is one of the most significant acquisitions in the library.