You Are Here » Home » Miscellaneous » Topical and Current Affairs » Rumsfeld, the Neo-Cons, and al-Farābī 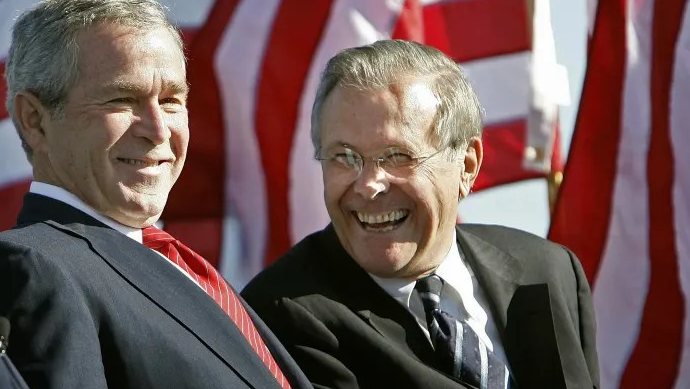 One of the most evil henchmen of the ‘War on Terror’, and someone directly responsible for the deaths and torture of millions of innocent people around the world, has returned to his Lord and shall meet his fate. I refer, of course, to Donald Henry Rumsfeld (1932- 2021), a career politician who was involved in American politics since Eisenhower’s administration in the 1950’s. It was Rumsfeld who recruited many of the politicians of the so-called ‘Neo-con’ movement (including the most diabolical of them all, Dick Cheney) to be a part of Bush’s administration. It was Rumsfeld who was the single most instrumental person to push for the invasion of Iraq. It was Rumsfeld who explicitly signed off on the ‘torture memos’ that allowed all types of heinous acts of torture against (mainly innocent) Muslims. And it was Rumsfeld who concocted the blatant lie (and known to him and almost all others in the administration to be false) that Iraq had ‘Weapons of Mass Destruction’.

In terms of simple quantity, the number of people who were killed as a direct result of Rumsfeld’s policies is exponentially higher than those killed by al-Qaeda, ISIS, and all the radical jihadists groups combined. The most conservative estimates calculate that over a million people have died as a direct result of US invasions of Iraq and Afghanistan; in contrast, the ‘radical terrorist’ groups have directly caused the deaths of (only?) tens of thousands. This is in addition to a long list of other issues that Rumselfd is responsible for, such as the destruction of the Middle East, the refugee crises, miscellaneous war crimes and the justification of brutal torture.

It is very interesting to note that there is an indirect and somewhat tenuous linkage between Rumsfeld and his political ideologies, and the Muslim philosopher al-Farābī (d. 950 CE). (This is a topic worthy of a much longer talk – I’ll summarize some key points here and perhaps elaborate more in a later lecture). Rumsfeld belonged to what is called the ‘Neo-conservative movement’, a radical extremist political movement that championed the notion that American ideals and democracy were so virtuous that America had a moral right to go to war and intervene in other lands to forcefully impose such values around the globe.

The main intellectual who sparked this movement is Leo Strauss (d. 1973), a Jewish emigrant who fled Nazi Germany and laid the foundations of a new political ideology while he taught political science at the University of Chicago. Some of the Neo-cons, like Paul Wolfowitz, studied directly under him – the rest, like Rumsfeld, were influenced by his views. Strauss was an academic, not a politician, and also an expert on Jewish and Islamic philosophy. One of his favorite figures was the Muslim philosopher al-Farābī (d. 950 CE), and he wrote a number of treatises on him.

Al-Farābī championed the notion that the prophets and philosophers both speak the truth, but that the philosophers speak it in plain language, whereas the prophets hide it in symbolic language because these truths are too difficult for the masses to understand. The Muslim academic and professor Fazlur Rahman coined the phrase ‘pious lies’ to explain this concept: people like al-Farābī essentially advocated that the prophets were knowingly saying untruths (such as a God who hears them and shall reward them with a literal Heaven and Hell) because they realized that this was the only way to motivate their peoples to be morally pure. Although al-Farābī never explicitly accuses the prophets of outright ‘lying’, essentially his point is that prophets are leaders who understand that the only way to better humanity is via such untruths, and he argues that prophets tell such untruths not for their own good but for the benefits of their people. Basically, the ends justify the means in this case.

Strauss developed these notions and applied them in developing his theories of political philosophy. Sometimes, the people had to be told untruths for their own good, in order for their societies to flourish. The people themselves might not realize this good, but that is why shrewd and wise politicians had to take charge and, if need be, engineer the circumstances required to push their agendas for the greater good of their own peoples. And this paradigm is what let to the outright lie of ‘Weapons of Mass Destruction’, because the Neo-cons believed that it was morally right for America to take control of the oil of the Middle East, and to enforce their versions of democracy on those regions, even if they had to bomb people to free them.

S. Drury, a professor who wrote a number of works on Strauss, writes, “Leo Strauss was a great believer in the efficacy and usefulness of lies in politics. Public support for the Iraq war rested on lies about Iraq posing an imminent threat to the United States: the business about weapons of mass destruction, and a fictitious alliance between al-Qaida and the Iraqi regime.” Of course, Strauss himself was not involved in the Iraq war (he died 1973). It should also be stressed that many of his students claim that even his teachings have been perverted by the Neo-Con movement, and that he himself would never have advocated such violence. Be that as it may, it was a group of politicians who admired him who happened to be in control of the White House when the events of 9/11 occurred. It was this group, the Neo-cons, who championed these lies…and the rest, as they say, is history.

Rumsfeld infamously remarked that sometimes the truth needed to be defended with a body of lies. And that Straussian thought, cruelly adopted, modified and developed from the theology of a medieval Islamic philosopher, was what justified his delusional belief that it was morally permissible to lie to the American people and invade country after country, all for the ‘greater good’ of his cause.

May Allah deal with him and all of his henchmen with His Infinite Justice.

Note: the above narrative is one interpretation, and is contested. Some people deny the very existence of a ‘Neo-con’ movement; others claim that Strauss’s influence is exaggerated, and yet others claim (perhaps with more truth than the previous claims) that Strauss himself would never have agreed to such an application of his thought and that this new wave of his followers has perverted his teachings.

For more information, please read these articles:
– Leo Strauss and the Noble Lie: The Neo-Cons at War by John G. Mason
– Noble lies and perpetual war: Leo Strauss, the neocons, and Iraq by Danny Postel