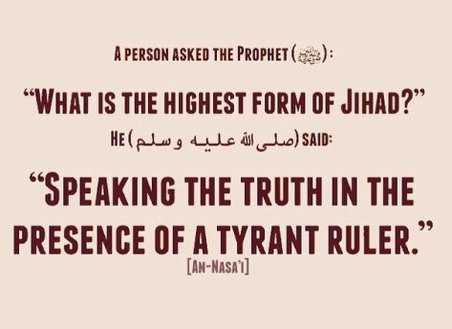 Many events in the history of Muslims indicate that the Muslim scholars changed the course of history by their influence and guidance of the ruling classes of Islam. Lets look at some of the incidents.

The name of Hajjaj Bin Yousuf is notorious for tyranny and high handedness. Once the name of Hazrath Hussain (may Allah be pleased with him) was mentioned in his presence to which he retorted: “He was not included in the progeny of the Holy Prophet (peace be upon him).” Perchance the scholar of Islam, Imam Yahya Bin Yamar was present in that meeting, he at once spoke out:

Hajjaj said: “Prove your assumption from the Holy Quran or else I shall get you assassinated!”

“Do I commit any mistake of accent in my recitation of the Holy Quran?”

Historian Ibne Khalqan said that Hajjaj was so much pleased at this utterance of truth that he appointed Hazrath Yahya as Qazi (Judge) of Khorasan.

Once the Abbasid Caliph, Ha’roon al Rashid and the Princes went to hear the lectures of Imam Malik (may Allah have mercy on him). He said to the Imam: “I shall recite the Hadith and you may hear, but you send away the common people from in front of you.“

Imam Malik replied said: “If the commoners are deprived because of the very important persons, even the VIP, shall not benefit.”

The Imam asked one of his pupils to recite the Hadith, which he began. The Caliph kept quiet.

4. The Outspokenness of Imam Auzai.

Imam Auzai was a religious leader of Syria. Once Abdullah Bin Ali, an uncle of Caliph Saffah Abbasi, asked him:

“What is your opinion about the blood shed of the Banu Ummayads at our hands?”

Imam Auzai tried to avoid a reply. But when Abdullah Bin Ali insisted on a reply, he said:

“By Allah, it was unlawful for you to shed the blood of the Banu Ummayads!”

Abdullah Bin Ali was a very hot tempered man, on hearing this reply he was red with anger.

Imam Auzai replied: “The basis of what I said is the saying of our Holy Prophet (peace be upon him) i.e., the blood of any Muslim is unlawful except under the following three conditions:

1. He should be guilty of fornication despite being married.

2. He may have assassinated anybody without lawful provisions, and

3. He should be an apostate and guilty of forsaking Islam.”

Again Abdullah Bin Ali asked: “Is not our government a religious government?” The Imam put him a question: “How is it?”

Abdullah replied: “Did not the Holy Prophet make a will for Hazrath Ali (may Allah be pleased with him) ?”

The Imam replied: “Had any will been made. Hazrat Ali (may Allah be pleased with him) would not have asked for an arbitrator.”

After this talk the learned Imam was sure that he would be beheaded. Abdullah Bin Ali was in a bad mood and he made the Imam leave his court. However, as an after thought, he sent him a bag full of Dinars (gold coins) to Imam Auzai which the Imam immediately distributed among the deserving people.

Such events of outspoken truth and courageous conversations in face of men of authority are numerous. Those scholars who were pious and dauntless kept up the practice of timely criticism of un-Islamic or anti-Islamic actions and orders of the men of authority. That was conducive to limiting the lawful influence of these despotic rulers.

The Abbaside caliph Al-Ha’di desired to nominate his son as his successor before his death. He called for a meeting of the  dignitaries of the state to obtain their approval. This decision would have deprived Haroon Rashid, his brother, of the office of caliphate.

The dignitaries kept quite and withheld their opinion. But Harsama Bin Aa-Yein, a religious scholar, made courage and spoke out the truth boldly, saying: “O Caliph! Your proposed step is wrong. Your father had made you and your brother Haroon Rashid – both successors – one after the other. Now that you are disregarding the will of your father to bestow caliphate on your son and deprive your brother, what guarantee is there that your wrong decision will not be altered after your death?”

Hadi was so much impressed by the candid speech of Harsama Bin Aa-Yein that he addressed the audience in anger and said:

“Woe to you all who have deceived me. Only my master (Harsama) has expressed the truth and has been my well-wisher.”

The outspokenness and dare of Harsama had saved the Ummah from a great political turmoil.

6. When Qazi Yahya Bin Aksim spoke up against the Shi’aa doctrine of Mut’a marriage / fornication.

Incidents taking place between Caliph Mamoon Rashid and Qazi Yahya Bin Aksim are quite well known. Once Mamoon dictated a state circular to the effect that “Hazrat Muawiyah Bin Abi Sufyan may be cursed”. Qazi Yahya immediately interfered and the state circular was cancelled. Similarly the Shi’a doctrine of Muta’a (marriage for a fixed brief period) was being promulgated by Mamoon who was inclined towards Shiaism. Qazi Yahya immediately appeared before the audience of Mamoon and told him tactfully that there was no difference between fornication (Zina) and Muta’a (temporary marriage) under clear injunction of the Holy Quran. Mamoon at once admitted his mistake and the institutions of Muta’a (temporary marriage) was made unlawful. The positive corrective role of the religious scholars was not confined to the Banu Umayyads and Banu Abbas caliphs. The truthful and bold scholars of Islam played a constructive role in all the countries when Muslim rulers held the government.

The famous Egyptian King Rukn ud Din Baibris (Baibars) was very majestic and glorified. On one occasion he called upon the Muslims to pay more money for the Jehad (Holy War) than was normally fixed under the Rules.

Allama Nowi, famous commentator of the.“Sahih Muslim” opposed the king tooth and nail and said to him:

‘‘I know that you slave purchased by Amir Band Qadaar and you did not own a penny. Now that Allah, the Almighty, has granted you kingdom, you have purchased thousands of slaves, whose ornaments are made of gold. In your palace there were 100 maid servants who are laden with jewelry. Until I am convinced that you have taken away all that gold and all the jewelry from your slaves and your maid-servants for the expenses on Jehad, I cannot write a Fatwa in your favor to extort money from the poor Muslims in the name of Jehad”.

Baibris was infuriated at the daring speech of Allama Nowi and exiled him from the capital city. Later on he realized his mistake and cancelled the order of exile against Allama Nowi and asked him to return settle in Damascus. But the great Allama rejected his offer and said “I shall not return till Baibris is alive”. Only a month later, Baibris died.

8. The Forthrightness of Allamah Ibn Taymiyyah and his refusal to sell Shari’at.

During the caliphate of Abbaside caliph of Egypt, al-Mustakfi Billah, the non-Muslim subjects put in a petition requesting for cancellation of certain peculiar laws applicable only to the Muslims. They offered to pay him 700,000 Dinars every year for this favour. The caliph and his minister both were inclined to but Allama lbn Taymiyyah intervened and said:

“The injunctions the Shariat Law of Islam cannot be sold away for any amount”.

The caliph had to agree to the ‘Fatwa’ issued by the Imam, much to his dislike, He rejected the petition of non-Muslims.

9. The Story of Shaikh Jamali.

In the Usmani dynasty, Sultan Salim I was the first the first Monarch. Once he called upon the Grand Mufti of his empire, Shaikh Jamali and asked him: “Is it better to conquer more lands or to convert non-Muslims to Islam?” The Shaikh replied: “To make them embrace Islam is a better act”. After this verdict the Sultan general orders that whosoever did not embrace Islam, he shall be killed. On knowing about this proclamation the Mufti at once went to the Sultan and told him that his proclamation was against the Holy Quran. The non-Muslims should be left with liberty about their faith if they pay the Jizya Tax. The Sultan cancelled his proclamation and the Muslims were saved from great sin and tyranny.

A Few Other Incidents.

1. Sultan Sanjar used to follow guidance of Imam Ghazali in all matters.

The rightly guided scholars of Islam not only criticized and corrected the rulers of their times, they also wrote books and constitutions for the permanent guidance of the rulers.

4. Imam Abu’ Ubaid ul Qasim wrote a voluminous book “Kitab ul Amwal” for the same purpose. In the first chapter of his book, the Imam discussed the mutual rights of the rulers and the subjects.

5. A treatise written by Imam Malik is also well known. It was a letter addressed to Caliph Haroon Rashid in which useful counsels were given.

Apart from corrective actions for the reformation of the ruling classes, the scholars of Islam also kept vigilant eyes on the
causes of error in dogma and action created by foreign influences.

6. When waywardness and open lewdness and disobedience to divine injunctions increased in Baghdad, Khalid Rawaish set up a reformatory association to meet the challenge of mischief mongers. A similar body was constituted by Sahal Bin Salam Al Ansaari. The aim and purpose of both the reformatory bodies was to eradicate the causes of mischief and evil in the Muslims and to provide them an effective bulwark against the forces of disintegration.

7. The role of the Hanbalies in effectively curbing the menace of the evil sects of their time can not be over-praised. Our great scholars like Imam Malik, Imam Ahmad Bin Hanbal and Imam Abu Hanifa steadfastly bore all hardships of whipping and imprisonment to save positive Islam from pollution.

8. Mamoon Rashid as his nature was very tolerant and moderate in his religious views. Yet he could not bear the activities  of the apostates. He dealt with them as harshly and as effectively as caliph Mehdi had done.

[Sources: History of Islam,  and  theijtema.com]