You Are Here » Home » Miscellaneous » Topical and Current Affairs » See Their Children Laid Out, Dare to Talk About Israel’s Responsibility 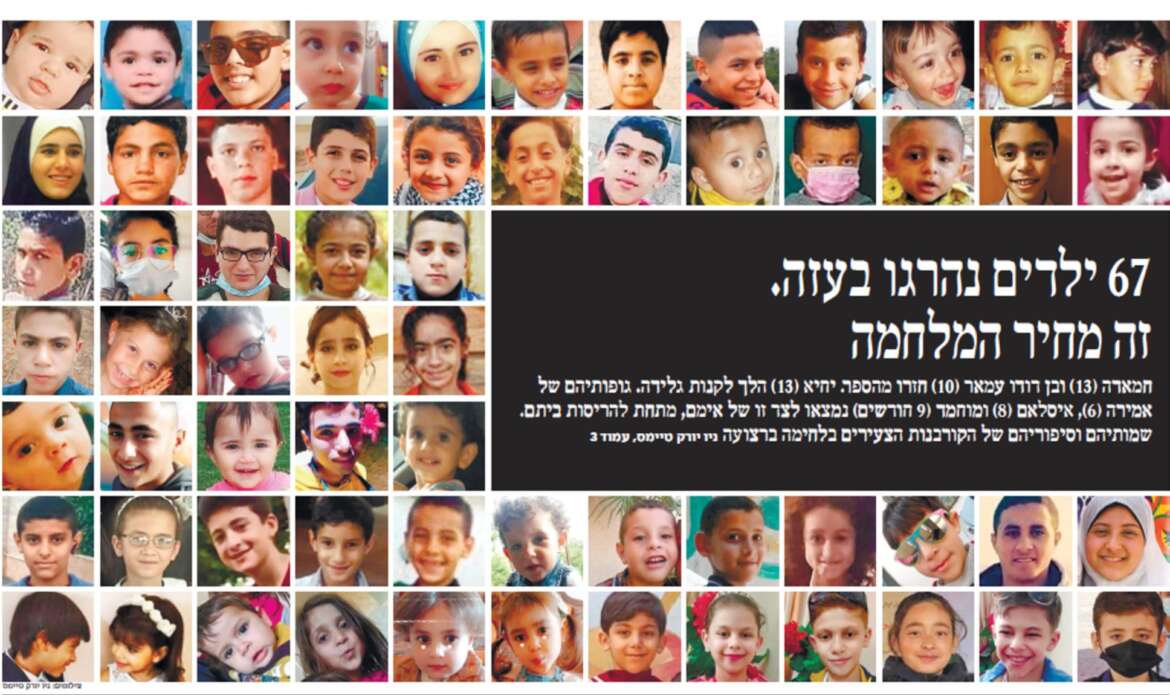 (above pic : The front page of Haaretz Hebrew on Thursday)

On Thursday, I felt great pride in being a Haaretz reader – and writer – and deep shame at being Israeli. The front page of the newspaper that day should have been put on display at Israel’s air force bases, so that the pilots and their assistants and the corps and squadron commanders see it.

What would 1st Lt. Gal feel – the pilot interviewed by Yedioth Ahronoth, that mouthpiece of the IDF Spokesman’s Office, at the end of this month’s military confrontation with Hamas. He had told the newspaper that he “felt relief” after dropping the bombs on Gaza? Would he still feel that same relief after seeing his handiwork – the photographs of the 67 dead children on the front page of Haaretz? Would the only “mild shock” felt by that bombing machine called a pilot still be the moment in which he dropped the bombs, as he recounted it – or would the sight of the photos of the dead children engender some other emotion in him that might keep him from carrying out such a despicable mission again?

The pictures are shocking in their cumulative magnitude. All of the propaganda about the “most moral” and “the best going to the air force,” about “surgical airstrikes” and warning knocks on the roofs of Gaza suddenly dissipate in the face of these photos. The gleaming smile of 10-year-old Rafeef. The face mask worn by 9-year-old Amir. Mohammed, who would never even celebrate a single birthday. Eight-year-old Islam’s colorful sunglasses in the last picture of him, which may also have been the first.

These photographs are more convincing than a thousand hollow Israeli propaganda speeches about self-defense, about Hamas’ guilt and about how there was no alternative. That’s the ultimate, singular result, before which only pilots and other brainwashed Israelis can remain unmoved and even speak of their “relief.”

After the first shock came the second, only a bit less than the first: the reactions in Israel. If anyone had still doubted the extent of the denial and psychological repression in which Israeli society has been living, anyone who had doubted the seriousness of its moral sickness, the reactions to the front page proved it. This society is very sick. The debate in the media and on social media erupted like a brushfire. It was wild and instructive.

Israel was avoiding the dreaded tidings like the plague. No one was talking about the dead children, about the horrifying dimensions of the killing and about the army that committed it. That was not the topic in the least. In an amazing acrobatic display, Israelis summoned up everything they had and more to avoid the truth, evade responsibility and carry on with their usual self-congratulation.

There was only one thing that no one dared talk about: Israel’s responsibility, the guilt of the Israel Defense Forces, the pilots’ role and the part shared by every Israeli, from Prime Minister Benjamin Netanyahu on down, in moral responsibility for this killing of children.

Under the auspices of its pitiful media outlets, an entire society was enlisted as one, shoulder-to-shoulder, to evade any responsibility, to deflect any blame, to accuse the entire world, to dispel any doubt and say: It is not by our hands that this blood was spilled. But the bitter truth is that it was only by our hands.

There is no other way to present it. There is no other truth to put on display. One can say that this is what happens in war and even think that if it were not for Hamas, this war would not have erupted – which is very doubtful – but placing the entire blame on the victim is a new record in Israeli contemptibility. Not even a word of regret? Pain? An iota of responsibility? A hint of guilt? Compensation for the families?