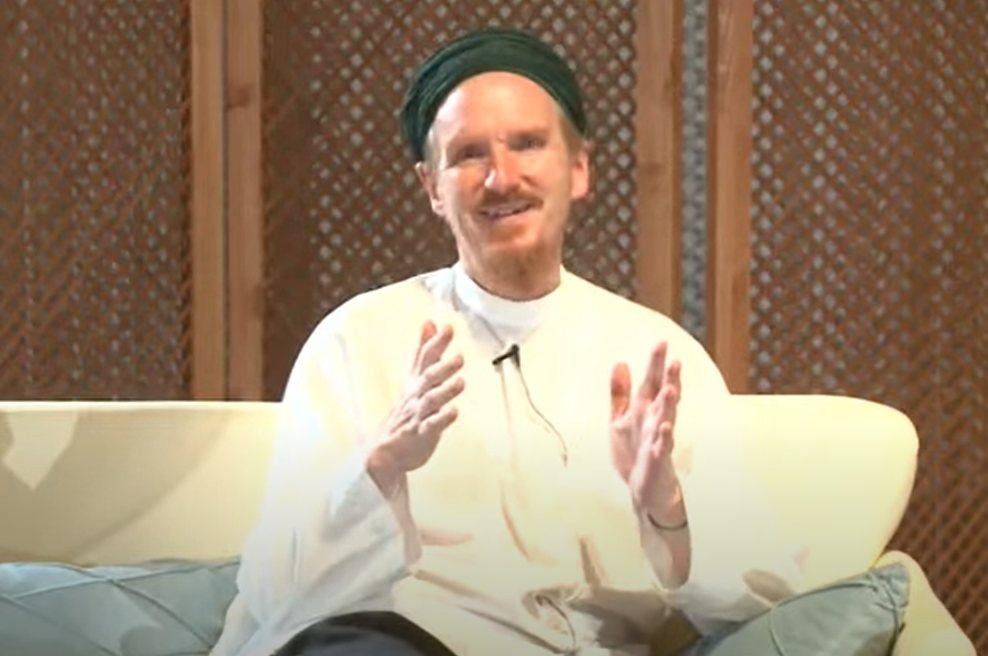 The challenge that we face as human beings is always to see the amazingness of the moment. A lot of modern anxiety issues, depression, bipolar, whatever is happening out there in society. There’s a general sense of dissatisfaction – caused by the fact that at a very early age people’s mental circuits have been overloaded by extreme spectacles. At the age of four, they’re watching a James Bond motorbike chase or something and the brains are racing and by the time they’re 14 well, “been there done that”, jaded, very sad. They’ve just been overloaded because the entertainment industry uses the most extreme visual experiences in order to make us not turn over when the advertisements come or whatever it is. Not good for us.

Childhood should be a time of protection from extreme experiences. From images of sexuality, from bloodshed, from torture scenes, from the stuff that a lot of young people are accessing at school now. So they get into a tunnel when they become teenagers which is really when discovery should be happening. But in any case we have this and one necessary consequence should be that we try and figure out how we can keep people enthused when they’ve already at least seen everything that’s extreme and their lives are kind of plodding, that might be tempted to do something extreme which is not a good temptation.

But nobody has ever said go within because that’s actually more interesting. The soul stuff is always more interesting. If you have a great romance and it really is a good romance, and two souls have met, what you will remember after it’s over is probably the times of real human togetherness, rather than whatever might have been the physical side of it. In other words that when the souls are together, we really are alert and alive and the dunya distractions tend to be lesser.

It is through relationships, it is through having quality time with people that we actually experience that healing and we accumulate memories so that in old age we look at photographs and remember, “ah, we were actually together, that was a good relationship, that was a good day, there’s the family”…….  nowadays what pictures will we have ? the selfie,  “I’ve got on my phone 700,000 pictures of myself”.  Yeah, so you’re old and do you look at all those pictures of yourself, well no. What we really need is reminders of moments of relationality because we are social beings and ‘deen muamalah‘ – religion is engagement with others and also the engagement with the unique and irreplaceable wonder of the moment.

Ours is an age that has overloaded us so much with artificial images of wonder and spiffy amazing modern buildings and jet fighters and so forth that we actually no longer focus on the one that is the moment. Which is a specifically religious instruction. And it shouldn’t be difficult. One thing I like to do when I’m traveling, not everybody I travel with thinks it’s the best thing to do, is to goggle at babies. I like to look at babies because I like to see how babies are looking at the world. Airports are generally mediocre places. No signs of god within sight. They’re designed to be nowheres. But a baby is interesting. Look at the baby’s face. The baby is kind of looking what’s going on, the baby is thinking even the womb was pretty weird and unlikely but this is ;

“whoa this is really weird. What’s going on here. I look at my hands and wow look out of the window there’s even more outside the house even more of this stuff”

and those babies are not being stupid. They cry because they know they’re pretty vulnerable and the world is amazing and unpredictable and they laugh because the world is so unlikely but the babies have that because that’s the fitrah and we should be able to retain something of that sense of wonder. What’s the baby really saying, doesn’t really have too many words and doesn’t even have teeth yet but what’s it really saying with that sort of wise babyface, they’re saying :

“dad, did you know that the energy level of the proton is so precisely calculated that it becomes the basis for the stability of matter and all physical laws in the universe and that’s every single proton in the universe is subject to the same exact physical constants. That’s pretty weird dad”

that’s what the baby is saying but we’re not paying attention because we don’t see the world as wonder. We don’t see it as in every tiny little fraction of its total improbability. So the baby said

and dad is just saying put the dummy back in the baby’s mouth, what do you know ?

But that  is the real state that we should be in. Wonder, hayra, ta’ajjub, amazement at everything. but we’ve lost that, which is really stupid. Because science is telling us more and more about how brilliantly things are set up. Physical constants, gravity why is it at the level it is ? do we understand gravity ? not so much. Do we know why it’s set at a particular level throughout the universe? despite quantum relativity and black holes and weird stuff happening but laws that happen in the different galaxies. What are the chances? It’s really really really unlikely – it’s so staggeringly unlikely that we should be really paying attention. We should have the sense of wonder which is the basis of Imaan unless you’re going to go down the completely cracked atheistic route of saying well it’s here so let’s just enjoy it or deal with it, we don’t deal with the deeper questions which really is not satisfactory. The probabilities are too outlandish that this is where we are and wonder not just gives us a reminder of the fact that everything is profoundly and imminently meaningful and that the world is bigger and deeper than anything that our ancestors could have imagined. Pretty impressive. The Quran is saying, if only you understood the universe you’d see how great are these odes which Allah swears by it, So pay attention.

But the baby sees it and thinks is really weird and we no longer think that because we’re kind of used to it. We’re used to it’s like the mouse that’s used to the maze and doesn’t think about where it might be going or where it comes from or who made it. Just that’s where it is and that’s the situation that we’re in. This is one of the tragedies of the modern world in that we’re looking for billions of different exciting experiences and letters to put after our name and things to show about and show off about to ourselves and to our friends and running after things that are really beside the point and part of the scenery and not looking at the amazingness of being itself or wujud.

It’s an extraordinary thing, catastrophically unlikely so we should be laughing all the time. That’s why some of the Sufi said that the ugyar made them laugh, that which is not the divine – ten thousand things the stuff in creation so gigantically improbable and strange that it’s kind of humorous because what is it that that makes us laugh? Humor is based on that which is unexpected. Mr. Bean does something that makes sense but is unexpected and it’s crazy so we all laugh. The universe is precisely that, we should be amused by it and should be amazed. It should hold our attention all the time. Somehow we’ve got out of that habit and we’ve got into this kind of autopilot mode of just not noticing, which is unfortunate because even the secular mind can see how gigantically unlikely even comically unlikely it all is but they don’t pay attention.

So the real moments when we are actually alive are the moments when we are intuiting the extreme improbability and the unique amazingness of any given situation which is never replaceable. It’s another extraordinary thing about it why is there so much of it and why is every moment unique. Every human being is unique. It’s not the kind of universal,  just mirrors repeating each other, each bit of it is really different. So that’s what it is not to grow old in vain. To maximize the number of moments when you’re actually experiencing the amazingness of being. Not because you’re flying around on a wingsuit and adrenaline or the endorphins are giving you some kind of high but about seeing the infinitely more astounding and improbable fact of the moment and feeling euphoric as a result of that and as a result of that euphoria the virtue comes because you experience it as a gift. You experience it as wonder, you experience that as beauty in to the extent that you  want to kind of reach out to the other human beings are also experiencing the same thing or you want to help them to experience the same thing. You want to put them in the same perspective that you have. So they can see and see what’s astounding about the world and experience the world as a gift and Imaan, is just. Being grateful to the bistower  of benefactions

That’s what it is, it’s grateful and therefore it’s an appreciation of beauty. It’s about what is aesthetic. So to use one’s life correctly means not to accumulate a really fancy cv. You might do that, no reason why you shouldn’t have a good career but that’s not really what it is to be alive. What it is to be alive is to see the unique divine miracle of every moment in every person and every raindrop and whatever it is that you happen to be looking at and just to be like the baby goggling in astonishment and really being ibn al waqt, part of the moment and happy like the innocence of the baby who’s astounded and chuckles by all of it, even though sometimes we cry as well and that’s part of the babies wisdom.

So that’s where we should be when we’re old because if that’s what really makes your life significant you can do it even when the life-support system is almost turned off to the extent that you have your consciousness and you’re fitra. You can still be aware of the unique miracle of the moment, you can’t do the bungee jumping of the extreme sports or the drugs but you can experience that fullness of humanity and that is why old age is not something to fear for the believer because what’s most important for him will continue until the akhira when everything is visible in a much more extensive and beautiful and clearer way. In which case there’s even more amazement, even more laughter, but the unbeliever experiences diminution, shrinking his capacity to do those things that get the endorphins going – they diminish. It becomes secondhand – watches it on tv and then just kind of diminishes to a point like a little pointed light in the center of the screens of old-fashioned televisions and then flickers out. That’s growing old in vain, that’s not understanding what you’re here for, which is a great tragedy,