Lesley Hazelton – is  world-class historian and journalist—as well as the recipient of The Stranger’s “Genius in Literature” Award—she focuses on the politics, religions, and history of the Middle East.

When you’re deeply focused on your work, you forget how it looks to others unless like me you’re an agnostic to what you’re deeply focused on is Islam and you’ve just finished writing a biography of the Prophet Muhammad and your audience might be just a little bit nervous. The photo was taken this past summer at the Sheikh Zayed Grand Mosque in Abu Dhabi and yes that’s me in the middle. I never imagined myself in an abaya but it was required for entrance so I reminded myself that clothes do not make the woman and took a deep breath. 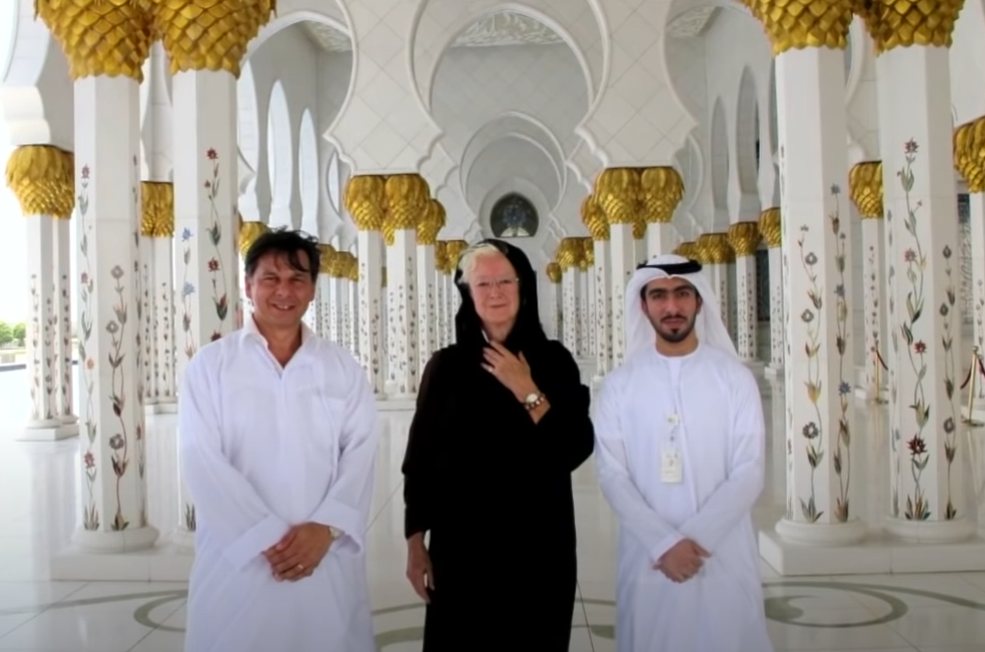 This seemed a rather large conclusion to draw from a snapshot.  So the photo evidently invites interpretation and the question is why ? What were the underlying assumptions here ? If I would put this on right now for instance, is this an act of honour or is it one of disrespect?  Is it a gesture of sympathy or is it merely presumptuous or does it make no difference what I say at this moment because all you can focus on is the fact that I’m wearing an Islamic headscarf in which case why is it so distracting?

How this is seen has little to do with me. It’s a function of your preconceptions and expectations and of the agenda that you then attribute to me and that’s a loaded word : agenda. It implies ulterior motives in which case let’s look at my motives. To the question of how come I decided to write about Muhammad, my immediate answer is “how not ?” We’re talking about one of the most influential figures of all time.  A man who radically changed his world and is still changing ours. So how can so many of us know so little about him? How come just the idea of writing about him seems to be fraught with tension. Welcome to my territory. The vast and volatile arena in which politics and religion intersect.

Consider the renewed atmosphere of distrust and bitterness this past summer for instance when a noxious little YouTube video caricaturing Muhammad sparked protests leading to dozens of deaths.  There were any number of agendas involved here. None of them good. That of the small-minded bigots who made the video in the first place. Small-minded bigots being a redundant phrase if ever there was one.   Of the Saudi finance TV station in Cairo that picked it up and made a big show of it thus insuring that while maybe 30 people have seen it before, now millions would. Of the once reputable news magazine trying to revive its fading readership by implying that all Muslims worldwide were rioting in the streets as opposed to a few hundred extremists and often just a few dozen, it’s amazing what you can do by cropping a photograph.

There is the leader of Hezbollah under attack viz support of the Syrian regime’s brutal war against its own citizens trying to redeem himself as a defender of Islam and the Pakistan Minister of Railroads trying to hide his corruption and ineptitude by offering a $100,000  bounty.  And the usual American Islamophobes putting up crude as and then posters in the New York and DC subways.

So many people jumping on the bandwagon but where was Muhammad himself in all this? Where was the man who listened to the Quran telling him and by extension all Muslims to pay no attention to taunts and mockery? Ignore them, it keeps saying, let them be, turn your face away, or in the words of Jesus, turn the other cheek.

While Muhammad has certainly been distorted by his detractors, he sometimes seems to have been equally distorted by the loudest of his self-proclaimed defenders which makes it all the more urgent that we know who he really was.

Yet the millions, if not billions of words, that have been written about him often seem to obscure as much as they reveal. the more of them I ploughed through the more felt as though he would be weighed down by the sheer accumulated mass of them. What I wanted was a real feel for the man himself. I wanted the vitality and complexity of a full life lived. I wanted in short to see Mohammed whole and this meant steering clear of a virtual minefield of agendas including piety and sentiment and stereotype and judgmentalism. So even as the hundreds of research volumes piled up on my floor, my most valuable research tool may have been this one-word reminder pinned beside my desk “THINK !“ 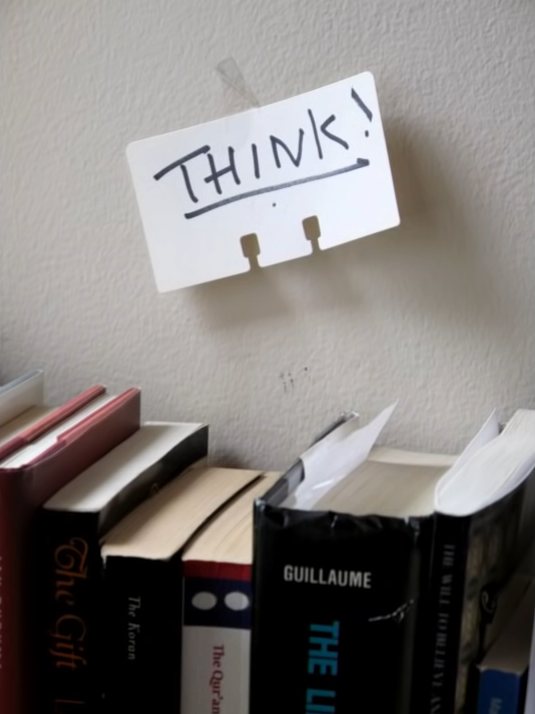 Take the pivotal moment of Islam for instance which is what happened to Muhammad one night in the year 610 on a mountain just outside Mecca. He’d gone up there it seems in the hope of perhaps a quiet moment of insight. The last thing he expected was the blinding weight of Revelation. So what struck me in the earliest account we have of that night was not even so much what happened as what did not happen

Muhammad did not come floating off the mountain as though walking on air.  He did not run down shouting “hallelujah”, and “bless the Lord”.  He did not radiate light and joy there were no choirs of angels, no music of the spheres, no elation no ecstasy, no golden aura surrounding him. Not even the whole of the Quran fully revealed but only five brief verses. In short he did none of the things that might make it easy to cry foul to put down the whole account as an invention. a cover for something as mundane as personal ambition. Quite the opposite.

In his own reported words, he was convinced first that what had happened couldn’t have been real. At best he thought it had to have been a hallucination. His own mind working against him. At worst possession and he’d been seized by an evil jinn. A spirit out to deceive him even crush the life out of him. In fact, his first instinct was to leap off the highest cliff and escape the terror of what he’d experienced by putting an end to all experience.

Whether you believe the words he heard that night came from inside himself or from outside, it seems absolutely clear that Muhammad did experience them and that he did so with a force that would transform his sense of himself and his world. So that initial panicked disorientation That sundering of everything familiar That feeling of being overwhelmed by force larger than anything the mind can comprehend strikes me as utterly real. It’s the only response that makes sense. It’s the only sane response. the only human one.

And this is what allowed me to begin to see Muhammad not as a symbol and not even as a subject but as a man.  A complex human being and to follow the extraordinary arc of his life from neglected orphan to acclaimed leader. From marginalized outsider to the ultimate insider.  From powerlessness to power.  One thing I knew from the beginning, however, if I was to do justice to this remarkable story if I was to bring it alive on the page, it had to be written in good faith.

Now I do realize there may be a certain irony in an agnostic standing here talking about good faith, but there’s been so much bad faith in every sense of the term and we have to get beyond it. All of us, whether we’re secular or religious, theist or atheist or anywhere in between, we are all impacted by the words and actions of extremists. What happens in one tiny corner of the world now reverberates globally. but whether we live in Tehran or in Tel Aviv, in New York or in New Delhi, we do have a choice. We can refuse.

Refuse that is, to allow ourselves to be led by anger and suspicion.  Refuse to allow ourselves to be manipulated by extremists of all stripes.  Refuse their narrow vision, their comic book distortions Their miserably small minds. We have to reclaim the narrative. The full narrative.  Beyond stereotypes, beyond snap judgments beyond head scarfs. Just as we need to see Mohmmad whole so we need to start seeing each other whole in, good faith

article title : Seeing Muhammad – and Each Other – Whole