New Saxon calls itself a “social networking site for people of European descent”; others have called it Facebook for neo-Nazis. It claims to host 8,436 blogs. There are at least four separate groups intended for current or former members of the U.S. armed forces. On one user’s profile, a list of “dislikes” begins with: “hajis, (aka sand niggers, durkas, arabs…. sure they have many names dirty fuckers.)” His “hobbies” section concludes: “Also working on my fitness/health, as any good WHITE male it is my duty to be ready when the time comes. Luckly I started off a Infantry Marine.” 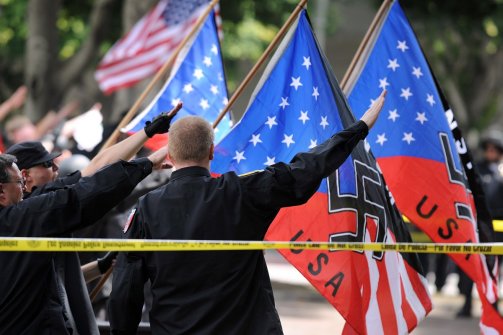 Members of the white power, The American National Socialist Movement, at a 2010 protest

After last week’s mass shooting at a Sikh Temple in Oak Creek, Wisc., those words seem even more chilling. The shooter, Wade Michael Page, was a “frustrated neo-Nazi,” turned cold-blooded killer of six, the perpetrator of what the FBI declared was an act of “domestic terrorism.” He was also a veteran of the U.S. Army.

In the days that followed, some of those who had been stationed at Ft. Bragg with Page in the mid 1990s came forward to say that even then he had openly espoused his allegiance to the white-power movement, and that if anything, his time in the military had made him more deeply committed to the cause.

For some of the researchers and analysts who’ve studied the ties between military service and right-wing extremism, the story was hardly a surprise. Daryl Johnson, who until 2010 tracked domestic terrorism for the Department of Homeland Security, told news outlets last week that when he heard early reports of an attack on a temple, he turned to his wife and said, “This is likely a hate crime perpetrated by a white supremacist who may have had military experience.’”

In 2009, Johnson authored a DHS report outlining how “[t]he  economic downturn and the election of the first African American president present unique drivers for rightwing radicalization and recruitment.”

The report included a section about “disgruntled military veterans,” warning that they were an appealing group to extremists, in part because of their military training. “The willingness of a small percentage of military personnel to join extremist groups during the 1990s because they were disgruntled, disillusioned, or suffering from the psychological effects of war is being replicated today,” it read, citing Timothy McVeigh, the veteran of Operation Desert Storm who killed 168 people in the 1995 Oklahoma City bombing, as an ominous example.

The report set off a firestorm on the right, with pundits calling it an attempt to smear or even criminalize right-wing free speech. Republicans in the House of Representatives called for Janet Napolitano to step down as head of the DHS. And House Majority Leader John Boehner said, “I just don’t understand how our government can look at the American people and say, ‘You’re all potential terrorist threats.’”

“Recruiters are knowingly allowing neo-Nazis and white supremacists to join the armed forces, and commanders don’t remove them from the military even after we positively identify them as extremists or gang members.”

“That report was spot-on,” says Mark Potok, a Senior Fellow at the Southern Poverty Law Center, a non-profit, left-leaning civil-rights organization that monitors extremists and militias. “Janet Napolitano, in an act of political cowardice, pulled back that report without any justification. What it said was unquestionably true.”

Asked about the connection between the military and extremists, Potok rattles off a history that goes back decades. In the mid-1980s, the SPLC went after Frazier Glenn Miller, a former Green Beret at Fort Bragg who was running a training camp for members of the Ku Klux Klan. Many of those involved in the camp, which focused on armed combat training, were active-duty Marines and soldiers, and Miller eventually went to prison for having stolen missiles, rifles, plastic explosives, mines, and some 14,000 rounds of ammunition from the military for use by the KKK.

In 1996, the organization reported on what Potok calls a “hive of neo-Nazis inside Fort Bragg,” after a black couple were murdered just outside it by skinheads who were in the military.  At the time, a billboard outside the base advertised and gave contact information for the National Alliance, a white supremacy group. It had been rented by Robert Hunt, a member of the 82nd Airborne Division who was actively recruiting for the alliance while stationed at Fort Bragg. (Wade was stationed at Fort Bragg at the same time.)

And in 2006, the SPLC published “A Few Bad Men,” which argued that Pentagon efforts to crack down on extremism within the ranks following the scandal at Fort Bragg had fallen short. Instead, the report claimed, the military—concerned with keeping its enlistment numbers to maintain the troops needed to serve in our wars in Iraq and Afghanistan—began to turn a blind eye toward the issue. It quoted Scott Barfield, an investigator at the Department of Defense, who claimed that he had identified and provided evidence on 320 extremists stationed at just a single base—Fort Lewis in Washington State, where, following the 1996 scandal, some 19,000 soldiers had been strip-searched and inspected for tattoos—but only two had been removed.

“Recruiters are knowingly allowing neo-Nazis and white supremacists to join the armed forces, and commanders don’t remove them from the military even after we positively identify them as extremists or gang members,” Barfield told the SPLC.

According to Potok, the Pentagon repeatedly refused to acknowledge the SPLC’s research and warnings. Potok says the group presented bound volumes of evidence showing specific people’s profiles on social media sites like newsaxon.org, and got 40 congressmen to join them in an appeal to the Pentagon.

“We were shot down each time,” Potok says. “The Pentagon essentially told us we were full of it. There was no problem.”

But in 2008, an unclassified FBI intelligence report, “White Supremacist Recruitment of Military Personnel since 9/11,” warned that white-supremacist leaders were encouraging sympathizers with no documented white supremacist history or tattoos to infiltrate the military as “ghost skins.” The report identified 203 people with military experience and affiliations with extremist groups.

In 2009, the Department of Defense quietly reworked its policy, clarifying what, specifically, was banned when it came to shows of support for extremist groups. Where it had previously prohibited “active participation,” phrasing which left a lot of room for interpretation on the part of commanders, it was re-written to say that active participation meant everything from recruitment to online postings.

“The bottom line here is that participation in extremist activities has never been tolerated and is punishable under the Uniformed Code of Military Justice,” said Lt. Col Tom Crosson, a Defense Department public affairs officer. “Simply said, extremism has always been incompatible with U.S. military values.”

Tom Tarantino, policy director for the advocacy group Iraq and Afghanistan Veterans of America, voiced concern that focusing on issues like these in a moment when thousands of service members are set to return from wars overseas will perpetuate negative stereotypes about veterans, making it more difficult for them to readjust to life at home.

“The civilian population doesn’t know us, but they think they do,” he told The Daily Beast, saying the disconnect between civilians and the military is the biggest it’s been since at least the period between the World Wars.

Though he admits that recruitment standards dropped for a period, he expressed disappointment at the 2009 DHS report, and thinks that in general, being in the armed forces leads to more open-mindedness, not less. “You leave your politics at the door because you’re there on a mission,” he says. “People who come out of the military have a much broader understanding.”

That may not be true for everybody. Tom Metzger, a white supremacist and former KKK “grand dragon,” told The Daily Beast that his views on race took seed during his time in the military in the late 1950s, where he says he first spent time with black Americans. Metzger says that while he used to recommend that his followers join the military to get trained in military operations, he stopped pushing that path as the casualty counts climbed in our wars in Iraq and Afghanistan.

According to the SPLC, extremist groups have grown at explosive rates in recent years, and today there are some 1,200 various militias operating domestically, up from just 150 four years ago. But Metzger says he’s pursuing the path of the “lone wolf,” advising his followers to grow out their shaved heads, and avoid tattoos or anything else that might indicate they belonged to an extremist group.

“We’re not waving flags, or running for office,” he says. “We’re just quietly digging in. It’s like a war. We’re behind enemy lines—you have to operate like a spy operates. And it works.”

Jesse Ellison is a staff writer and articles editor at Newsweek and The Daily Beast, covering social justice and women’s issues. A Front Page Award winner, she has discussed gender equality on CNN, WNYC, and at Princeton University. Find her on Tumblr.