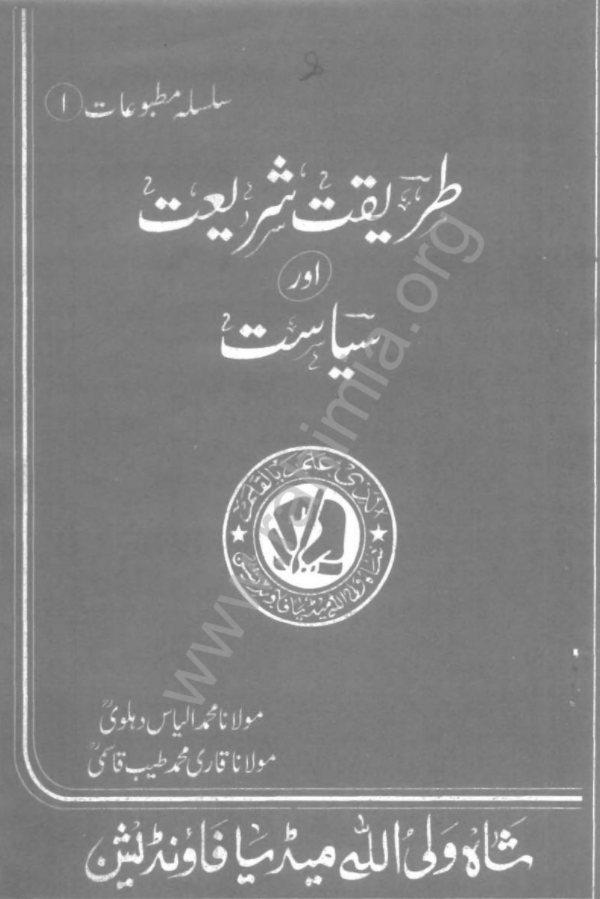 In The Name of Allah, The Most Merciful, The Especially Merciful

Given much confusion and compartmentalisation when it comes to the religious outlook and engagement of Muslims today, this text is essential reading from an influential, highly regarded and deeply learned scholar of South Indian Islam. The text provides a detailed yet concise explanation as to why the three strands of Islam: the spiritual way, the religious code and politics (tariqat, shariat and siyasat) must be interwoven to create a balanced, holistic, yet deeply reflective community — one that genuinely treads the path of the Prophet (peace be upon him). It is precisely the absence of all three in concert that the Muslim Ummah finds itself in the situation it is in today.

Following the tradition of seeking consultation (mashwera) from religious leaders, we find the founder of the Tablighi Jama’at movement, Maulana Muhammed Ilyas Khandhlawi seeking guidance from Maulana Qari Muhammad Tayyib Qasim (Principal of Darul uloom Deoband for over fifty years and the grandson of the founder of the Darul uloom, Maulana Muhammad Qasim Nanotwi) as to how the movement should continue with its success whilst ensuring that it does not lose sight of what religious calling (dawat) should entail.

The original document, which is well worth reading. A summary of some of the key points are below. [1]

The Qur’an presents the following verse:

“He it is Who hath sent among the unlettered ones a messenger of their own, to recite unto them His revelations and to make them grow, and to teach them the Scripture and wisdom, though heretofore they were indeed in error manifest” (Surah Jumuah, verse two).

The verse presents three ‘programs’ that ought to be combined in order for the Muslim Ummah to set itself on the course to reformation and revival:

In customary language the three programs are termed shariat, tariqah and siyasat respectively. They can be analogous to setting out on a journey. The shariat being its path, the tariqah being the provision, and siyasat being that which removes any dangers or obstruction. What is clear is that all three are required if one is to reach their destination safely.

Furthermore, the tariqah on its owns leads to a contemplative outlook and preference for seclusion. Siyasat however, is outward facing: one of engagement with wider society and being this-wordly. The juxtaposition of these apparently contradictory outlooks are reconciled by the shariat, which acts as a bridge. Again, the point is that all three are required. Following only the tariqah leads to weakness and cowardice. Being purely shariah oriented leads to constriction and a lack of pragmatism in religion. Finally, being solely immersed in siyasat leads to deception and pride. From this, one can diagnose a number of problems in our Ummah.

It is an affliction of our times that all of these three efforts have become compartmentalised and isolated from one another. In fact, the effect of this separation is that each group(s) actively seeks to compete and outwit one another. As a consequence, Islam is ultimately at loss.

For Maulana Qari Muhammad Tayyib Qasmi, this is precisely the cause of the decline of the Muslims. For him, the current predicament of Muslims is very much their own doing.

And only Allah knows best.

[1] Maulana Qari Muhammad Tayyib Qasim is not responding directly here but the response he has provided seems to fit in with the question posed by Maulana Muhammed Ilyas Khandlawi. See page 6 of the document.

I also want to thank Sheikh Saleem Seedat and Sheikh Uwais Namazi for bringing this enlightening document to my attention.