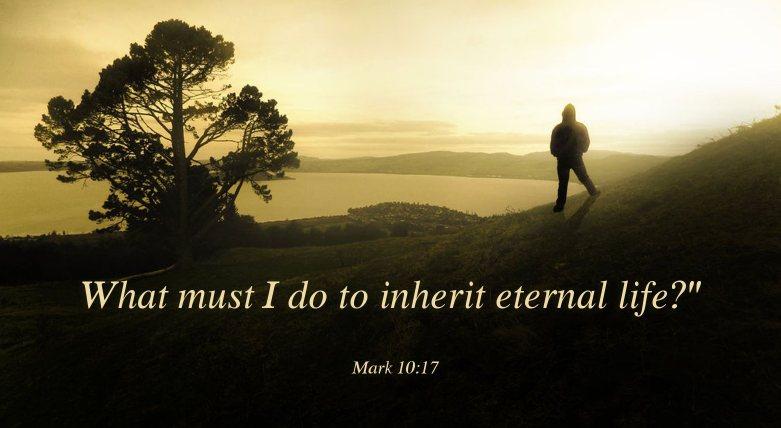 I want to tell you the story of the day that Jesus denied that he was God and the subsequent cover-up.

Now, this is not some kind of Da Vinci Code, Dan Brown conspiracy theory. Oh no!

This is based on really solid scholarship. So what is this story? Well it’s found in Mark chapter 10, Mark being our earliest gospel.

The other gospel writers Matthew and Luke used Mark in the writing of their gospel, they amended it and added to it and so on as they saw fit.

And our guide to the passage will be a chap called William Barclay. William Barclay wrote this commentary on the gospel of Mark and he was amongst other things an author, a radio and television presenter, Church of Scotland minister, and most importantly for our purposes Professor of Divinity and Biblical Criticism at the University of Glasgow, and he wrote this popular set of bible commentaries on the New Testament which has sold over one and a half million copies.

Now his motto if you like was : “making the best biblical scholarship available to the average reader” so that’s why he wrote these 17 commentaries on the New Testament published by Saint Andrews Press and they’re still very popular today.

You can buy them in Christian bookshops and other places, he’s very readable actually and very accessible for the layman. So there’s a story in Mark chapter 10 verse 17 I want to tell you, what he says about it and then we’ll come to the cover-up.

So the story in the gospel goes :

as Jesus was going along the road a man came running to him threw himself at his feet and asked him “good teacher what am I to do to inherit eternal life?”
Jesus said to him: “why do you call me good ?
There is no one who is good except one, God.”

here is one of the most vivid stories in the gospels. We must note how the man came and how Jesus met him, he came running, he flung himself at Jesus’s feet. There was something amazing in the sight of this rich young aristocrat, falling at the feet of the penniless prophet from Nazareth, who was on the way to being an outlaw. good teacher he began and straight away Jesus answered back. No flattery, don’t call me good. Keep that word for god. It almost looks as if Jesus was trying to pour cold water on that young enthusiasm. There is a lesson here. It is clear that this man came to Jesus in a moment of overflowing emotion.

It is also clear that Jesus exercised a personal fascination over him. Jesus did two things that every evangelist and every preacher and every teacher ought to remember and to copy. First, he said in effect – stop and thinkm don’t get carried away by your excitement. I don’t want you swept to me by a moment of emotion – think calmly what you are doing. Jesus is not cold-shouldering the man – he was telling him, even at the very outset to count the cost.

Second, he said in effect you cannot become a Christian by devotion to me, you must look at God.

Second, he said in effect you cannot become a Christian by devotion to me you must look at God. Preaching and teaching always mean the conveying of truth through personality and thereby lies the greatest danger of the greatest teachers.

The danger is that the pupil, the scholar, the young person may form a personal attachment to the teacher or preacher and think that it is an attachment to god. Teachers and preachers must never point to themselves they must always point to god. There is in all true teaching a certain self-obliteration. True we cannot keep personality and warm personal loyalty out of it altogether and we would not if we could but the matter must not stop there .

Teachers and preachers are in the last analysis only pointers to God,

So that’s very interesting. Jesus is clearly denying that he is God in this passage and as a good teacher as a good preacher he’s pointing away from himself to true goodness, The absolute source of goodness which is God himself. So what happens now?

What happens now is we find in the later gospels who you remember use Mark, Matthew and Luke use Mark in the writing of their gospels and they change, alter embellish, edit, add, subtract as they see fit with great freedom to do what they wish and when we come to Matthew’s gospel we find according to Professor Jimmy Dunn who is a very distinguished New Testament scholar at the University of Durham in his book Unity and Diversity in the New Testament, an Inquiry into the Character of Earliest Christianity. This is a heavyweight academic work at least late undergraduate or postgraduate level and he says on page 79

We must note also how some sayings of Jesus have been deliberately altered in the course of transmission.Altered in such a way as to give a clearly different sense from the original for example the opening interchange between the rich young man and Jesus

“good teacher what must i do to inherit eternal life. why do you call me good no one is good except God alone”,

in Matthew’s version chapter 19 verse 16 reads as follows “What good deed must i do to have eternal life? Why do you ask me about what is good only, one is good.”

So the words have been changed:

So what’s going on here?

Why has Matthew changed the words of Mark?

Jimmy Dunn says elsewhere and other scholars have said the same:

to avoid the embarrassment of Jesus denial of his divinity in Mark. This is an embarrassing saying in Mark. It leads to the inevitable conclusion (as Barclay says) that Jesus is pointing away from himself to God, God being a separate being.

Some early Christians didn’t want that to be the conclusion that we naturally reach. So they altered Jesus’s words to make them more fitting for Christian belief towards the end of the first century and in this passage, Jimmy Dunn gives lots of other examples, of how the teaching of Jesus has been changed and we can actually witness this. It is not speculation, this is not a liberal scholarship, you can by comparing the different passages you can see how they’ve been altered and what the agenda, Jesus teaching has been changed, whether it be on divorce. If you look at mark’s teaching, mark has Jesus teaching one thing on divorce and Matthew adds and amends it in his gospel. Luke does the same on other questions to do with the resurrection appearances and so on, I won’t go into all that at the moment.

This is quite shocking and this is totally mainstream scholarship – it’s one of the things that rocks your faith when you go to university and you study this I was there as an undergraduate and I saw it happening.  You can really as a Christian impact you quite negatively – you think well what’s this ? this shouldn’t be happening anyway ? so i thought i’d share that with you. Until next time