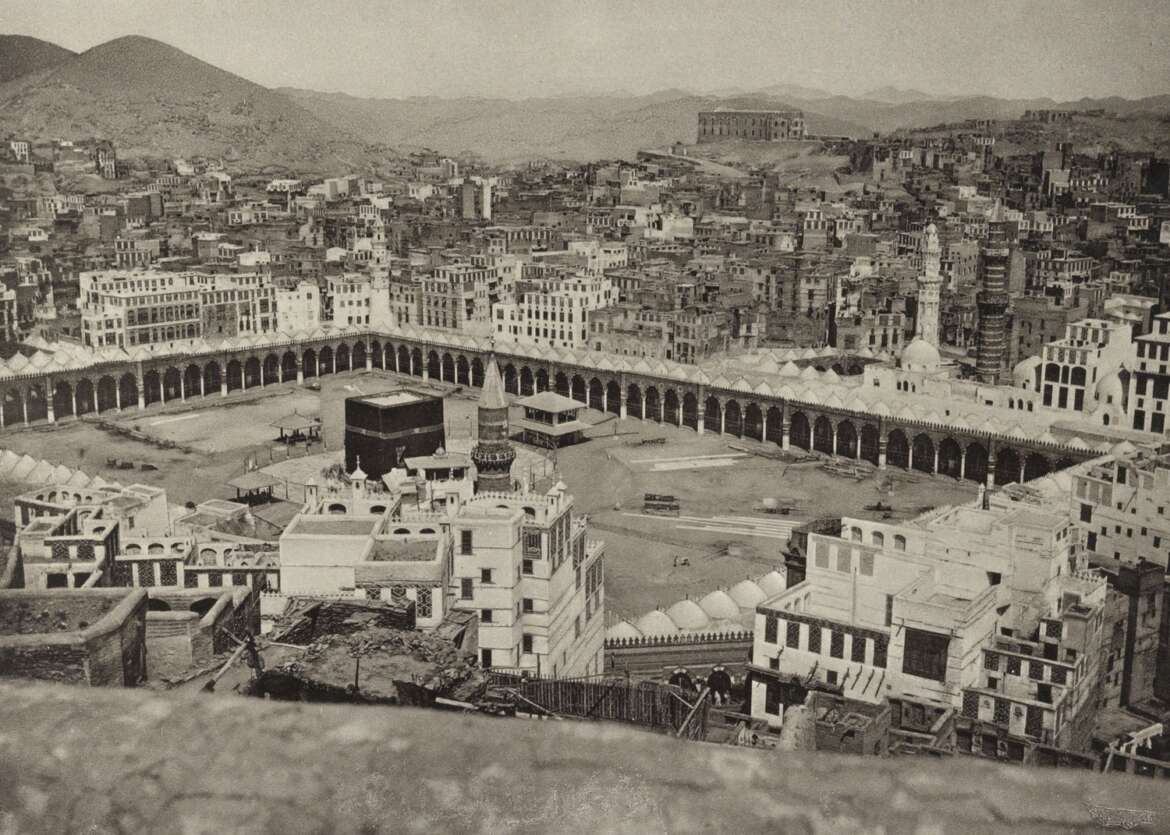 [The Prophet] the Blessing and Peace of God be upon him said,”God most High has promised this House that six hundred thousand [persons] will make a pilgrimage to it every year; and if [the pilgrims] are short [of that number] God most High will complete [their number] with the angels. And [he has promised] that the Ka’ba will be crowded about, like a bride in procession, while all the pilgrims cling to Its curtains and run about It until It enters Paradise and they along with it.” And in [another] traditions “The Black Stone is one of the jewels of Pa radise; it will be raised on the Day of Resurrection with eyes and with a tongue with which to speak, bearing witness on behalf of all” those who have kissed it in truth and sincerity.” and “[the Prophet]theBlessing and Peace of God be upon him used to kiss it frequently.” And it is reported that “He the Blessing and Peace of God be upon him prostrated himself before it” and used to circumambulate [it riding] on a camel, and would touch it with a stick and then kiss the end of the stick.” ” ‘Umar may God be pleased with him [once] kissed it and then said, I know you are just a stone in which there is neither harm nor benefit. If I had not seen the Apostle of God the Blessing and Peace of God be upon him kiss you I would never have kissed you.” Then he wept until his sobbing raised, and he turned around and saw ‘Ali [Ibn Abu Talib] may God honour his countenance and be pleased with him and said, ‘O ‘Abu al-Hassan, here is the place: where tears should be shed and supplications granted. ‘Ali said, ‘0 commander of the Faithful, there is indeed both harm and benefit [in the Black stone]. ‘He said, `How?’ [Ali] said, ‘When God made a covenant with progeny [of ‘Adam], He recorded [it] for them in a book, then stuffed it into this rock so that it might stand as witness to the fulfillment [of the covenant] by the believer and the repudiation [of it] by the unbeliever!” It is said that this is the meaning of those words spoken by people upon kissing [the Black Stone]:”0 God, for the faith in You, the belief in Your Book and the fulfillment of Your covenant” [I perform this duty].

It is related on the authority of alHasanalBasarimayGod be pleased with him that one day of fasting in it [i.e.Makkah] is equal to a hundred thousand days of fasting [in other places], and one dirham given as alms [In Makkah] is equal to a hundred thousand dirhams [given elsewhere]; the same is true of every [other] good dead. And it is said that seven circumambulations [around the Ka’ba] is equal to one lesser Pilgrimage and that three Lesser Pilgrimages are equal to one Greater Pilgrimage. Thus in a sound tradition [we read] : ” One lesser Pilgrimage in [ the month of] Ramadan is equal to the Greater, Pilgrimage along with me.” And [the Prophet] the Blessing and Peace of God be upon him said,”I am the first over whom the earth will be split, then I come to the people of Baqi’ so that they will be assembled along with me [on the Day of Resurrection], then I come to the people of Makkah to be resurrected between the two Sanctuaries (haramayn).” And in [another] tradition [he declares]: “Verily, ‘Adam the Blessing and Peace of God be upon him was once met by angels after performing his rites, and they said to him,‘Your pilgrimage is accepted, 0 ‘Adam. Verily we made the Pilgrimage to this house two thousand years before you.”Moreover, the following is found in the tradition: “Verily God Most High looks upon the people of the earth each night. The first of those upon whom He looks are the people of the Sanctuary (harem), and the first of the people of the Sanctuary upon whom He looks are the people in the Sacred Mosque (alMasjid, alHarem).Those whom He sees performing the circumambulation He forgives; those whom He sees praying He forgives; and those whom He sees standing with their faces toward the Ka’ba He forgives. “One of the friends [of God]may God be pleased with them to whom the mysteries had been revealed said, “I saw all the harbours prostrate themselves before ‘Abadan, and I saw ‘Abadan prostrate itself before Jadda.” And it is said that the sun will not set on any day until one of the ‘Abdal has performed the circumambulation and that the dawn will not break forth after any night until one of the ‘Awtad has performed it; if this [daily routine] were to come to a stop, it would cause [the Ka’ba] to be removed from the earth, so that people would awaken [to find that] the Ka’ba had vanished and would find not a trace of it. The same [would also happen] if seven years were to pass without anyone having performed the Pilgrimage, moreover, the Qur’an would be removed from its pages [masahif], and people would arise and, so, the paper would be white and glittering without a single letter on it; then the Qur’an would be erased from hearts and not a word of it would be re membered; and the people would return to the poetry, songs, and tales of the pre-Islamic period; then Anti Christ would go forth and Jesus upon whom be Peace would descend to kill him. The hour when all this occurs would be like the pregnant woman in travail, waiting for the mo ment of her delivery. [it is said] in the traditions “Circumambulate this House frequently before it is removed, for it has been destroyed on two occasions and on the third occasion will be removed.” And it is related on the authority of ‘Ali may God be pleased with him that the Prophet the Blessing and Peace of God be upon him said,”God Most High said, ‘If I intend to destroy the world I would begin with My House: [first] I would destroy It and then I would destroy the world after It.”

1.  The more cautious and circumspect of scholars consider residing at Makkah to be reprehensible for three reasons: 1. First, it is feared that one will become bored with and, [unduly] accustomed to the House, with the result that the burning reverence of the Heart [for it] would be tempered. Thus ‘Umar may God be pleased with him used to strike pilgrims who had completed the Pilgrimage, saying, ‘0 people of al-Yaman, to al-Yaman with you! 0 people of Syria, to Syria with you! 0 people of ‘Iraq, to ‘Iraq with you!” For this reason also ‘Umar may God be pleased with him forbade excessive circumambulations, saying, “I fear that people will take this House for granted.”

2. Secondly, separation [from Makkah] arouses longing, inciting the motive to return; for God has made the House a resort for mankind and a place of security, that is to say, they may be take themselves to it from time to time, but with outgaining their end. One [of the learned men] said, “It is better to be in a [far] country with your heart longing for Makah and fixed upon this House than to be in [Makkah] and [find] yourself tired of remaining there and your heart in another country.” One of the Fathers (Salaf) said, “Many of man in Khorasan is nearer to this House than he who circumambulates it.” It is said that God has some worshippers around whom the Ka’ba circumambulates in order to draw near to God Most High.

3. Thirdly, it is feared that one might commit errors and sins while there. This is indeed a grave end and, in view of the dignity of the place, is fit to bring on the wrath of God. Wuhayb Ibn aWard al-Makkiis reported to have said, “It happened one night when I was praying in al-Hijr that I heard a voice from between the Ka’ba and the curtain saying, To God and to you, 0 Gabriel, I complain of that which I suffer from those who circumambulate around me, [namely] their engrossment in talk, their babble, and their sport. If they do not desist I will quake till every stone of mine return to the mountain from which it was hewn.”

Ibn Mas’ud may God be pleased with him said that there was not a town in which one was castigated for the [mere] intention [to do wrong] prior to the actual committing [to wrong] except Makkah, and he recited the words of [God]Almighty; “And who seeks wrongfully to deviate therein [from the right path] we shall cause him to taste of a grievous punishment” ( 22:26 ). [Furthermore] it is said that bad deeds are [in Makkah] just as good deeds are doubled. ‘Ibn ‘Abbas may God be pleased with him used to say, “In Makkah [mere] hoarding is, within the Sanctuary, an act of apostasy.” The same is also said of lying. Ibn ‘Abbas also said, “To commit seventy offenses at Rukba is to me preferable to committing a single offense in Makkah.” Rukba is a reststopbetween Makkah and Ta’if. Out of fear of this [consi deration], some residents [of Makkah] have gone so far as to refrain from relieving themselves within the Sanctuary, and instead to retire to alHill to take care of their needs. One of them remained a month without laying down his rib on the ground. In order to bar people from remaining [in Makkah], some scholars have deemed the renting of Makkahn houses reprehensible.

Do not suppose that the reprehensibility of remaining [in Makkah] contradicts the excellence of the place, the cause of this reprehensibility is the weakness of the creatures and their inability to give the place its full due. Our statement “it is better to avoid remaining [in Makkah] means that [such is better] in relation to remaining [in Makkah] in [a condition of] negligence and boredom. As for [ the notion that] it is better than remaining [in Makkah] while giving [the place] its full due, this it far from the truth. How could it be otherwise, considering that the Apostle of God the Blessing and Peace of God be upon him upon returning to Makkah faced the Ka’ba and said, “Thou art the best [part] of the earth of God Most High and art to me the most beloved of God Al mighty’s Lands. Had I not been driven from thee, I would not have left thee.” How indeed would the matter be otherwise, when [merely] to gaze at the House is worship, and good deeds [performed] in it are counted as double, as we, have already noted.