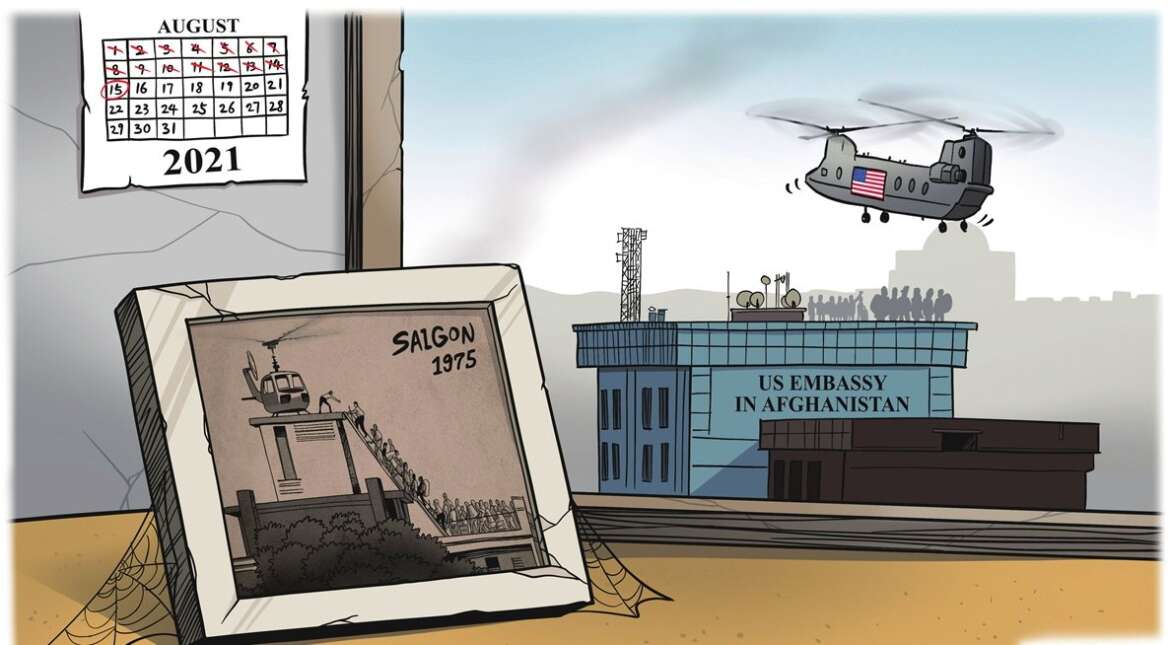 “Washington’s focus on Afghanistan … has had very little to do with establishing a better and more equitable society for the Afghans. The ostensible impulse … was nominally to destroy the presence of al-Qaeda in Afghanistan… The deeper and more profound reason … was more pointedly to establish a military and geopolitical foothold in central Asia on the very borders of Russia and China… The ‘nation-building and humanitarian’ aspects of the American occupation were largely window dressing to cover Washington’s geopolitical ambitions.”

Biden has very few options to restore US global credibility and counter the rise of the Eurasian power bloc. And all of them are bad

The tragic epilogue in Afghanistan came as no surprise to those few analysts who knew the real dynamics of the conflict but were often ignored, or ridiculed. Following the fall of Kabul into the hands of the Taliban, there were a plethora of post-mortems as to what went so wrong. The just-released, highly informative report of the US Special Inspector General for Afghanistan Reconstruction provides a clear picture. Sadly, America’s political and military establishments remain impervious to learning basic lessons.

The best the US administration could do for itself, and the rest of the world, is to take a sabbatical for a decade from policing the planet

The US is leaving in chaos, with the 20th anniversary of 9/11 approaching, thus ending the cycle of imperial overreach which became the so-called “war on terror”; a cycle which one of the leading scholars of the region, Professor Fawaz Gerges, called “the greatest strategic disaster in the United States’ modern history”. Some commentators are legitimately asking if the Taliban victory marks the beginning of the end of the western empire.

The war on terror spawned more terrorists than it eliminated. Ultimately, it was a trap that Osama bin Laden designed, and which the US walked into. It took 20 years to climb out of it, double the time it took the notoriously clumsy Soviets.

Chapter draws to a close

However, another chapter is drawing to a close, and with it another US defeat: the “Great Game” in Central Asia.

As a veteran US intelligence operative pointed out: “Washington’s focus on Afghanistan … has had very little to do with establishing a better and more equitable society for the Afghans. The ostensible impulse … was nominally to destroy the presence of al-Qaeda in Afghanistan… The deeper and more profound reason … was more pointedly to establish a military and geopolitical foothold in central Asia on the very borders of Russia and China… The ‘nation-building and humanitarian’ aspects of the American occupation were largely window dressing to cover Washington’s geopolitical ambitions.”

The US great game in Afghanistan was preventing the rise of a Eurasia power bloc – the key, as the father of geopolitics Halford Mackinder theorised a century ago, to continue controlling the world. In 21st-century terms, it means stopping China and its ambitious Belt and Road Initiative (BRI), which symbolises the shifting of world power, and disrupting the increasing cooperation between China, Russia and Iran.

It is not coincidental that Iran is also to formally enter the Shanghai Cooperation Organisation (SCO), the political format that will set the Eurasian agenda, a big event that has gone almost totally unnoticed by the western media. While the G7, through which British Prime Minister Boris Johnson has been pressurising US President Joe Biden to put back the timetable for withdrawal from Afghanistan, has appeared totally inadequate to deal with the unfolding crisis.

So, is the US also about to end another cycle: the “Forty Years War”, fought against Iran and its allies in the Middle East. Or, in more evocative terms, what will be the endgame between the Abraham Accords’ signatories and the “Axis of Resistance”?

What will the Biden administration do regarding Iraq, Syria, Lebanon, Yemen and the Israeli-Palestinian conflict? Much will depend on the likelihood of returning to the nuclear deal with Iran, the JCPOA, or an agreement that also includes a basic security framework for the region.

Irrespective of attempts by Israel and its supporters to prevent this from happening, the chances of coming to a deal with Iran are slim. The problem lies in the fundamentals.

Having been let down both by former US President Barack Obama, who signed but did not honour the nuclear deal, and by Trump, who walked away from it, Iran, not unnaturally, is asking Biden for guarantees.

Tehran does not believe that Biden, whatever he signs, will comply or be allowed to comply with the terms of the deal. Any fair understanding will require sanctions to be lifted. Even Biden’s more talented negotiators agree that there can be no guarantee of getting the lifting of sanctions through Congress. While that doubt is in place, Iran will not sign.

Tehran does not believe that Biden, whatever he signs, will comply or be allowed to comply with the terms of the deal

In addition, US insistence that any security framework in the region should prioritise the termination of Iran’s ballistic missile programme and the end of its “malign activities” in the region is also a non-starter.

No Iranian leader will voluntarily surrender Iran’s security policies. The refusal to do this is sustained by Israel’s bombing of its allies, attacks on its nuclear plants, the uninterrupted flow of US weapons to Iran’s neighbours and its interventions around the Middle East.

It is a situation – which brilliant analyst Alastair Crooke has defined as a seismic geopolitical shift – where Biden has relatively few options left. And all of them are bad.

First option could see Biden mobilising Europe against China and the BRI, as it is already attempting to do, but this would reignite transatlantic tensions. Europe is already highly dismayed by US behaviour in Afghanistan, and it does not wish to lose precious trade with China during a tough post-Covid 19 recovery. Above all, Europe cannot decouple its economy from China’s and sever its supply chains from Beijing (neither can the US).

Secondly, Biden could set the Middle East ablaze again, starting a new war against Iran, and creating a huge southern soft belly to the BRI. This would not be the best way to promote his foreign policy for a hurting American “middle-class” – just after exiting from an unpopular two-decade war in Iran’s eastern neighbour. This option would gift an “America is back” narrative to Donald Trump if he decided to run for president in 2024.

And the last option is for the US to take a sabbatical – for a decade – from its role as global hegemon, based on “liberal interventionism and democracy and human rights promotion”, and instead dedicate all resources to “nation-building” within the US, which is badly needed.

Biden is being blamed for the withdrawal from Afghanistan, which was negotiated by Trump. This is like blaming Gerald Ford for the Vietnam War.

Biden is unlucky to be holding the can for his predecessors’ gross miscalculations. He can, however, be fairly accused of having failed utterly to plan for this event, and for the sheer lack of empathy he has shown for the Afghans flocking to the airport and for the fate of thousands of Americans still in the country.

The US military and security establishments continue to live in a bubble detached from reality. Just a few weeks ago, Biden claimed there was no risk of an Afghan military collapse. The blame game in Washington has only just started.

Of the four bad options listed above, the best this administration could do for itself, and the rest of the world, is to take a sabbatical for a decade from policing the planet.

It is the only way of restoring the US’s credibility and to return as a leader without hubris and arrogance. Those who encouraged the withdrawal from the nuclear deal with Iran are now shouting that no one will believe America after Afghanistan. The project of revising America’s dangerous sense of itself and its own exceptionalism, its belief in the US role in the world as fundamentally benign and Pax Americana being a universal good, has never been more urgent.

Biden, of course, will plough on along another cul-de-sac. In the autumn he aims to convene a summit of democracies. This will ascribe global insecurity to rising authoritarianism, which is the word America now uses for anyone who resists American hegemony. However, Biden may find recruitment for a new coalition to be more complicated, even among the US’s most devoted allies.

Marco Carnelos
Marco Carnelos is a former Italian diplomat. He has been assigned to Somalia, Australia and the United Nations. He has served in the foreign policy staff of three Italian prime ministers between 1995 and 2011. More recently he has been Middle East Peace Process Coordinator Special Envoy for Syria for the Italian government and, until November 2017, ambassador of Italy to Iraq.
Share
Facebook Twitter Pinterest Linkedin