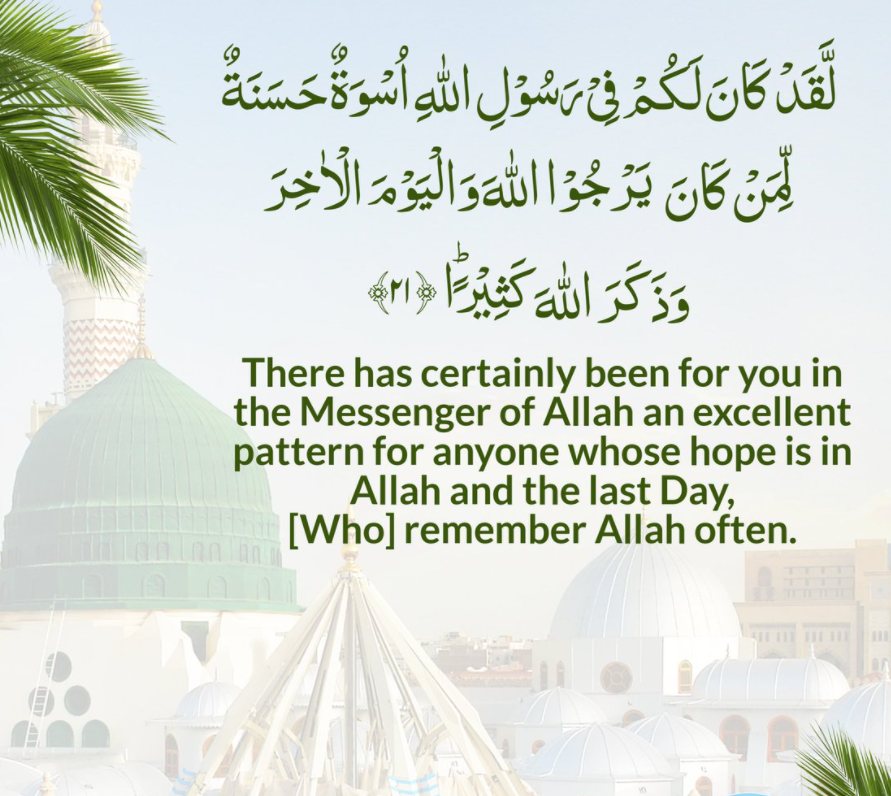 “There is indeed a good model for you in the Messenger of Allah – for the one who has hope in Allah and the Last Day, and remembers Allah profusely.”

My honourable elders and dear brothers,

Seeing that the month of Rabi’ al-Awwal has commenced, I would like to discuss a few matters in relation to it. May Allah Most High make it beneficial for us all, Ameen.

Rabi’ al-Awwal is an extremely blessed month in view of the fact that the master of both worlds (Allah bless him & give him peace) was born in it, and that Allah Most High chose this month to bestow upon the whole of humanity His great favour and sent His Messenger to the world in it. Given this, it would be correct to say that had there been a concept in Islam of celebrating birthdays, no other day would have been more worthy for this than the birthday of the Messenger of Allah (Allah bless him & give him peace). The reason for this is that Allah Most High, in this day, granted the whole of mankind a means of guidance in order to guide humanity till the end of time.

Their vision was set on the reality that the Messenger of Allah (Allah bless him & give him peace) has come with an immense message for the whole of humanity and that [true] love and respect for him necessitates acting upon his teachings.  As such, the Companions never celebrated particular days with lights and decorations, but their hearts were illuminated with candles of love for Allah’s Messenger (peace and blessings be upon him); there was a constant yearning in their hearts to act upon his ways and teachings, and mould their lives in accordance with it. Every moment of their life was spent in explaining, teaching and implementing the Sirah and Sunnah of Allah’s Messenger (peace and blessings be upon him), and they wholeheartedly embraced his teachings. As a result, Allah Most High granted them success, honour and respect the world over to the point that great superpowers like Qaysar and Kisra succumbed before their supremacy.

In the month of Rabi’ al-Awwal, we organize gatherings, events and conferences to remember the blessed Sirah of Allah’s Messenger (peace and blessings be upon him), but I ask all of you and myself the following question: After attending any one of these events, do we begin acting upon a Sunnah that we were not acting upon prior to attending the event? Do we see a change in our lives? How many sins and mistakes do we repent from and stop committing after the passing of Rabi’ al-Awwal and listening to the Sirah? How many obligatory (fard) and necessary (wajib) acts we start implementing that we were not acting upon before?

When we ask these questions sincerely to ourselves, the likelihood is that the response will not be that positive. There is no real change of direction in our lives; the sins we were committing before Rabi’ al-Awwal, we continue to do them after it; if we were involved [for example] in bribery, we continue to remain involved in it; if we were usurping the rights of others, we continue in doing so; if we were negligent in offering prayers with congregation, we remain negligent; if we were deprived from Sunnah acts – whether they relate to worship, monetary transactions, social dealings, or character traits – we remain deprived.

Despite organizing such big events, conferences and celebrations [in Rabi’ al-Awwal], this attitude [outlined above] has resulted in us being degraded throughout the world. The attitude of the Companions (Allah be pleased with them) was such that they would leap at any given opportunity to act upon even the minute of Sunnah, and would not care if others disapproved.

On the occasion of the Al-Hudaybiyya treaty, the Messenger of Allah (peace and blessings be upon him) sent Sayyiduna Uthman ibn Affan (may Allah be pleased with him) – whom the Messenger of Allah (peace and blessings be upon him) described as ‘complete in modesty and faith’ –for negotiations with the leaders of the polytheists (mushrikun) and disbelievers of Makka. When he went, he initially camped at the house of his cousin. As they were departing for the negotiations, his cousin saw that Sayyiduna Uthman’s (Allah be pleased with him) lower garment was very much above his ankles and halfway up his shin. Wearing one’s lower garment above the ankles was greatly despised and considered demeaning amongst the Arabs of that time; in fact, they would pride themselves in wearing their lower garment below their ankles and dragging it on the ground. An Arab poet says, “When I depart in the morning after having consumed four rounds of alcohol, my lower garment makes lines on the ground.” Thus, Sayyiduna Uthman’s cousin suggested that he lower his garment for just one day because these Arabs will look down upon him and not give importance to what he has to say.

Upon hearing this, Sayyiduna Uthman (Allah be pleased with him) responded in one short sentence, saying, “Never; this is how our master (peace and blessings be upon him) wears his lower garment.” In other words, whether they think good or bad of me, respect me or look down upon me, I am not prepared to leave his Sunnah.

A poet once said,

“As long as you fear being mocked, you will always be laughed at.”

Meaning, as long as you fear being ridiculed in acting upon the Sunnah, you will constantly be ridiculed. However, if you create love and admiration for the Sunnah in your hearts, implement it in your lives, and pay no heed to people’s ridicule, a time will come that you will laugh at them. The Qur’an says,

“So, today those who believed will laugh at the disbelievers. While [sitting] on thrones, they will be seeing whether the disbelievers have been paid back for what they used to do.”

Therefore, if you have love and admiration for the Sunnah, you will not be bothered by people’s ridicule and mockery. The day we create this attitude in ourselves, we will In sha Allah earn respect throughout the world.

Nevertheless, every year during the month of Rabi’ al-Awal, gatherings, events and conferences are organized, but we do not see any change in our practical day-to-day lives. This is an extremely tragic situation, and a cause of concern for us all. If – due to this month of Rabi’ al-Awwal and the Sirah events organized therein – with the Tawfiq of Allah we firstly create love and admiration for the Sunnah and teachings of Allah’s Messenger (peace and blessings be upon him), and not merely make lip service that we love him. We indeed claim verbally to have love for him, but if we do not have love and admiration for his Sunnah, his message and his teachings, then our claim would be false. If we are true in our claim of loving him, then we would also love and admire his Sunnah and teachings, and as a result implement these teachings into our lives.

With genuine love and admiration, every trait of the beloved also becomes beloved, and one does not question it. Today, whenever a ruling of Shari’a or teaching of Allah’s Messenger is mentioned, we begin to question it, saying things like: “why is such-and-such unlawful?”and “why is such-and-such obligatory?” If one has genuine love for someone, then one does not question any trait or act associated with the beloved; rather, one adopts the attitude that if my beloved is doing it then I will also do it. As such, I fear that our claims of loving the Messenger of Allah (peace and blessings be upon him) – Allah forbid – may well be false, since if we are not adopting his teachings and Sunnah, such claims would seem fake.

In the verse of the Qur’an I recited at the beginning, Allah Most High says,

“There is indeed a good model for you in the Messenger of Allah – for the one who has hope in Allah and the Last Day, and remembers Allah profusely.” (Qur’an 33:21)

Therefore, in this month of Rabi’ al-Awwal – in which the Messenger of Allah (peace and blessings be upon him) came into this world – we should at least make a resolution to increase in following the Sunnah, and an earnest effort of bringing into our lives those Sunnah acts that we had not been acting upon until now.

These Sunnah practices are extremely pleasant and result in this life as well as the next life becoming joyful. Some of these are very easy to execute, and do not require any great effort, time or money. They are abandoned merely out of carelessness. For example, when entering the Mosque, there is no difficulty in entering with one’s right foot, and by doing so one will be acting upon one Sunnah. Similarly, when exiting the Mosque, there is no hardship in departing with the left foot and reciting the du’a  اَللّٰهُمَّ اِنِّيْ اَسْئَلُكَ مِنْ فَضْلِكَ     ‘Allahumma inni as’aluka min fadlik’ ( O Allah: I beseech You to grant me from the best of. Your favours)

Likewise, there is no difficulty in eating with one’s right hand and uttering the name of Allah before commencement and reciting the du’a after completing the food. However, we remain deprived of these Sunnah acts due to carelessness and negligence. Likewise, it is a Sunnah of the Messenger of Allah (Allah bless him & give him peace) to meet others with a pleasant face; so act upon this Sunnah with the intention of acting upon the Sunnah [and not merely a mundane worldly act].

It is imperative to first learn about all these Sunnah practices. My Shaykh, Dr Abdul-Hayy Arifi (Allah have mercy on him) has authored a book titled ‘Uswa’ Rasul Akram’ in which he has gathered Sunnah practices from morning to evening, as well as those relating to different walks of life. For example, how to deal with one’s children, parents, and spouse, how to conduct one’s business, and so-on-and-so-forth. It is a relatively short work, comprising a few hundred pages. Acquire this book, study a portion of it every day and learn about the teachings and Sunnah of Allah’s Messenger (peace and blessings be upon him), and then one-by-one try adopting these Sunnah acts in to your life.

If we do that, then this month of Rabi’ al-Awwal will be a blessed month and highly beneficial for us. On the other hand, if we suffice on festive celebrations and events, then I feel there is no greater injustice perpetrated towards the Messenger of Allah (peace and blessings be upon him). May Allah Most High – out of His favour and mercy – grant us all the ability to follow the Sunnah in its entirety, and illuminate our lives with the light of Sunnah, Ameen. And the last of our prayers is that all praise belongs to Allah, the Lord of the worlds.

article title :  The Month of Rabi’ al-Awwal & True Love for the Sunnah