You Are Here » Home » Other Knowledge » The Nation of Islam : Comparison Between Islam and Farrakhanism

by The Institute of Islamic Information and Education

ISLAM, and so-called “NATION OF ISLAM” are two complete different religions. The Only thing common between them is the jargon, the language used by the both. “The nation of Islam” is a misnomer; this religion should be called Farrakhanism, after the name of its propagator. The religion of Elijah Muhammad and W. D. Muhammad, integrated the community with the Muslim community at-large, following the Qur’an and Hadith of Prophet Muhammad (pbuh). Louis Farrakhan joined W.D. Muhammad and gave his pledge of allegiance to him after Elijah Mohammad’s death; he later rebelled and broke his oath with impunity, or without paying any expiation, and restarted “THE NATION OF ISLAM.”

Examine the following comparisons between Islam and Farrakhanism with regard to the belief or practice in each. 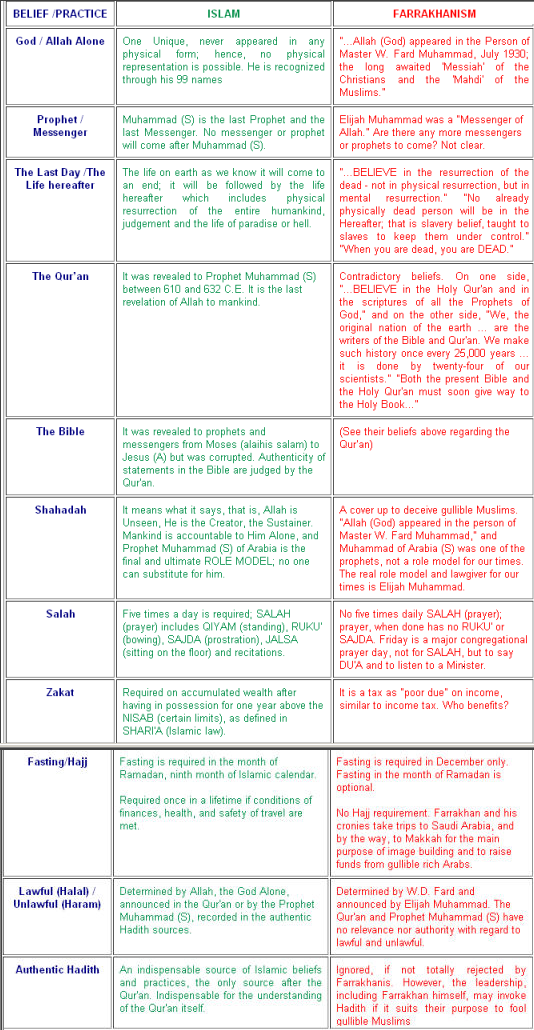 There are many groups in America who claim to represent Islam and call their adherents Muslims. Any serious student of Islam has a duty to investigate and find the true Islam. The only two authentic sources which bind every Muslim are, (1) the Qur’an and (2) authentic or sound Hadith. Sometimes, Fiqh is quoted as a source. However, only that part of fiqh is a true source and binding which quotes directly Qur’an and authentic Hadith. All other parts of fiqh are opinions of learned scholars. Since scholars are not prophets or messengers of Allah, they are fallible people. Hence their opinions may be correct or may not be correct; they do not become binding. Any teachings under the label of “Islam” which contradict or are at variance with the direct understanding of fundamental beliefs and practices of Islam from the Qur’an and authentic Hadith should be rejected, and such a religion should be considered a PSEUDO-ISLAMIC CULT. In America there are many pseudo-Islamic cults, Farrakhanism being one of them. An honest attitude on the part of such cults should be not to call themselves Muslims and their religion Islam. Such an example of honesty is Bahaism which is an off-shoot of Islam, but Bahais do not call themselves Muslims nor their religion, Islam. In fact, Bahaism is not Islam just as Farrakhanism is not Islam. The foundation of Islam consists of TAWHEED, RISALAH, and AAKHIRAH. And “five pillars” of Islam are SHAHADAH, SALAH, ZAKAH, SAWM and HAJJ. The rest of the building of Islam consists of SHARI’A which includes HARAM and HALAL, RIGHTS and DUTIES, MORAL CODE, CONVEYING THE MESSAGE, IMPLEMENTATION OF THE RULE OF ALLAH and EXCELLENCE in everything Muslims do. Any claims of Islam should be judged on the criteria given in this paragraph. If the foundation and pillars of a building are demolished there is no building left. Such is the case with pseudo-Islamic cults, including Farrakhanism. For details request the booklet, HOW TO PRESENT ISLAM, A RATIONAL APPROACH by the author of this brochure.