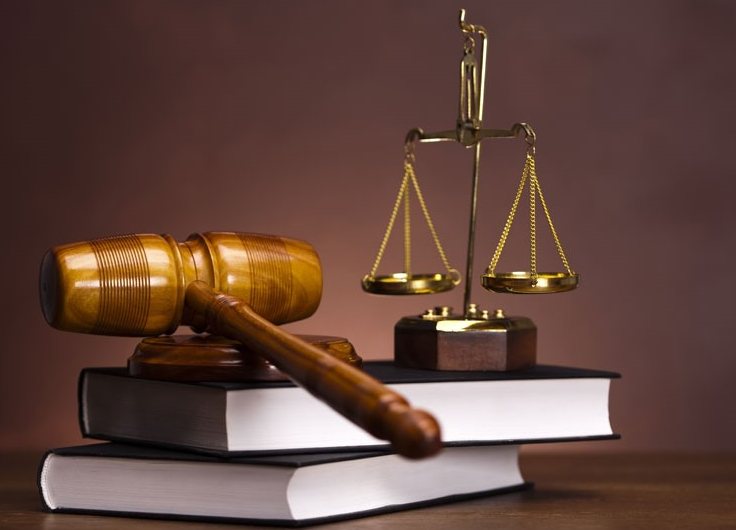 The study of Islamic law and jurisprudence in English brings with it some problems that need to be resolved before the subject is approached in earnest. These problems pertain to terminology and are imported into the Islamic disciplines from Western Jurisprudence simply by the use of Western terms. The term “Islamic Jurisprudence,” for example, cannot be assigned a clear meaning if the meaning of the term “Jurisprudence” itself is not clear in Western law. According to Dias, one of the most difficult problems of jurisprudence has been, and perhaps still is, to determine the exact meaning of “jurisprudence” as well as to determine its province and scope.1 This is so despite the fact that “jurisprudence was the first of the social sciences to be born.” 2 Explaining the problem of the meaning and scope of jurisprudence, Dias says:

Its province has been determined and re-determined because the nature of the subject is such that no delineation of its scope can be regarded as final. On torts and contracts, for example, a student may be recommended to read any of the standard textbooks with assurance that, whichever book he does read, he will derive much the same idea as to what the subject is about.

With jurisprudence this is not.so.  Books called “jurisprudence” vary so widely in subject matter and treatment that the answer to the question, what is “jurisprudence” ?, is that it means pretty much whatever anyone wants it to mean—a depressing start indeed.3

A possible reason, in our view, is that Western jurisprudence has not been developed systematically within one legal system; it has been subject to diverse influences from various legal systems in the Western world. While we use the terms Western law and Western legal system, there are different approaches to the law in different jurisdictions and even the word jurisprudence does not have the same meaning.

For Western law, the term “jurisprudence” was first used by the Roman jurists, but they never developed an independent subject called “jurisprudentia”.4 Since then its “province has been determined and re-determined,” as Dias says 5 In the last few decades, this activity has increased and the study of jurisprudence has changed radically.6 The result of this activity has influenced even the titles used to study the subject: “Jurisprudence,” “Legal Theory,” “Theories of Law,” “Legal Philosophy” and “General Theory of Law.”

The modern format for the study of jurisprudence—we feel and it will be obvious to whoever compares the two systems—is gradually heading towards the format that was developed by Muslim jurists for usul al-fiqh more than a thousand years ago. This, of course, is true for the general format and there are differences too that spring from the fundamental distinctions between the two legal systems. To understand the similarities and differences, we shall briefly examine the meanings of jurisprudence recorded by Roscoe Pound and then look at the format of the “general theory of law” provided by Ronald Dworkin.7

A Format of the General Theory of Law

Roscoe Pound identified three uses of the word jurisprudence.8 Two of these uses, he thought, were justified, while the third was wholly unjustifiable.9 The two relevant uses are as follows:

“In America the word “jurisprudence” has been used to some extent in the French sense. Thus the phrase “equity jurisprudence,” meaning the course of decision in AngloAmerican courts of equity, has been fixed in good usage by the classical work of judge Story.15

The second meaning throws some light on the nature of American jurisprudence with its emphasis on the nature of the judicial process and theories of adjudication. When the judge is faced with hard cases, the question arises as to where does he get his law from when the statutes or existing decisions do not help? This is where the theories of law, and the political philosophy of the judge, whether he has one or not, become relevant.

In Britain today, the study of analytical jurisprudence, as represented by Salmond’s book,16 has been given up completely. The emphasis now is entirely on legal theories. The true importance of the theories of law will not be realized, however, unless the emphasis shifts from the study of the concept of law to the nature of the judicial process.

The positivists have consistently maintained that the judge uses his “discretion” in hard cases, and this is where philosophers like Dworkin have opposed them. These philosophers maintain that the “discretion” of the judge is not uncontrolled and he is bound by a body of “general principles,” which are law as well, and he is also bound by a determined methodology. 17

In addition to the judge, the legislators exercise the power to grant and take away rights from the public. What guides them in determining these rights? What are the limits on the authority that they exercise? What are the sources of this authority and of the rights that they lay down in the law? The legislators too are bound, or should be bound, by some methodology. Their power is not absolute. Here too the theories of law become relevant.18

Jurisprudence today is, therefore, viewed as a general theory of law. What is the format of this theory? The best format for the study of jurisprudence has been provided by Ronald Dworkin as the “General Theory of Law” a title that is obviously influenced by the second meaning of jurisprudence given above. Dworkin describes the structure of a general theory of law, in his book, Taking Rights Seriously. This has been amended slightly and described below in Dworkin’s own words:20 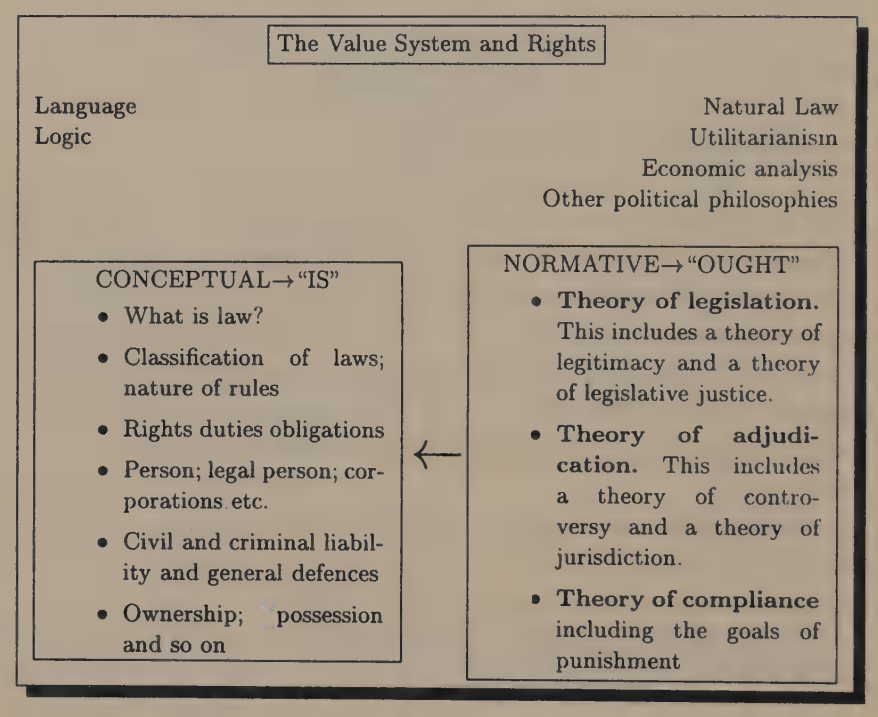 1. A general theory of law, says Dworkin, must be normative as well as conceptual.

7. The categories described above are not watertight compartments and a subject described in one may fall in another.22

8. A general theory of law will have many connections with other departments of philosophy. The normative. part of the general theory will be embedded in a more general political and moral philosophy which may in turn depend upon philosophical theories about human nature and morality.

9. The conceptual part will draw upon the philosophy of language and upon logic.

We are indebted to Dworkin for providing such a clear picture of the general theory of law, a picture that helps us elaborate the scope of usul al-fiqh as it has always existed in the past and as it should be viewed in the modern context.

To expand this general format, we may add that in the present century there has been a revival of natural law. This has led to what is called a value-oriented jurisprudence. Values are seen in the shape of interests that need to be secured by society.23 These are:

(2) sanctity of the person;

(6) consistency and fidelity to rules, principles, doctrine and tradition;

Each dispute or issue is seen as a clash between two or more interests and the decision involves preference of one interest over the other. This is achieved through the concept of justice prevailing in society.25 In other words, these values provide the highest general principles, which may also be considered a part of law. For Dworkin himself, the judge enforces some rights. These rights lie outside the ambit of the law, so to say. His ideas are to be viewed in the context of what is called “Dworkin’s Rights Thesis.” 26

article title : The Problem With the Meaning of Jurisprudence

6 In Pakistan, we still cling to the old method, perhaps, oblivious to the changes that are taking place in the rest of the legal world.

7 Ronald Dworkin is the leading legal philosopher in the Western world today.

10 As well as in the dominions we may add.

Holland uses the term in this sense when he defines Jurisprudence as the “formal science of positive law.” Holland, Jurisprudence (13th ed. 1924) 13, as quoted by Pound, Jurisprudence, 8. This definition proceeds on the Aristotelian distinction between substance and form. To give an old-time illustration, a smith has in his hand the raw material, the substance, steel and wood. He has in his mind the idea, that is, the picture of a saw. He fashions the substance to that mental picture and so gives to the substance the form of a saw. Hence the maxim forma dat esse rei. Accordingly, by saying that Jurisprudence | is a formal-science, Holland means that it has to do with systems of legal precepts but not with legal precepts, the substance given form in those systems. It does not criticise the content of a body of laws except for being out of line with the analytical system. It arranges and systematises that content. By “positive law” he means the body of legal precepts which actually obtain as authoritative legal materials for decision and authoritative bases of predicting decisions in a given time and in given places; not the received ideals of legal systems, and the ideal precepts which philosophical or economic or sociological considerations might dictate or indicate.

13 Ibid 9According to Lloyd, the word “jurisprudence” is not generally used in other languages in the English sense. Thus, in French it refers to something like English “case-law.” Lloyd, Introduction to Jurisprudence (1979), 1, fn. 1.

16 Sir John Salmond’s book, Jurisprudence written in 1902 has dominated the field for a long time and is still used in Pakistan. It was revised, among others, by Glanville Williams and then by Fitzgerald.

17 As law is the adjudication of pre-existing rights, if we maintain that the judge is using his discretion, he is not only creating new law, but also applying it retrospectively.

18 In Britain, Bentham has reigned supreme and it has been maintained that it is the law that grants rights and it is the law that takes them away. The public interest is usually in the forefront. The independent existence of natural rights outside the ambit of law is not firmly rooted. It is also for this reason that in countries like Pakistan, where the ideas of Bentham still exist unconsciously in their pure form, the idea of natural rights and human rights in the American sense has not been fully comprehended.

19 Lloyd has a theory that the study of “theories of law” was ignored in Britain because of the apprenticeship system prevalent in England for the teaching of law, there being no regular university teaching. In addition to this, there was the hard-headed, practice oriented, attitude of the British lawyer, who was not interested in “mere theory.” Lloyd, Introduction to Jurisprudence, 3. The truth appears to be that British positivist theories and the use of “discretion” by the judge have been subjected to severe criticism by American jurists like Dworkin. The change in the study of jurisprudence in Britain appears to be the result of this criticism.

22 For example, says Dworkin, we may raise the question whether the most fundamental! principles of the constitution, which define who is competent to make law and how, themselves be considered part of the law? The question concerns the theories of legitimacy as well as that of jurisdiction. Further, if these are law then the right of the judges to decide what the constitution requires appears to be confirmed. This question, therefore, affects the conceptual part of the theory as well. Ronald Dworkin, Taking Rights Seriously, iv.

23 Jurists like Roscoe Pound do not consider these interests to be mere values, but individual and social wants that need to be satisfied and reconciled. See Edgar Bodenheimer, Jurisprudence: The Philosophy and Method of the Law (Cambridge, Massachusetts: Harvard University Press, 1974), 118. [hereinafter referred to as Bodenheimer, Jurisprudence].

25  Some Western jurists, like Kelsen and Alf Ross, have rejected the use of values as a reliable guide for justice. These jurists maintain that the use of these values leads to irrationality. Bodenheimer, Jurisprudence, 203.

26 A detailed study of the Islamic legal system shows that some of Dworkin’s ideas may fit in perfectly with the system.