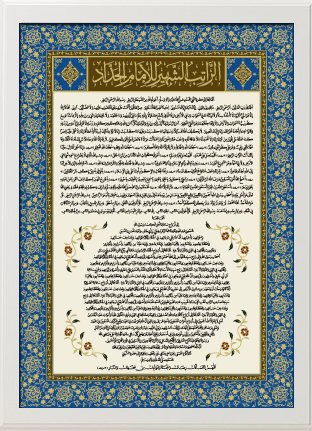 The Means for the Devout to the Ratib al-Haddad

Ratib al-Haddad comprises of verses of the Quran and the supplications of the Prophet ﷺ. The virtues of the Ratib, both worldly and religious, material and spiritual, are as the reader will see, immense. The optimal way of its recitation is once in the morning and once in the evening, although it may be recited just once in the evening. There is no need for a specific ijaza (permission) to recite it, as the litany, based upon the Quran and prophetic Hadiths, was not meant for a particular group of people, but was intended for the entire believing nation.

The Litany came to the Imam through divine inspiration and was composed on the night of 27th Ramadan 1071 AH, on the Night of Destiny. The stimulus for its composition was a request by a student of the imam, a man named Amir from the Bani Sa‘d, who lived in a village near Shibam. His purpose was to have a litany that would be a protection for all who recited it and that would contain specific items pertaining to the beliefs of the Ahl as-Sunna wa’l-Jama’a, to counteract the effect of the Zaydi invasion of Hadramawt.

Ratib al-Haddad was first instituted in Amir’s village with the Imam’s permission, then at the Imam’s mosque at al- Hawi in 1072AH. It was recited regularly in congregation after the Isha’ prayer, except in the month of Ramadan, when it was recited before Isha to allow time for the Tarawih prayers.

The Imam said that the Ratib would protect the town where it was recited, and would help people obtain the fulfilment of their requests from Allah. When he went for the Hajj he instituted it in Makka and in Madina. Ever since, its recitation has been established as a daily litany and is continued every night.

It is related that Allah fulfils the needs of those who recite Ratib al-Haddad according to the intentions that have been made for its recitation. The accounts of its witnessed blessings, especially those in relation to the relief of distress, and protection from calamities are many. The spiritual assistance (madad) that flows from the recitation of Ratib al-Haddad is due to the fact that these Prophetic invocations were received through divine inspiration (ilham). When particular invocations are received in this way they are filled with baraka that is linked with the spiritual state of the saint. In his commentary of the Hizb ul-Bahr, Shaykh Ahmad Zarruq relates:

The litanies of the masters of the people of perfection are mingled with their spiritual states. They have originated from their inspirations and are accompanied with miracles. They encompass the outpouring of their knowledge, the etiquette of their direction, and their knowledge of the path. They include the indication to the reality, the remembrance of the grandness, greatness, and exaltedness of Allah, the recollection of the lowliness of the soul and a recollection of their faults and sins.

Hence, one will find that many benefits are related in reciting the litanies and invocations compiled by the people of gnosis and sainthood. The majesty of Imam al-Haddad’s sainthood was manifest in his very being. He was awe-inspiring because of the spiritual power emanating from him, as he related, ‘Allah, Mighty and Majestic is He, clothes us with awesome dignity, for in reality we are people of beauty.’ And Sayyid Ahmad ibn Hashim al-Habashi said, ‘I bear witness that Sayyidi Abdallah is a spiritual being in whom no trace of humanity remains.’

The Imam once said:

Were all the people of this age, old, young, male female to come to us, they would all benefit, both in their religious and worldly affairs, their outward and their inward, in the immediate and remote future. There are people whose bodies are in the West but their spirits are here with us, and there are others whose condition is the opposite of this.

The spiritual assistance (madad) of the Imam carries the seekers on their ascent, despite their weaknesses in their hearts. He protects them from their own imperfections. He would say, ‘Those whom we come to know, we neither abandon them to shame or the flame.’

The Imam would say, ‘We love and look after everyone whom we see eager to tread the path to Allah the Exalted. And I rejoice for the seeker who is true with himself, for he assists me with the blessing of his sincerity to take him along the path. For the Shaykh’s love will evidently differ in intensity according to the seeker’s sincerity, conformity and desire.’

The great Gnostic Saint of Allah, and Shaykh of the Ba Alawi tariqa, the late Habib Ahmad Mashhur al-Haddad X would give special permission to recite Ratib al-Haddad at particular times, as well as in times of difficulty and stress. When the reciter comes to the Fatiha, he would say that the spirit of Imam al-Haddad responds and that the Imam’s spiritual help is present during the supplication that follows to aid its acceptance.

Some related benefits of the Ratib al-Haddad

Towards the end of his book Habib Alawi mentions some of the benefits and virtues of Ratib al-Haddad and he says:

The Sayyid, the great scholar and Qadi, Saqqaf bin Muhammad bin Taha as-Saqqaf Ba-Alawi, may Allah have mercy upon him, has mentioned, ‘Whoever recites the Ratib of our master al-Haddad every night, it will suffice him for every other litany of the evening as it is comprehensive, beneficial, tried and tested.’ The great scholar and Gnostic Umar bin Zain bin Sumayt Ba-Alawi has related that Imam al- Haddad said, ‘Our Ratib is like an iron wall for every city in which it is recited.’

When Tuhmas, that is Nadir Shah, the foreign leader who had invaded many cities and people, set his sights on al-Awgan and threatened the people therein; the Sultan of al-Awgan, Sulayman said to him, ‘You will not, by the permission of Allah, be able to overpower us, even though you may have conquered other cities, for we have a fortified fortress; the Ratib of our master Abdallah bin Alawi al-Haddad.’ He ordered every one of his soldiers and the people of his city to recite the blessed Ratib. And so Allah did not give Tuhmas power over his cities or over his armies through the blessing of the noble Ratib. The Sultan lived during the time of our master the Compiler of the Ratib, and had written to him informing him of the impending calamity. So the Imam sent him the noble Ratib and ordered him to recite it saying, ‘It will protect you and your people from him.’

It is also related by the great scholar and Qadi of Tarim our master, Alawi bin Ahmad bin Sumayt رَحِمَهُ ٱللَّٰهُ , who said:

I heard that some of the Arabs were once taken captive by some Christians who took them to their king. When they were brought before him, he ordered that they be executed. The interpreter of the group said, ‘This group are from the people of the Compiler of the Ratib.’ The King then said, ‘In which case let them go! And take them to the nearest Muslim city.’ They were spared because of the Compiler of the Ratib. Amongst the Christians there were some who believed in the blessings of the Ratib, that it would protect their ships, even though they were disbelievers. It is said that they would hire a Muslim to pray the Ratib on their boats.

It has also been related that a man left to travel to his city when some Bedouins followed him to rob him. So he drew a circle around himself and began to recite Ratib al-Haddad. They were blinded from him while he sat looking at them.

The Sayyid Ali bin Hasan رَحِمَهُ ٱللَّٰهُ once related, ‘I slept one night and I did not recite the Ratib, then I had a dream and I saw an angel saying, “Every night I would serve you with this and that…” and he mentioned many blessings. “Tonight I have not served you with anything, for you did not read the Ratib.” I got up immediately and began reciting the Ratib.’

One of the greatest benefits of reciting the Ratib is that the spirit of the Compiler of the Ratib is present during its recitation, as mentioned by the master Muhammad bin Zain bin Sumait رَحِمَهُ ٱللَّٰهُ.

It has also been related from the Compiler of the Ratib himself that whoever is regular in the recitation of Ratib al-Haddad will receive a good ending to his life (husn ai-khatima ‘Ind al-mawt).

(The reader should praise Allah and supplicate here for whatever they wish).