You Are Here » Home » Miscellaneous » Topical and Current Affairs » The Saudis’ Heads Are in the Clouds of Peace, Their Feet in the Yemeni Mud 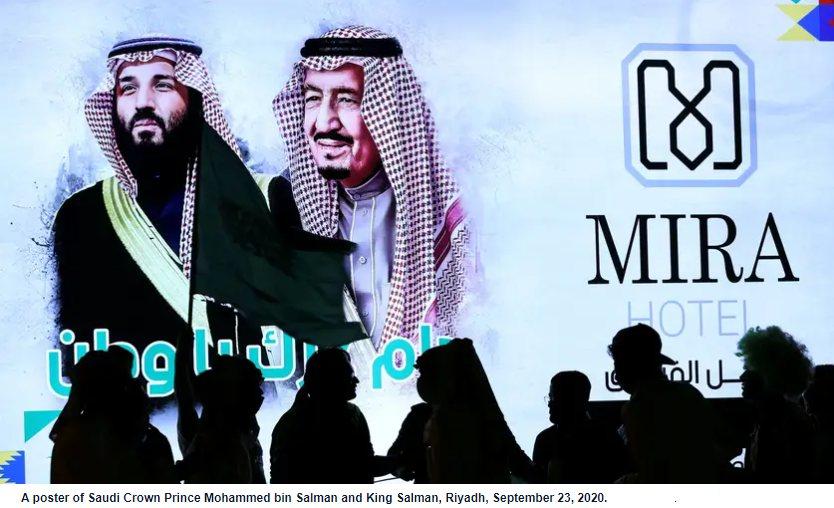 The crown prince is interested in a normalization with Israel and his father likes the Arab Peace Initiative, but the war in Yemen and threats to Prince Mohammed at home are keeping them busy

Don’t hold your breath for a normalization agreement with Saudi Arabia. Both Arab and Western pundits attribute the delay to a dispute between King Salman and his son, Crown Prince Mohammed, over the Israeli-Palestinian conflict.

In a rare speech this week, Salman said Saudi Arabia still adheres to the Arab Peace Initiative, which conditions normalization on an Israeli withdrawal to the 1967 lines and the establishment of a Palestinian state. But the prince wants to speed up normalization as part of his strategic and, above all, economic vision.

Salman is the second Saudi king to address the UN General Assembly (the first was King Saud in 1957). In his speech, he focused on three issues; first, Iran, which he blamed for all regional instability and accused of “disregard for the stability of the global economy and security of oil supplies to the international markets.”

He also extolled Saudi Arabia as Islam’s birthplace and custodian of the Muslim holy sites, and pledged support for the Israeli-Palestinian peace process. He never mentioned Israel’s peace agreements with the United Arab Emirates and Bahrain.

Was he trying to prove that he’s still in control of his kingdom and that, with all due respect to his son, he sets foreign policy? Is this an intergenerational dispute, pitting the son’s project against the father’s traditional attitudes?

Is it a dispute between pan-Arab ideology, which sees the Palestinian problem as a pan-Arab source of mobilization and identity, and the crown prince’s worldview whereby each country should act in its own interests without considering pan-Arab interests or traditional Arab nationalism, in which the Palestinian issue was viewed as an original sin that must be cleansed? Or maybe it’s merely a tactical delay while awaiting the results of the U.S. elections to decide who should get the Saudi “gift” and who will pay more for it?

It’s hard to know which of these factors dictated Salman’s speech. Saudi Arabia’s decision-making processes are enigmatic, as are relationships among members of the royal family and the kingdom’s domestic and foreign-policy considerations.

Just a few weeks ago, shortly after the normalization with the UAE was announced, Donald Trump’s son-in-law and adviser, Jared Kushner, said that Saudi Arabia would be the next country to make peace with Israel and that it would happen very soon. Kushner, the person in Washington closest to the crown prince, would presumably have known what Mohammed was thinking. But apparently, even the crown prince didn’t foresee the delay.

Moreover, it’s not clear whether the delay is a matter of principle – that is, until a Palestinian state arises, or at least until Israeli-Palestinian negotiations resume – as Salman said, or only a temporary one, until his son manages to persuade him.

The difference in the two royals’ positions also raises another question. Saudi Arabia has provided an umbrella for the latest peace deals. Not only did it not condemn them, it praised the UAE and Bahrain for taking this step, which was coordinated with the crown prince, and opened its airspace to flights to and from Israel.

Moreover, an important cleric – Abdul Rahman al-Sudais, the imam of Mecca’s biggest mosque – gave a sermon encouraging foreign policy through dialogue, even with the Jews. He based his argument on the prophet Mohammed’s policy toward the Jewish community in the Arabian Peninsula.

This sermon, which sparked a storm of criticism on social media, was seen as a move aimed at preparing public opinion in Saudi Arabia and the Muslim world for a historic turnabout in the kingdom’s relationship with Israel.

So the question arises: Did all this happen in defiance of Salman’s wishes?

What’s clear is Riyadh’s need to make peace with Washington, either before or as part of a deal with Israel. The main dispute between them is the war in Yemen, which began after Salman was crowned in 2015.

In this war, the Saudi and UAE armies have treated Yemen’s civilian population brutally and used American weapons to do so. More than 125,000 people have been killed, including 14,000 who were killed in deliberate attacks on civilian targets.

Public and international pressure led Trump’s predecessor, Barack Obama, to freeze an arms deal with Riyadh in 2016 as a way of pressuring the Saudis to change their tactics in Yemen. One year later, Trump reversed that decision and opened the floodgates of U.S. arms sales to the Saudis.

In 2018, Saudi Arabia was once again in the House of Representatives’ sights over the murder of journalist Jamal Khashoggi at the Saudi consulate in Istanbul. Since then, Mohammed bin Salman hasn’t visited Washington, having been told that he’s persona non grata in Congress and that nobody outside the White House is likely to want to meet with him.

The Saudis’ war in Yemen has reappeared on the Washington agenda due to a partially classified report on U.S. involvement in the conflict written by the State Department’s inspector general. The document’s unclassified sections, which were reported in the American media, reveal the magnitude of war crimes by Saudi and Emirati forces and their mercenaries, to the point that the United States faces a risk of prosecution at the International Criminal Court.

Oona Hathaway, a former Department of Defense lawyer and now a Yale professor, told The New York Times: “If I were in the State Department, I would be freaking out about my potential for liability. I think anyone who’s involved in this program should get themselves a lawyer.”

State Department bureaucrats have given similar warnings to Trump and both his secretaries of state, Rex Tillerson and Mike Pompeo. But Trump made his usual reply: Saudi Arabia, he said, has “nothing but cash,” which it uses to buy American services, protection and other goods. Regarding the slaughter of civilians in Yemen, he said the Saudis “don’t know how to use” American weapons.

Congress didn’t believe Trump’s explanations, and in April 2019, it passed a bipartisan resolution calling for an end to U.S. military involvement in Yemen. Trump vetoed the resolution and circumvented the ban on arms sales to Riyadh by declaring a state of emergency over Iran, which allowed him to continue complying with Saudi requests.

The U.S. government did budget $750 million to train Saudi soldiers and pilots on fighting in populated areas, with the goal of reducing harm to civilians. It also gave the Saudis a list of 33,000 targets they shouldn’t strike. But the Saudis don’t seem to have been overly impressed, and violations continue to this day.

Incidentally, one of the Saudi cadets who took part in the training program, 2nd Lt. Mohammed Alshamrani, killed three American soldiers and wounded eight in his classroom at the Pensacola airbase in Florida last December. It turns out he was a supporter of Al-Qaida. His participation in the course thus shows that the stringent filters Washington instituted after 9/11 remain full of holes.

Unlike Saudi Arabia, the UAE understood the dangers of its involvement in the war in Yemen and withdrew its forces, overcoming the ban on selling it F-35 fighter jets and other arms. It then overcame the Israeli obstacle by signing this month’s peace deal.

Mohammed bin Salman, who started the war in Yemen along with his father, is still wallowing in the Yemeni mud that has complicated his relationship with the United States. And that’s on top of his resounding failures in managing the country’s foreign policy, like forcing then-Lebanese Prime Minister Saad Hariri to resign, imposing a blockade on Qatar, waging an unsuccessful oil war with Russia that sent prices plummeting and abandoning the Palestinian issue.

Domestic issues haven’t gone that well for the crown prince either. His Vision 2030 is stumbling. The country’s treasury has had problems funding megalomaniac projects like his city of the future, which is supposed to involve three countries (Saudi Arabia, Egypt and Jordan), diversify Saudi Arabia’s sources of income and reduce its dependence on oil. So far, it remains on paper.

He did boast an impressive achievement in the war on corruption when he detained dozens of billionaires at the Ritz-Carlton Hotel and shook them down, but this was more about squeezing his political rivals’ windpipes than fighting corruption.

The power struggles haven’t ended. In August, the crown prince ousted Gen. Fahd bin Turki Al Saud, the commander of the Arab coalition in Yemen, and his son, Prince Abdulaziz, who was deputy governor of the Al Jawf region, ostensibly because they were suspected of corruption. But the real reason was that they belong to a rival family faction, and Mohammed, who paved his way to power by removing a long list of political rivals, apparently fears either a military or political coup against him as the time for choosing Salman’s successor nears.

He can only envy his friend, Crown Prince Mohammed bin Zayed, the UAE’s de facto ruler who extricated his country from the war in Yemen and became Washington’s darling – not only because he made peace with Israel. And above all, he isn’t surrounded by hostile relatives.

But Mohammed bin Salman – who according to U.S. intelligence  didn’t hesitate to put his own mother under house arrest and keep her away from his father for fear she would work against him – may also prove to be someone who doesn’t see obeying his parents as a cardinal virtue. King Salman may be able to give speeches in support of the Palestinians, but his son, as defense minister, has the power to stage a coup against his father if he thinks this will serve him or his agenda, which might yet include peace with Israel.