You Are Here » Home » Other Knowledge » The Story of the Tulip 🌷 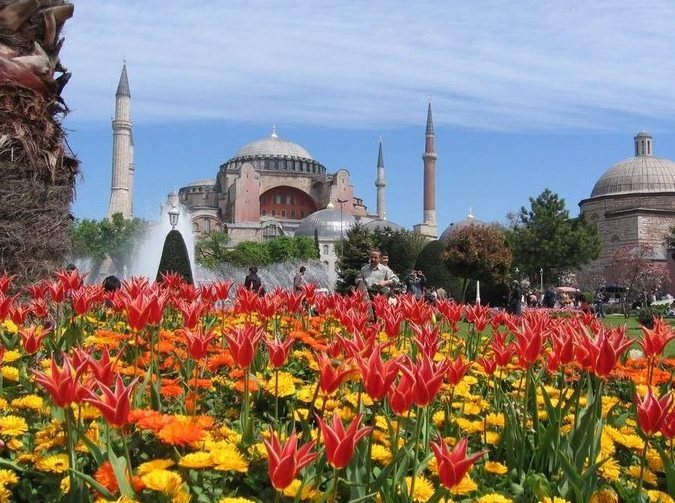 When people think of the tulip, almost everyone automatically associates this beautiful flower with the Netherlands. And yes, in our era, the Netherlands produces the largest quantity of this flower and does have its most gorgeous varieties. But there’s far more to the story!
The tulip was original found in the wild in the mountains of Central Asia, where the Turkmen tribes lived. As the Turks moved towards Anatolia and the Seljuks pushed Westward, they took this flower with them and began cultivating it for its beauty. Once the Ottomans came to power, they too experimented with this plant to produce more varieties. After the conquest of Constantinople in 1453, the Ottomans made Istanbul the tulip capital of the world, and their private gardens (especially the Gülhane Park) still has varieties of tulips to this day. Every year, Istanbul holds tulip festivals and competitions that date back to this period.
The Ottoman Sultan Suleiman the Magnificent (d. 1566 CE) was especially fond of tulips, and wore them on his garments. In fact, the Grand Mufti of the time, a very famous scholar and mufassir by the name of Ebu Sa’ud Effendi (d. 1574 CE), had a hobby of experimenting with different tulip breeds, and produced some of the finest tulips of his generation.
So how, then, did tulips end up in Europe?! Well, the Austrian Empire sent an ambassador to the court of Suleiman the Magnificent, a certain ‘man of letters’ by the name of Ogier Ghiselin de Busbecq (d. 1592). This Mr. Busbecq was an avid naturalist and herbalist, and when he saw the beautiful tulips in the palace of the Ottoman Sultan and on his presence, he wrote home, gushing with excitement about this exquisite flower that he had seen. But since his knowledge of Turkish was broken, when he asked about the beautiful flower on the Sultan’s personage, his interpreter assumed he was asking about the Sultan’s turban and gave him the name of that; hence he wrote back of an amazing flower called ‘tulip’, from the Turkish word tülbend, which comes from the Persian dalband – meaning a turban (and of course our English word ‘turban’ also comes from the Turkish/Persian cognate).
When the aforementioned Mr. Busbecq returned home in 1562, he made sure to take samples of this ‘turban flower’ with him, and within a few years the people were crazy for it! Tulip-mania officially began in Europe in the 17th century, and more and more varieties were created, until eventually the Netherlands became associated with this amazingly gorgeous flower of the Turkmen folks.
And that, dear reader, is how a wild flower from Central Asia ended up becoming the national flower of the Netherlands!  🌷
Share
Facebook Twitter Pinterest Linkedin