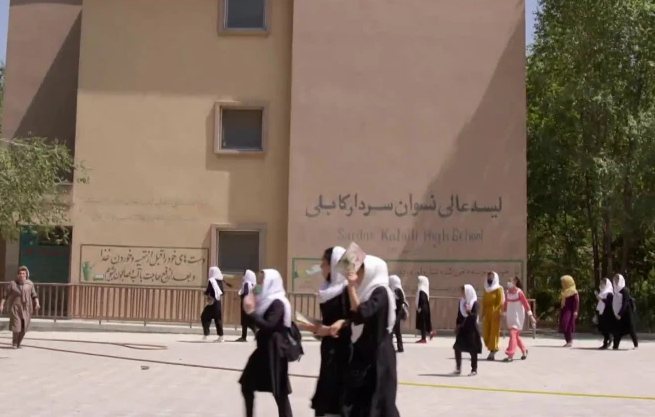 By omitting the history and context of both the Taliban and the Northern Alliance, the United States has been able to paint itself as a liberator of women. This role is belied by examining the more entangled, complicit, and contradictory role that history reveals. Through cold war politics, the U.S. nurtured the environment in which the Taliban grew; it ignored their violations of human rights and gender apartheid in the name of strategic interests; it empowered the warlords of the Northern Alliance with their dismal human rights records, including mass rapes and forced marriages; and it failed to prevent the co-optation of the current political process by these same violators of women’s and men’s human rights. If concern about Afghan women was at the center of U.S. foreign policy, the United States would have made different decisions from the cold war to the present. The expression of concern and support for Afghan women by the Bush administration thus can best be seen as a strategy in the war of words within the “war on terror.” Flanders (2001) argues that the early expressions of support for Afghan women in the midst of U.S. military action served to paint a “feminist glow on some of the most brutal bombings of the 2001 campaign.”

It is ironic that, although ideologically opposed to each other, both the Taliban and the U.S. have used Afghan women as symbols in their respective wars. For the Taliban, control of women symbolized adherence to the hybridization of Pashtun traditions with a radical interpretation of Islam – their recipe for the creation of an ideal society. The United States has used Afghan women as a symbol to legitimate their bombing campaign of Afghanistan and more broadly to legitimate their “war on terror.” While such symbolic use of Afghan women has been expedient for the U.S., the dangers of this strategy are many, both for Afghan women and for the broader context of global politics.

For Afghan women, the first danger is that their own needs and issues may be rendered invisible. As the U.S. focuses on the Taliban’s extremes of gender repression as the sole obstacle in Afghan women’s way of achieving dignity and rights, they are able to claim the role of liberator, for the Taliban’s restrictive edicts are no longer de jure rule. The task of restoring women to their place of dignity and returning to them their rights is said to be accomplished. The U.S. does not, therefore, have to listen to the much more complex and comprehensive needs and desires of diverse Afghan women; Afghan women can simply be a symbol deployed strategically to gain support for the war on terror.

The U.S. focus on the gender restrictive policies of the Taliban within the context of its military offensive against Islamicist forces may actually have sown the seeds for increased repression of Afghan women in the future. Rina Amiri, an Afghan-American and a senior researcher at Harvard’s Kennedy School of Government writes,

“If we cast a glance backward through the annals of Afghan history, we see that women have long been the pawns in a struggle between the elite modernists, usually defined as pro-Western, and the religious and tribal-based traditionalists” (Amiri 2001).

Over the past century, Afghanistan has a history of reformist leaders creating new opportunities for women and then traditionalists taking over and responding with increasing restrictions. Modemizers used women as symbols of a changing order by promoting women’s education, their unveiling, and their involvement in public life.

There were signs that the pendulum was swinging in response to the U.S. military intervention, as women were once again being used as a primary symbol for political and ideological ends. A female teacher in Kandahar was attacked with acid in mid-April, 2002. According to a Reuters report, the attack occurred:

After handwritten pamphlets were found circulating in the city warning men against sending their daughters to school or their wives to work. A previously unknown militant group named Tanzeem al-Fatah Afghanistan (“organization for the victory of Afghanistan”) allegedly distributed the pamphlets (Reuters, cited in Human Rights Watch 2002a: 2).

This attack is an ominous reminder of what is at stake in the strategy of using Afghan women as symbols.

On December 3, 2001 Time magazine focus on the veil played on one of the key symbols of Islam that has been used to assert the superiority of the West over the East. Thus, images of fully-veiled Afghan women, displayed in Time magazine, as well as assertions of fighting for Afghan women’s rights and dignity, both reinforced this long-standing Orientalist dynamic in which the West asserts its superiority over the East.

Laura Nader (1989) has argued that this form of Orientalist discourse not only provides the West with a sense of superiority, but it also serves to keep Western women from analyzing and mobilizing more fully against forces that continue to oppress them (the wage gap, lack of equal political representation, endemic gendered violence, etc.). Furthermore, Nader argues that there is a parallel process – Occidentalism – through which the East asserts its own positional superiority by representing Western women as oppressed by a corrupt society (particularly through widely-publicized stories of rape, molestation, sexual harassment, and other forms of gendered violence). The effects of such representation on women in both East and West are profound. She writes:

In both the West and the East one can realize the evolution and perpetuation of female subordination. Both East and West are of patriarchal systems of control. Both are publicly male dominated societies, and more specifically both have male dominated governments. In both East and West women work longer than men as a class, and in both cultures women and children constitute the majority of the poor and impoverished…. Yet, in both cultures the manner of gender construction whereby the inside culture is idealized in comparison whereby the inside culture is idealized in comparison to the outside culture allows members of both East and West to feel superior to the other, while ignoring common traits (Nader 1989 : 334)

Finally, there is one particularly grave and immediate concern about the symbolic use of Afghan women by the Bush administration. Given that many Islamicists construct their radical interpretations of Islam within the context of attempts to counter what they perceive as U.S. political and cultural hegemony, a U.S. condemnation of gender restrictive policies, in particular, the veil and compulsory veiling, may serve to reinforce a commitment to such policies. Amiri’s analysis suggests that the West must heed the danger of the swinging pendulum (Amiri 2001). If the West — including Western feminists — continue to demonize Islam, to represent oppression of women as the center of Muslim societies and Muslim traditions, then we will simply be sowing the seeds for a counter swing comparable to that of Taliban policies. Inflammatory but hollow rhetoric in which the U.S. claims to be fighting for Afghan women and restoring to them their dignity and their rights, may serve short-term interests at home, but may also fuel the fire of Islamic extremism abroad. And as we have seen since September 11th, the effects of such extremist movements will not only be felt by Afghan women, but may also reach U.S. soil.

The Time magazine cover article on Afghan women epitomized the problematic dynamics of representation elaborated above. The photographs and text focused on the veil, compulsory veiling, and other Taliban edicts. The complicity of past and more recent U.S. foreign policy in the rise and rule of the Taliban was omitted, and the human rights abuses and gender repressive policies of the U.S. allies in Afghanistan received only a brief mention. Furthermore, there were prominent photographs of an elite Afghan family celebrating a wedding, and the few images of impoverished Afghan women (by far the majority in this war-ravaged country, that has suffered years of drought and shortages of food, making it one of the poorest countries in the world) were positioned less prominently. And finally, there was the cover headline, emblazoned across the image of an Afghan woman with her head covered but her face unveiled: “Lifting the Veil.” Ironically this article contained two statements by Afghan women activists asserting that the veil is not the primary issue. Soraya Parlika, a prominent woman activist in Kabul, said,

“The burka (veil) is not the main problem of women…. First women should find work and improve their economic situation” (quoted in McCarthy 2001:46).

“First we need peace. Then we need a central government. Then we need education. After all that we will be in a position to make a decision on the burka” (quoted in Lacayo 2001:38).

However, the editors of Time did not heed their words and instead reproduced the West’s favorite symbol of Muslim women. It is important to note that Ms. Parlika and Dr. Staniczaio are not alone in emphasizing issues other than veiling, for the veil is not mentioned in even one of the 62 points of the Brussels Proclamation. Time magazine’s article on Afghan women, by foregrounding the veil and compulsory veiling, was able to produce a story of Islamic repression transformed by Western-supported liberation that suppressed the real issues, challenges, and goals that Afghan women have articulated for themselves. This narrative, evident in the Time article and Laura Bush’s speeches alike provides fuel to the Islamic extremist fire, the results of which may be more repressive gender policies in the name of tradition and anti-imperialism and perhaps even more attacks on U.S. soil.

If the U.S. and the international community follow the women of Afghanistan in their discourse and support them in their priorities, then the world could demonstrate true solidarity with Afghan
women. If, however, the U.S. continues to use Afghan women as “symbols and pawns” in the war against terror, then Afghan women will continue to suffer and extremists will be further empowered. Our best hope for the future – for Afghan women and the rest of the world alike – will come if we follow the advice of Rina Amiri who writes,

“Let Afghan women guide us in moving toward an inclusive peace in Afghanistan, beyond the confines of rhetoric and symbols” (Amiri 2002).