A new report by the British National Party may recycle Fascist language and conspiracies, but the main item of interest is a new argument in the European far-right: Who’s the enemy, Jews or Muslims? 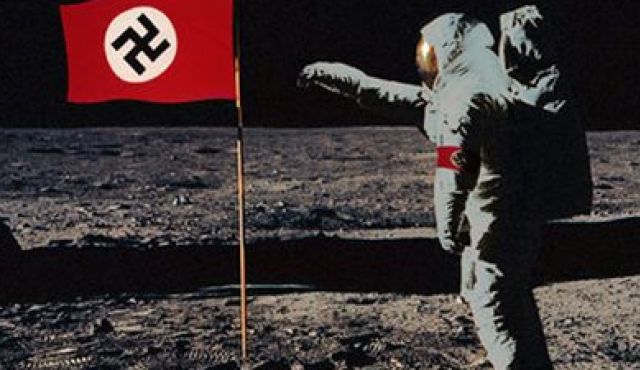 Who’s a confused white supremacist to salute and who to hate? It’s gotten complicated.

The battle for leadership of Britain’s far-right took a bizarre twist this month when the British National Party, long the most prominent racist group in British politics, issued a detailed report accusing their main rivals, the English Defense League, of being the “useful idiots” of “neo-cons” and “ultra-Zionists.”

The report authored by Nick Griffin, the leader of the BNP and member of the European Parliament, reflects the growing split in the far-right in Europe. A new generation of nationalists is trying to shed its neo-Nazi image. They are not anti-Semitic, they claim – and are focusing their campaigning against Muslim communities instead.

The report titled “Exposing EDL,” which has been published on the BNP website along with a 48-minute video of Griffin presenting its findings, has caused a stir within the far-right. It accuses the English Defense League and its leaders of being in the pay of “ultra-Zionists”.

The report also claims that the EDL is being financed by Jewish millionaires, including right-wing supporters such as Irving Moskowitz but also liberal-left funders like financier George Soros.

Ironically, much of the “facts” and the language in the detailed report seem to have been lifted from similar texts on radical left-wing publications and pro-Palestinian websites. That also applies to the rehashed accusation that U.S. corporate giant Halliburton has a global strategy to promote war for its own financial gain – this time by financing the EDL’s campaign against Muslim influence in Britain.

Griffin’s report is another addition to the ever-expanding conspiracy theory library on the warmongering cabal of Jews, neo-cons, homosexuals and international corporations. It would not normally warrant serious reading, but it intrigues due to the light it sheds on the metamorphosis in the European racist right. It shows how the far-right is arguing within itself whether the enemies are the Jews or the Muslims.

Cambridge-educated Griffin has tried to “modernize” the BNP since assuming leadership in 1999. His anti-Semitic leanings were clear in the past, as when he used the term “Holohoax” and wrote “Who are the Mindbenders?” about the apparent control of Jews over the British media.

But he is aware that many of his potential supporters today aren’t interested in Jews. The real enemy, in their eyes, is the growing Muslim population.

The upshot is that like some counterparts on the opposite end of the political spectrum, his latest ideology eschews anti-Semitism. In the report he goes so far as to describe “the stupidity or dishonesty of anti-Semitic conspiracy theorists when they seek to sell their simplistic ‘it’s the Jews’ line,” and praises “the brave and well-informed work of individual Jews such as Seymour Hersh. A long-time critic of American militarist aggression, Hersh exposed the warmongering alliance between the CIA and Sunni Muslim and Zionist extremism in a far-sighted study.”

Griffin even has a few kind words for some Zionists and Israelis: “The sincere Zionists, the people who built the kibbutzim and so on may not be our cup of tea,” he says in his presentation, “but they were genuine and sincere and they wanted a homeland for their people and we can understand that.”

Yet he still has to satisfy a racist hardcore membership that continues to hate Jews and anyone who is not white. There he finds succor in “ultra-Zionist terrorist sympathizers.” They are “the ones who from the safety of the United States use vast amounts of money to manipulate and twist and make sure there’s no chance of peace, they’re no friends of anyone.”

As for Islam, he doesn’t want to be seen as “soft”, but says straight out: ” If we didn’t have any Muslims in this country, large parts of London, large parts of Birmingham, large parts of our cities would still be desperately dangerous.” He reminds his erstwhile supporters that “It’s not just Islam, it’s immigration as a whole.”

Griffin is playing a desperate balancing act, trying to connect the old racist, anti-Semitic camp with the new far-right which is seeking to create an alliance with the Jews to fight the Muslims.

The last time the British racist right played a significant role in politics was with the British Union of Fascists under Oswald Mosley in the early 1930s.

After being shunned by the public and right-wing newspapers, the Fascists had lost all credibility even before the Second World War broke out. In subsequent decades, they splintered into marginal factions that coalesced mainly around the National Front and from 1982 mainly came together around the new BNP.

The party has had some limited electoral success, gaining a handful of seats on local councils and on the London Assembly. In 2009, it managed to get two of its members elected, including Griffin to the European Parliament, with over six percent of the vote in an election where only a third of eligible voters turned out. Despite these gains on a national level, Britain’s electoral system and multi-cultural environment has not made things easy for the BNP, which received 1.9 percent of the total vote in the last general election and have never won a seat in parliament.

BNP and Griffin’s failure to capitalize on frustrations of the British white working-class has left a vacuum on the far-right. Over the last three years, many BNP members have left the party. As a result, the new EDL, which was founded originally as a local group in Luton, north of London, to counter demonstrations by Islamist radicals against British troops returning from Afghanistan, emerged as the ascendant nationalist movement.

“While the BNP sees itself as a political party, trying to gain control through the ballot box, the EDL has a more aggressive and confrontational style of politics,” explains Nick Lowles, director of the anti-racist group Hope Not Hate. “It has become more successful and at a recent demonstration, EDL brought out 600 supporters, while the BNP could muster only fifty.” But the differences between them are not merely stylistic.

The Sikh branch of the “indigenous British” party

While the BNP campaigned for a Britain that would allow only “indigenous British” people as citizens and many of its members were openly anti-Semitic, EDL professed to have no opposition to other ethnic groups, officially welcomed Black and Asian members and even set up Jewish and Sikh “divisions” within the movement.

These divisions are mainly a sham, with no more than a handful of members who are mostly American Kahanists and have no connections in the wider Jewish community, but they are a part of wider strategy by EDL, and other far-right groups in Europe to focus only on Islam as the enemy. EDL marchers carry Israeli flags, along with the Union Jack and leaders of other far-right European parties have been on visits to Israel, including pilgrimages to Yad Vashem.

This drives Griffin crazy as he sees the BNP numbers dwindling and his supporters drifting to a movement that purports to be Zionist and Jew-friendly.

It won’t work, he tells them, because: “A lot of Jews who do have a lot of influence in the mass-media in the western world, a lot of them are very left wing. And they hate these far-right Zionist Jews. They call them fascists just as they call us fascists.”

He may have a point there.

While some European Jewish communities have been tempted to engage with the new far-right parties in their countries after they publicly shed their old ties to Nazism and anti-Semitism, EDL has so far failed in its attempts to entice elements of the Jewish community to cooperate in its demonstrations against the building of mosques and other Muslim activities. No official Jewish organization has joined at any of the events.

At a 2010 counterdemonstration of a pro-Palestinian boycott event outside a branch of the Israeli cosmetics firm Ahava, Jewish activists of Britain’s Zionist Federation were forced by police to stand alongside EDL but ZF members made it clear that they had no connection.

Mark Gardner, the communications director of the Community Security Trust, the British-Jewish organization which tracks racism and threats to Jews, says that the EDL remains beyond the pale.

“Even the most basic analysis of the EDL,” he says “will show that this organization is racist. They are against all Muslims and for ethical and political reasons it’s not an organization that Jews should be encouraged to work with and tolerate.”

“For historical reasons, Jews in Britain have always set a very high bar when it comes to dealing with the far-right,” says a senior executive in a central community organization. “It was clear from the start that we could not have anything to do with the EDL, as much as they said they wanted to work with the Jewish community. If you look at what is happening in Holland for example, where Jews were quick to embrace Geert Wilders Freedom Party and are now dealing with one of its leaders coming out against circumcision, you can see we were right.”