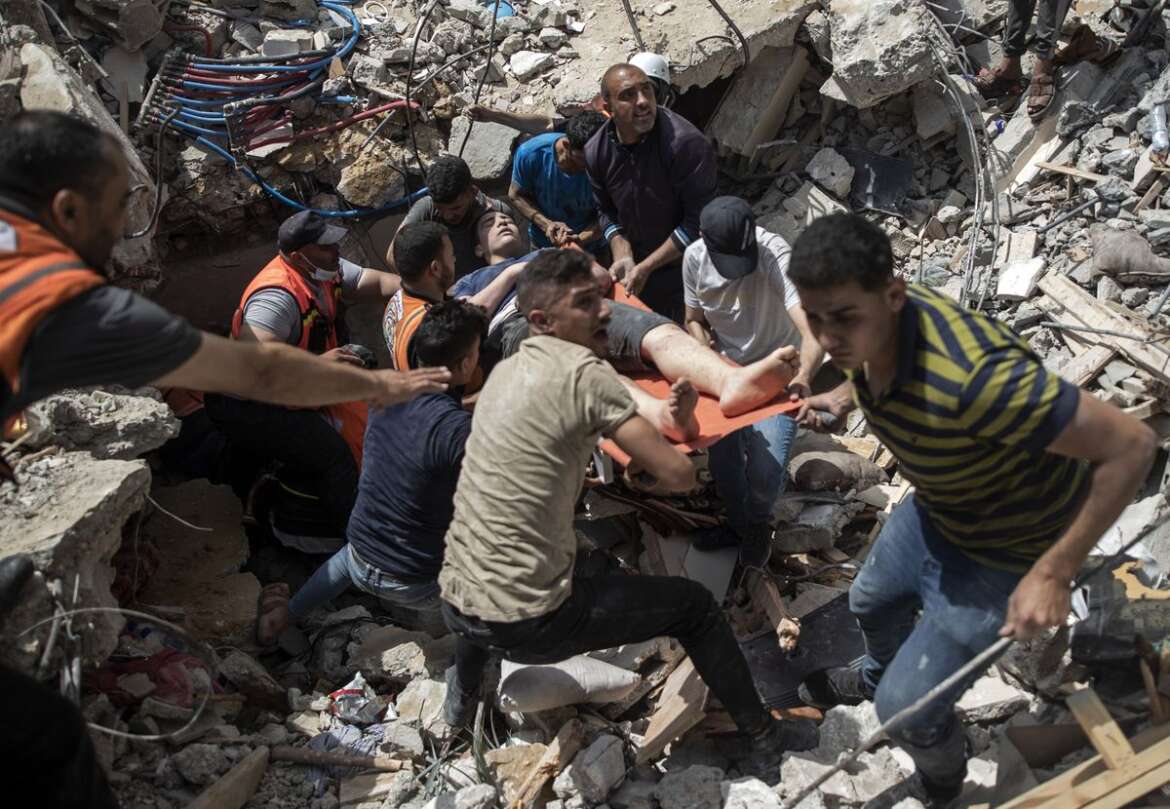 (above pic : Palestinian rescue a survivor from under the rubble of a destroyed residential building following deadly Israeli airstrikes in Gaza City, Sunday, May 16, 2021. The Israeli airstrikes flattened three buildings and killed at least 26 people Sunday, medics said, making it the deadliest single attack since heavy fighting broke out between Israel and the  Hamas nearly a week ago.)

By Nicholas Kristof –  a columnist for The Times since 2001. He has won two Pulitzer Prizes, for his coverage of China and of the genocide in Darfur.

That’s a thought worth wrestling with as many experts suggest that both Hamas and Israel are engaging in crimes of war in the current Gaza conflict. For the same reason that we deplore Hamas’s shelling of Israel, shouldn’t we also demand that Prime Minister Benjamin Netanyahu of Israel accept a cease-fire and stop bombings that kill far greater numbers of innocents?

The United States was the first country to recognize Israel upon its founding in 1948, and one of the few things that Democrats and Republicans have mostly agreed on over the decades is unwavering support for Israel.

“The deep bonds of friendship between the U.S. and Israel remain as strong and unshakable as ever,” President Barack Obama wrote soon after taking office.

Yet today, especially within the Democratic Party, those bonds are shaking as Netanyahu resists a cease-fire in Gaza. He leaves us wondering: Why should our tax dollars subsidize a rain of destruction that has killed scores of children, damaged 17 hospitals and clinics and forced 72,000 people to flee their homes?

President Biden has blocked the United Nations Security Council from calling for a cease-fire. He apparently believes that he can accomplish more with private diplomacy than with public rebukes. “Progress occurs in the Middle East when everyone knows there is simply no space between the United States and Israel,” Biden said in 2010.

Alas, it’s difficult to spot this “progress.” Netanyahu has used American cover to expand settlements and pretty much destroy any hope of a two-state solution. He has winked at domestic extremism, so that at least 100 new WhatsApp groups in Israel (with names like “Death to Arabs”) encourage violence against Palestinians. And now he is bombing Gaza and igniting street fighting that President Reuven Rivlin of Israel has called a “civil war.”

Some progress! Some young Americans see the rise of this hawkish, more extremist Israel and perceive not a plucky democracy but an oppressive military power. What strikes them most isn’t democratic values so much as what Human Rights Watch calls “crimes of apartheid.” Netanyahu also undermined bipartisan American support for Israel by undercutting Democrats like Obama and aligning himself at the hip with Donald Trump and America’s right wing.

Many of us admire a great deal about Israel. At home it has a robust democracy that gives more rights to Arab citizens than its neighbors do: Thank God Israel treats its Arab citizens better than Egypt, Syria or Saudi Arabia treat their Arab citizens.

Yet there’s also the other Israel that systematically discriminates against Palestinians in the occupied territories and seems to think it can indefinitely control them and grab their land and water without giving them voting rights.

Defenders of Israel’s policy in Gaza note that Israel sometimes warns people before destroying their buildings, that Israel, in contrast to Hamas, is not trying to kill as many civilians as possible, and that Hamas often locates military sites in civilian areas in ways that make collateral damage more likely. All true. But America should aspire to have allies with a higher moral standard than “better than Hamas.”

It’s also troubling that while the destruction of Gaza helps Netanyahu politically, it doesn’t seem to have any strategic purpose. Indeed, it arguably helps Hamas.

“This is Israel’s most failed and pointless Gaza operation ever,” wrote Aluf Benn, the editor of the Israeli newspaper Haaretz.

So bravo to Senators Bernie Sanders and Jon Ossoff for showing leadership in Congress by standing up to Netanyahu. It’s notable that both men are Jewish, for today the strongest supporters of Netanyahu’s hard-line policies are not American Jews but white evangelical Christians. A Pew survey last year found that fewer than one-third of young Jews in the United States rated Netanyahu as good or excellent, and barely one-quarter strongly opposed the B.D.S. movement to boycott Israel.

In a recent column, I asked why giving $3.8 billion a year in military assistance to a rich country like Israel is the best use of that money, instead of, say, vaccinating people in poor countries against Covid-19.

I braced myself for a torrent of criticism. There was some, much of it making legitimate counterpoints. But what struck me was how many people simply agreed with me in a way that would never have been true a decade ago.

Suggesting that the United States condition aid to Israel inevitably provokes charges of anti-Semitism, so let’s be cleareyed.