Sadly we currently see the efforts of the Christian missionary activity focused primarily on derailing Islam now more than any other period in history. Thus, we witness numerous travesties and parodies coming from them in their attempts to twist, manipulate and totally abuse historical and etymological facts. These polemics range from a variety of the utterly hilarious to the outright abusive and cruel. One such dishonest Christian missionary polemic has been the allegation of the young marriage of Aishah (radiAllahu Anha) to the Prophet Muhammad(sallallahu Alayhi wasallam). The missionaries try to accuse the Prophet of being a child molester, albeit in politically correct terms, due to the fact that Aishah (radiAllahu Anha) was betrothed (zawaj) at the age of 6 years old and the marriage was consummated (nikâh) a few years after the marriage at 9 years old when she was in full puberty. The lapse of time between the zawaj and nikâh of Aishah (radiAllahu Anha) clearly shows that her parents were waiting for her to reach puberty before her marriage was consummated. If it were not for the fact that some gullible Christians have been parroting the claims without understanding the reasons behind it, we would have not even bothered with a refutation. Such a claim is based only on conjecture and moral relativism, and not on fact. This article seeks to refute the allegation, insha’allah.

The hilarity of the whole saga of Christian missionaries accusing the Prophet(sallallahu Alayhi wasallam) of committing “child molestation” is that this contradicts the basic fact that a girl becomes a woman when she begins her menstruation cycle. The significance of menstruation that anyone with the slightest familiarity with physiology will tell you is that it is a sign that the girl is being prepared to become a mother.

Women reach puberty at different ages ranging from 8-12 years old depending on genetics, race and environment. We read that

There is little difference in the size of boys and girls until the age of ten, the growth spurt at puberty starts earlier in girls but lasts longer in boys.[1]

We also read that

Women in warmer environments reach puberty at a much earlier age than those in cold environments.

The average temperature of the country or province is considered the chief factor here, not only with regard to menstruation but as regards the whole of sexual development at puberty.[3]

Marriage at the early years of puberty was acceptable in 7th century Arabia as it was the social norm in all Semitic cultures from the Israelites to the Arabs and all nations in between. According to Hâ-Talmûd Hâ-Bavlî, which the Jews regard as their “oral Torah”, Sanhedrin 76b clearly states that it is preferable that a woman be married when she has her first menses, and in Ketuvot 6a there are rules regarding sexual intercourse with girls who have not yet menstruated. This is further collaborated when Jim West, ThD, a Baptist minister, observes the following tradition of the Israelites:

The wife was to be taken from within the larger family circle (usually at the outset of puberty or around the age of 13) in order to maintain the purity of the family line.[4]

Puberty has always been a symbol of adulthood throughout history.

Puberty is defined as the age or period at which a person is first capable of sexual reproduction, in other eras of history, a rite or celebration of this landmark event was a part of the culture.[5]

The renowned sexologists, R.E.L. Masters and Allan Edwards, in their study of Afro-Asian sexual expression states the following

Today, in many parts of North Africa, Arabia, and India, girls are wedded and bedded between the ages of five and nine; and no self-respecting female remains unmarried beyond the age of puberty.[6]

Were There Any Objections to the Marriage of the Prophet(sallallahu Alayhi wasallam) to Aishah (radiAllahu Anha)?

The answer to this is no. There are absolutely no records from Muslim, secular, or any other historical sources which even implicitly display anything other than utter joy from all parties involved over this marriage. Nabia Abbott describes the marriage of Aishah (radiAllahu Anha) to the Prophet(sallallahu Alayhi wasallam) as follows.

In no version is there any comment made on the disparity of the ages between Mohammed and Aishah or on the tender age of the bride who, at the most, could not have been over ten years old and who was still much enamoured with her play.[7]

Even the well-known critical Orientalist, W. Montgomery Watt, said the following about the Prophet’s moral character:

From the standpoint of Muhammad’s time, then, the allegations of treachery and sensuality cannot be maintained. His contemporaries did not find him morally defective in any way. On the contrary, some of the acts criticized by the modern Westerner show that Muhammad’s standards were higher than those of his time.[8]

Aside from the fact that no one was displeased with him or his actions, he was a paramount example of moral character in his society and time. Therefore, to judge the Prophet’s morality based on the standards of our society and culture today is not only absurd, but also unfair.

The Prophet’s contemporaries (both enemies and friends) clearly accepted the Prophet’s marriage to Aishah (radiAllahu Anha) without any problem. We see the evidence for this by the lack of criticism against the marriage until modern times. However, a change in culture has caused the change in our times today.

Islam And the Age of Puberty

Islam clearly teaches that adulthood starts when a person have attained puberty.

From the collection of Bukhari[11], we read the following tracts:

The boy attaining the age of puberty and the validity of their witness and the Statement of Allâh:

“And when the children among you attain the age of puberty, then let them also ask for permission (to enter).” Qur’ân 24:59.

Al Mughira said, “I attained puberty at the age of twelve.” The attaining of puberty by women is with the start of menses, as is referred to by the Statement of Allâh:

“Such of your women as have passed the age of monthly courses, for them prescribed period if you have any doubts (about their periods) is three months…” [Qur’ân, 65:4]

Thus, it is part of Islam to acknowledge the coming of puberty as the start of adulthood. It is the time when the person has already matured and is ready the responsibilities of an adult. So on what basis do the missionaries criticize the marriage of Aishah (radiAllahu Anha) since her marriage was consummated when she had reached puberty?

We also read from the same source that

…Al-Hasan bin Salih said, “I saw a neighbour of mine who became a grandmother at the age of twenty-one.”(1)

(1) The note for this reference says: “This women attained puberty at the age of nine and married to give birth to a daughter at ten; the daughter had the same experience.”[12]

Thus, it is clear that if the charge of “child molestation” were to be advanced against the Prophet(sallallahu Alayhi wasallam), we would also have to include all the Semitic people who accepted marriage at puberty as the norm.

We have thus seen that

It was the norm of the Semitic society in 7th century Arabia to allow pubescent marriages.

There was no reports of opposition to the Prophet’s marriage to Aishah (radiAllahu Anha) either from his friends or his enemies.

Even today, there are cultures who still allow pubescent marriage for their young women.

In spite of facing these well-known facts, the missionaries would still have the audacity to point a finger at the Prophet Muhammad(sallallahu Alayhi wasallam) for immorality. Yet, it was he who had brought justice to the women of Arabia and raised them to a level they had not seen before in their society, something which ancient civilizations have never done to their women.

When Muhammad(sallallahu Alayhi wasallam) first became the Prophet of Islam, the pagans of Arabia had inherited a disregard for women as had been passed down among their Jewish and Christian neighbours. So disgraceful was it considered among them to be blessed with a female child that they would go so far as to bury this baby alive in order to avoid the disgrace associated with female children.

“When news is brought to one of them of (the birth of) a female (child) his face darkens and he is filled with inward grief! With shame does he hide himself from his people because of the bad news he has had! Shall he retain it on (sufferance and) contempt or bury it in the dust? Ah! what an evil (choice) they decide on!”[13]

Through the teachings of Islam, Muhammad(sallallahu Alayhi wasallam) put a swift and resounding end to this evil practice. God tells us that on the Day of Judgment, the female child will be questioned for what crime she was killed.

“When the female (infant) buried alive is questioned – for what crime she was killed.”[14]

The Prophet(sallallahu Alayhi wasallam) said: ‘If anyone cares for three daughters, disciplines them, marries them, and does good by them, he will enter Paradise.'[15]

Abdullah the son of Abbas narrated that

The Prophet(sallallahu Alayhi wasallam) said: ‘If anyone has a female child, and does not bury her alive, or slight her, or prefer his male children over her, Allâh will bring him into Paradise.'[16]

‘Whoever maintains two girls till they attain maturity, he and I will come on the Day of Resurrection like this’; and he joined his fingers.

In other words, if one loves the Messenger of God(sallallahu Alayhi wasallam) and wishes to be with him on the day of resurrection in heaven, then they should do good by their daughters. This is certainly not the act of a “child molester”, as the missionaries would like us to believe.

Finally, we end this with a citation from the Holy Prophet(sallallahu Alayhi wasallam), who said

“I have come to defend the two oppressed peoples: women and orphans.”

A news article from The New Straits Times, Malaysia dated 10th of March, 2001 about a nine-year old girl living in northern Thailand giving birth to a baby girl. The fact that a nine-year old girl is mature enough to give birth proves the point above about girls reaching puberty earlier than men.

Below is a news article from The New Straits Times, Malaysia, dated 10th of March, 2001 about a nine-year old girl living in northern Thailand giving birth to a baby girl. The fact that a nine-year old girl is mature enough to give birth proves the point above about girls reaching puberty earlier than men. 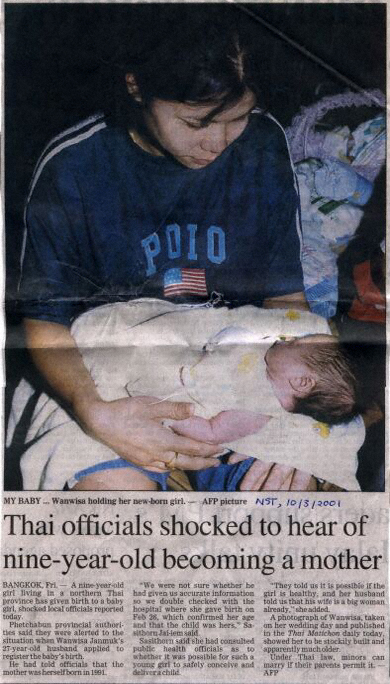 Should the husband of this young girl be accused of “child molestation”, as insinuated by the Christian missionaries?