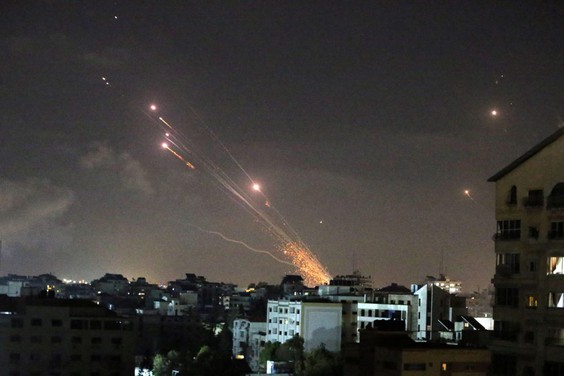 Continuing Nakba, continuing resistance It is not the role of supporters in the west to tell Palestinians how best to resist.

They are sick of the message from Western governments that Israeli state violence is condoned but not popular resistance; that Palestinians have no rights to self-defense unless bequeathed by the colonialist forces; and that Israel’s security is privileged above all other considerations.

By Marion Kaawas  via mondoweiss.net

Palestinian activists in diaspora and their supporters have been pushing for decades to bring the message of Palestine to the international community. We stood in 1982, on the same streets and plazas we gather in now, to condemn the Sabra and Shatila massacres; we stood in 2002 when Israel invaded Palestinian cities in the occupied West Bank; we stood in 2014 when Israel ravaged Gaza leaving thousands dead, including many civilians; we stood in 2018 during the Great Return March when Israeli snipers picked off protestors in Gaza, as if for sport.

And now here we stand again, with the hope that this time it will be different. That this time there is a qualitative change. That this time the world will not just return to “business as usual” after the immediate crisis is over. And there are indications that such a shift is now underway, with global support for Palestine increasing by the day with the barrier of Zionist lobby control being breached.

And that is long overdue because frankly, Palestinians are losing patience. They are fatigued with answering the same endless questions and with being asked to justify their right to resist against such a cruel settler-colonial oppression. They are weary of being lectured by well-meaning but misguided voices about how they should conduct their struggle and what tactics are acceptable.

They are sick of the message from Western governments that Israeli state violence is condoned but not popular resistance; that Palestinians have no rights to self-defense unless bequeathed by the colonialist forces; and that Israel’s security is privileged above all other considerations.

Lets unpack this anti-Palestinian expectation. Not only is it replete with North American and Western privilege, but it sends the message that others can dictate to the Palestinians what form of resistance best suits their needs at any given time. Palestinians have taught the world much about civil disobedience campaigns, from the six-month long General Strike of 1936 (one of the longest in the history of the world), to the Beit Sahour tax strike during the first intifada, to the Great Return March. But it is their collective and popular decision as to when to engage in armed resistance against foreign military occupation, a right recognized under international law and even honored in many other circumstances.

I will never forget an incident 20 years ago at a Vancouver-area church. There was an inspiring mural on the wall honoring armed female fighters in the anti-Nazi resistance in WW11. The irony was that I sat in a meeting in that same church where people expounded on the necessity (and even the benefits) of Palestinians only engaging in “non-violence”; sadly, they saw no contradiction between the two.

Many liberation movements were deemed “terrorist” by various oppressors and imperialist forces, from South Africa to Algeria. Parallels are often drawn between the anti-apartheid struggle in South Africa and the Palestinian experience, both in the context of how apartheid rule operates institutionally and how it demonizes resistance.

Solidarity groups can decide which specific campaigns they wish to promote, but they are not tasked with sanitizing the Palestinian struggle to appease Western prejudices.

With Israeli soldiers and settlers rampaging through Jerusalem, with a shoot-to-kill policy at Israeli checkpoints that has resulted in the murder of many Palestinians, with another rapacious attack on Gaza underway, it is not the role of supporters in Canada or the U.S. to tell Palestinians how best to resist. Instead, they should be honoring the legendary Palestinian fightback to Zionist colonization, that has been going on for almost a century. Solidarity groups can decide which specific campaigns they wish to promote and highlight based on their local circumstances, but they are not tasked with sanitizing the Palestinian struggle to appease Western prejudices.

It is the stubborn resistance of the Palestinian people and their refusal to accommodate the Zionist settler-colonialist project that have brought us thus far; it is the Palestinian spirit of sumoud that has delivered, albeit 72 years later, the B’tselem and Human Rights Watch reports that now acknowledge Israel is an apartheid state. This is the message of Nakba73 going forward…as the Nakba continues, so will Palestinian resistance.

There can never be, and will never be, co-existence with apartheid and settler-colonialism.