“Nothing could have adequately prepared me for what I encountered on the ground: Israeli apartheid.”

I was first introduced to the unjust suffering of the Palestinian people as a child in the 1980s by my Christian minister, who boldly dedicated her life to helping Palestinians in the Middle East and at the United Nations. Her mission was to make Westerners aware of their plight and rectify the erasure of Palestinian Christians.

At seven years old, I understood that to follow in the example of Jesus was to help the most oppressed – from South Africa to Palestine. Cradling the Palestinian handicrafts my minister brought back from Palestine in my small hands, my young heart ached to relieve their suffering, but I couldn’t grasp how a people could be refugees on their own land – and, frankly, I still can’t.

Though I was well-educated on Palestine in childhood and later at the Ivy League, I felt compelled in the spring of 2019 to travel to Palestine to see the reality for myself while researching Sufism. Nothing could have adequately prepared me for what I encountered on the ground: Israeli apartheid.

Apartheid roads, apartheid checkpoints, apartheid ID cards, apartheid walls, apartheid buses, apartheid courts – and in these pandemic days, apartheid vaccines. All of these, of course, are against international law. I contacted my family and friends with grave concern: “What have I gotten myself into – this place is a horror show.”

When I met with leading Palestinian psychologists to discuss mass trauma under apartheid and occupation, they said that Post-Traumatic Stress Disorder (PTSD) treatments are not useful in Palestine, since the trauma is not “post” but relentless and ongoing.

In Ramallah, my despair in witnessing the humiliating and sadistic cruelties of apartheid was transformed into a flicker of hope by an enormous six-metre bronze statue of President Nelson Mandela with his fist raised in the air – a recent solidarity gift from the South African people to the Palestinian people, which was held hostage by Israeli border guards for thirty days.

As far back as 1961 under apartheid, South Africa, the South African PM Hendrik Verwoerd, a proud architect of apartheid, declared: “Israel, like South Africa, is an apartheid state.” Israel supported the apartheid government of South Africa. As Mandela noted: “We know too well that our freedom is incomplete without the freedom of the Palestinians.”

This solidarity continues today – his grandson Mandla Mandela marched last month at a pro-Palestine protest in Cape Town. Elsewhere in Palestine, I came upon a Black Panthers memorial and a museum exhibit dedicated to George Jackson  – the struggle for Palestinian freedom has long been international and focused on racial justice.

Illegal military occupation is serious business, and I feared for my own life on more than one occasion. At an Israeli checkpoint in Hebron near the Ibrahimi Mosque, where Israeli terrorist Baruch Goldstein, an American immigrant to Israel, murdered 29 Palestinians in 1994, an Israeli soldier charged at me and placed his machine gun just inches from my body, shouting: “ARE YOU JEW? ARE YOU THE JEW?”

When I wouldn’t answer, he interrogated my colleagues to find out if I was Jewish or not – I guess for the crime of walking with a Palestinian activist. In the words of my Jewish trauma therapist: “It’s so painful that we are doing to others what was done to us.”

Jewish settlers in Hebron cursed at us, made rude gestures, and threatened to hit us with their cars, as we walked along streets covered with cage-like canopies erected by Palestinians to prevent settlers from throwing bottles of urine, feces, and garbage on them from the stolen balconies above. I spoke with a young Palestinian woman who had had her teeth knocked out by settlers while defending her home from them, and a man in his 70s who Israeli soldiers made strip to his underwear at a checkpoint. Israeli soldiers even tried to rough up our own guide, human rights activist Issa Amro, for showing us the town.

Waiting for hours at Israeli military checkpoints, as I learned firsthand, is intended to break the human spirit and induce fear. Even blind Palestinians are made to walk through the crowded checkpoints instead of staying on the bus. When Israeli soldiers stormed our bus – filled with all Palestinian women – to threaten our driver with their guns, we panicked they would shoot him dead.

In the words of South African anti-apartheid legend Desmond Tutu: “I have seen the humiliation of the Palestinians at checkpoints and roadblocks, suffering like us when young white police officers prevented us from moving about.” I felt sick with sorrow and disgust when my American friends and I had to smuggle our Palestinian colleague in the trunk of our van across Israeli checkpoints, as she is forbidden by Israel to travel freely like us from town to town on her own land.

On multiple Palestinian university campuses, gravestones commemorating Palestinian students murdered by Israel told me of the horrors of education under occupation before I even had a chance to speak with Palestinian professors and students. Israel’s assault on higher education is constant; Palestinian universities are attacked and closed, and professors and students are shot with live ammunition, detained without charge or trial, imprisoned, and murdered – even at Bethlehem University, which was jointly established by the Vatican and De La Salle Brothers.

At a lunch with Palestinian college students, I had the slow and upsetting realisation that many of them had been imprisoned as children multiple times. They were lucky to even be alive – in Aida refugee camp, I saw the names of all the children murdered by Israeli soldiers in the camp graffitied on the wall.

Prime Minister Benjamin Netanyahu has declared that Israel is “the nation-state of the Jewish people and only them.”  The 2018 Nation State basic law officially enshrined Jewish supremacy into law. This hateful disregard for other religions and ethnicities can be seen in the Israeli bullet marks wounding the marble sides of the Dome of the Rock, where Muslims were brutally attacked this Ramadan.

Christians in Palestine are no safer – at this year’s Holy Fire ceremony for Orthodox Easter, police arrested and assaulted Christians trying to enter the Church of the Holy Sepulchre. And at Christmas time, Palestinian Christians from Gaza are forbidden from leaving their open air prison to visit Jerusalem and Bethlehem.

The news of Naftali Bennett replacing Netanyahu as Prime Minister may matter for Jewish Israelis, but for Palestinians it will only mean a continuation of apartheid, occupation, and ethnic cleansing. Benjamin Gantz’s trip last week to DC to ask the US for an additional $1 billion for emergency military funding for Israel on top of the annual $3.8 billion dollars in military aid adds insult to injury in the wake of Israel’s illegal war last month on Gaza which killed 253 people, including 67 children, and wounded 2,000. Another 2,000 Palestinians have been arrested by Israeli police in the past few weeks and tens of thousands have been rendered homeless, as world leaders stand by and apartheid marches on.

I have never been a fan of the West’s hypocritical and chauvinistic human rights discourse which always leaves Palestine off the map. What is happening in Palestine goes beyond “human rights” – I do not have language for the catastrophic Israeli atrocities being committed against Palestinians with American tax dollars – money which should be going toward universal healthcare, education, and infrastructure at home instead. America’s “special” relationship with Israel poisons our political system, limits our civic discourse and freedoms, and creates disharmony throughout the world. We are all occupied – none of us are free until the Palestinians are.

There can be no tolerance for apartheid, illegal occupation, and appalling crimes against humanity in 2021. The time is now for people of conscience around the world to unite and put an end to Israel’s abhorrent and illegal actions and force Israel to comply with the UN-stipulated right of return for Palestinian refugees. To do so, we must boycott Israeli products, urge companies and institutions to divest from Israel, and agitate for our governments to put sanctions on Israel.

When we stand up for Palestine, we stand up for humanity and celebrate the goodness of our nature and the interdependence of our human family. Call it a moral imperative, a human duty, or a revolutionary act – we are all complicit in this carnage until we succeed in ending it.

Seeing my Christian, Muslim, and atheist Palestinian colleagues and friends – Arabs, Afro-Palestinians, Armenians – trapped on their own land behind Israeli checkpoints and apartheid walls traumatises me to this day, and yet in the midst of that unjust hell, we shared so many laughs and forged priceless memories.

May we all bravely embody the indomitable spirit of the Palestinian people in our quest to help them get free. Together, let us build a road out of the ruins to freedom – for the Palestinians and the world. 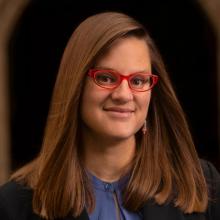 Dr. Emily Jane O’Dell is an Associate Professor at Sichuan University-Pittsburgh Institute in the People’s Republic of China and an editor of SHARIAsource at Harvard Law School. She has been a Resident Fellow in Islamic Law in the Abdallah S. Kamel Center for the Study of Islamic Law and Civilization at Yale Law School and spent over half a decade teaching in the Middle East at the American University of Beirut as the Whittlesey Chair of History and Archaeology and at Sultan Qaboos University in the Sultanate of Oman.

Stateside she has taught at Columbia University, Brown University, and Harvard University — where she received an award for excellence in teaching. She received her BA, MFA, MA and PhD from Brown and a Masters in Russian, Eastern European, and Central Asian Studies from Columbia.

She completed her Postdoctoral Fellowship at Harvard University in the Humanities Center and the Department of Near Eastern Languages and Civilizations under the direction of postcolonial theorist Professor Homi Bhabha.  As a Research Fellow for the Islamopedia Initiative at Harvard, Emily collected fatwas from around the world in multiple languages.  In addition to having taught Islam stateside and abroad in Beirut, she has also had the rare experience of speaking on Islamic affairs at the Iranian Ministry of Foreign Affairs and the Muftiate of Turkey.

In addition to her academic publications, her writing has appeared in The New York Times, Al Jazeera, NPR, Salon, Christian Science Monitor, Huffington Post, Counterpunch and Jadaliyya, and she is a global mentor for the Coalition for Women in Journalism.

She regularly performs Javanese gamelan music in concert at Lincoln Center, Asia Society, and with the masters in Java. She also does advocacy work in the Middle East with child refugees, young people with mental illness, and people with disabilities. She has been a guest speaker for Harvard, Columbia, and the Commonwealth Club in the Islamic Republic of Iran, East Africa, India, Central Asia, and the Caucasus.