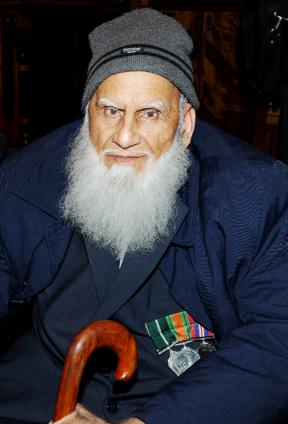 TRIBUTES have been paid to a war veteran who played a vital role in helping to build bridges between Asian soldiers and Blackburn schoolchildren.

Fazal Hussain, who died at the age of 95, had served with the Royal Army Medical Corps in the Middle East during the Second World War.

He was one of several Asian former troopers who worked closely with Blackburn Museum and later Beardwood and St Bede’s high schools on community cohesion initiatives.

Each year Fazal, who lived in the Randal Street area, and his comrades would take part in Blackburn’s remembrance service but it was often felt that their role in the conflict had been overlooked.

So they were able to share their experiences with teenagers, relating the horrors of war and explaining how a huge volunteer army from India assisted the Allied war effort. Later the successful scheme was widened to bring together youngsters and veterans from Blackburn, Cumbria and Greater Manchester.

Mubashar Khalid, a volunteer recruitment and training manager at Blackburn Youth Zone, said: “He was a symbol of of cohesion, citizenship and dedication. I think the whole community can learn a lot from him.

“He truly was a legend, full of life experience and wisdom.”

His funeral took place on Thursday and it is understood his body has been flown to Pakistan for burial.

Coun Mohammed Khan, who represents Wensley Fold ward, said: “He was a true gentleman and did so much important work in the community. He was very well-respected and special.”