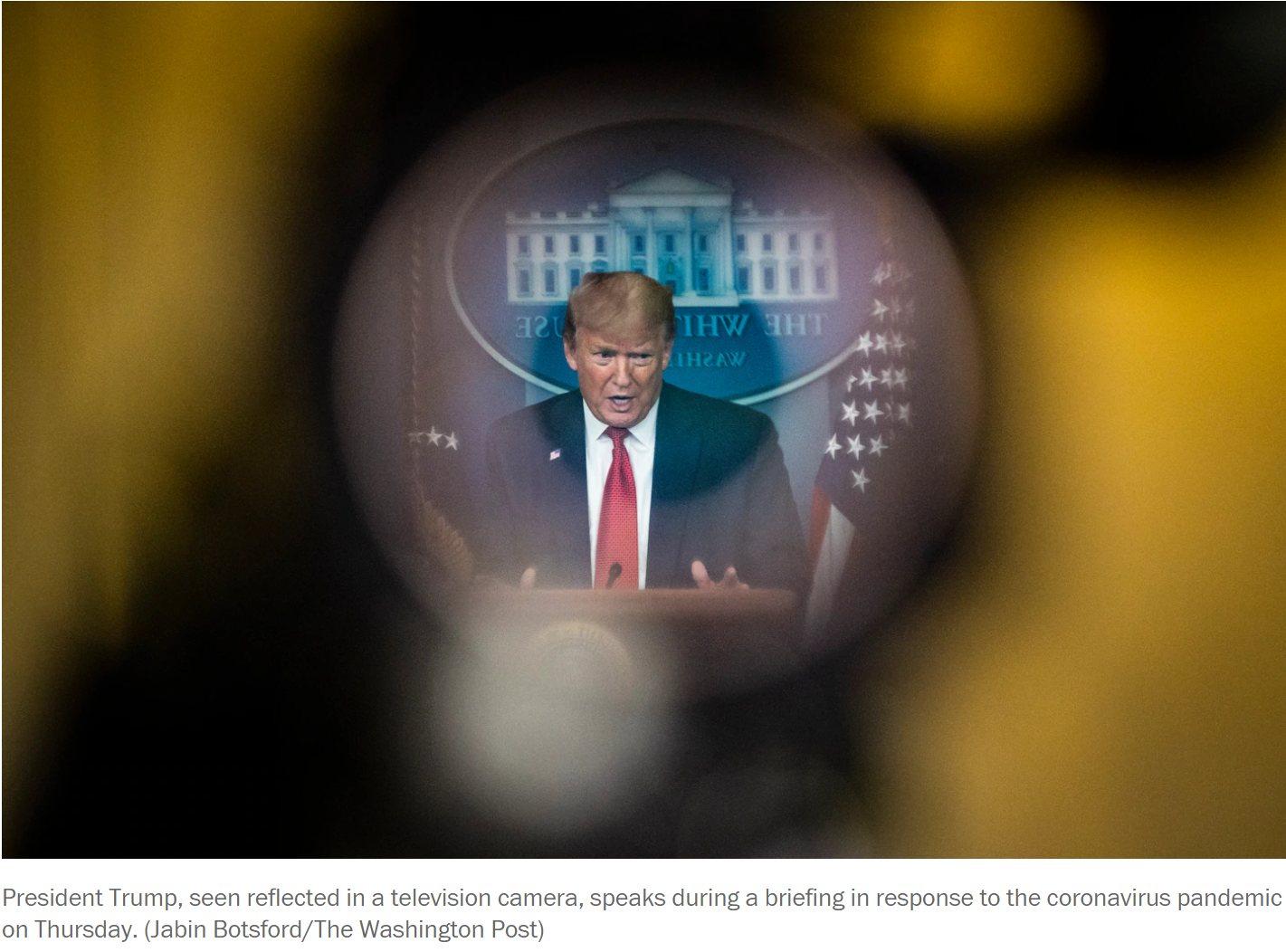 “It would have been so easy to be truthful.”

Thus spake President Trump this week on the very day he surpassed the milestone of uttering 18,000 falsehoods during his presidency, as tallied by the Post’s Fact Checker.

But on this day, Trump was not admitting to losing his own struggle with the truth. He was accusing the World Health Organization of “covering up the spread of the coronavirus” and failing to “share information in a timely and transparent fashion.” He declared he was cutting off funding for the world’s public health body in the middle of a pandemic.

The next day he called the WHO a “tool of China” and floated the vile conspiracy theory that the WHO deliberately concealed the danger of the virus: “There’s something going on” at the WHO “that’s very bad,” and “I have a feeling they knew exactly what was going on.”

This is not merely a falsehood. This is a damnable and murderous lie.

As Trump surely knows, and as I have learned from people with knowledge of the situation who spoke to me on the condition of confidentiality, 15 officials from his administration were embedded with the WHO in Geneva, working full time, hand-in-glove with the organization on the virus from the very first day China disclosed the outbreak to the world, Dec. 31. At least six other U.S. officials at WHO headquarters dedicated most of their time to the virus, and two others worked remotely with the WHO on covid-19 full time. In the weeks that followed, they and other U.S. government scientists engaged in all major deliberations and decisions at the WHO on the novel coronavirus, had access to all information, and contributed significantly to the world body’s conclusions and recommendations.

Everything that the WHO knew, the Trump administration knew — in real time. As congressional investigators who requested WHO documents and communications are now learning, senior Trump administration officials — Health and Human Services Secretary Alex Azar; the Centers for Disease Control and Prevention’s Robert R. Redfield Jr., Anne Schuchat, Ray R. Arthur and Jeffrey McFarland; the National Institutes of Health’s Anthony S. Fauci and H. Clifford Lane, and many others — consulted with the WHO throughout the crisis.

Trump came to power on the basis of smears — against opponents, immigrants and minorities. Now he prepares to center his reelection campaign on demonizing China, even though he repeatedly praised China’s response to the virus, specifically that of his “very, very good friend,” Chinese President Xi Jinping. Key to this attack is making a scapegoat of the WHO, which fits his usual criteria because, like the U.N. and the World Trade Organization, it is an international entity (globalists!) run by a foreigner, Ethiopia’s Tedros Adhanom Ghebreyesus.

But this smear is particularly deadly. As the virus bears down on less-developed countries in sub-Saharan Africa, Central and South America, and South and Southeast Asia, the WHO has had to divert attention from the pandemic to defend itself against Trump’s smear and the loss of its top funding source, the United States. Thousands of Americans are dying needlessly because of Trump’s dithering. How many more around the world will die because of his scapegoating of the WHO for his own failures?

Almost immediately after China disclosed the outbreak, I’m told, 15 CDC officials at the WHO headquarters began working on covid-19 and other U.S. officials there were reassigned to the outbreak from their work on Ebola. U.S. officials participated in person in the twice-daily meetings of the WHO’s emergencies division. In addition to top-level conversations involving Redfield and Fauci, which would be expected, other Trump administration scientists were in all “incident-management” meetings and participated in the WHO’s pandemic “expert network.” They participated in a teleconference between top WHO officials in Geneva and the WHO’s regional and national offices. When the WHO formed its “emergency committee” in January to fight the virus, Martin Cetron, the CDC’s head of quarantine and global migration, was on it. Schuchat, the CDC’s No. 2 official, and Lane, a Fauci deputy, were on the WHO’s “Strategic and Technical Advisory Group for Infectious Hazards.” Others worked with the WHO group coordinating research on therapeutics, diagnostics and vaccines. This is as it should be: The CDC and NIH experts did their job. It’s Trump who didn’t.

Now Trump would blame the WHO for failing to sound alarms about the virus, even though the CDC had an office of 14 people in China “to contain infectious disease outbreaks before they spread globally.” And he would blame the WHO for failing “to call out China’s lack of transparency” — even though, on Jan. 24, he tweeted: “China has been working very hard to contain the Coronavirus. The United States greatly appreciates their efforts and transparency. It will all work out well. In particular, on behalf of the American People, I want to thank President Xi!”

Trump has decided that reelection requires him to attack the World Health Organization at the height of a pandemic. Multitudes could die for his lie.