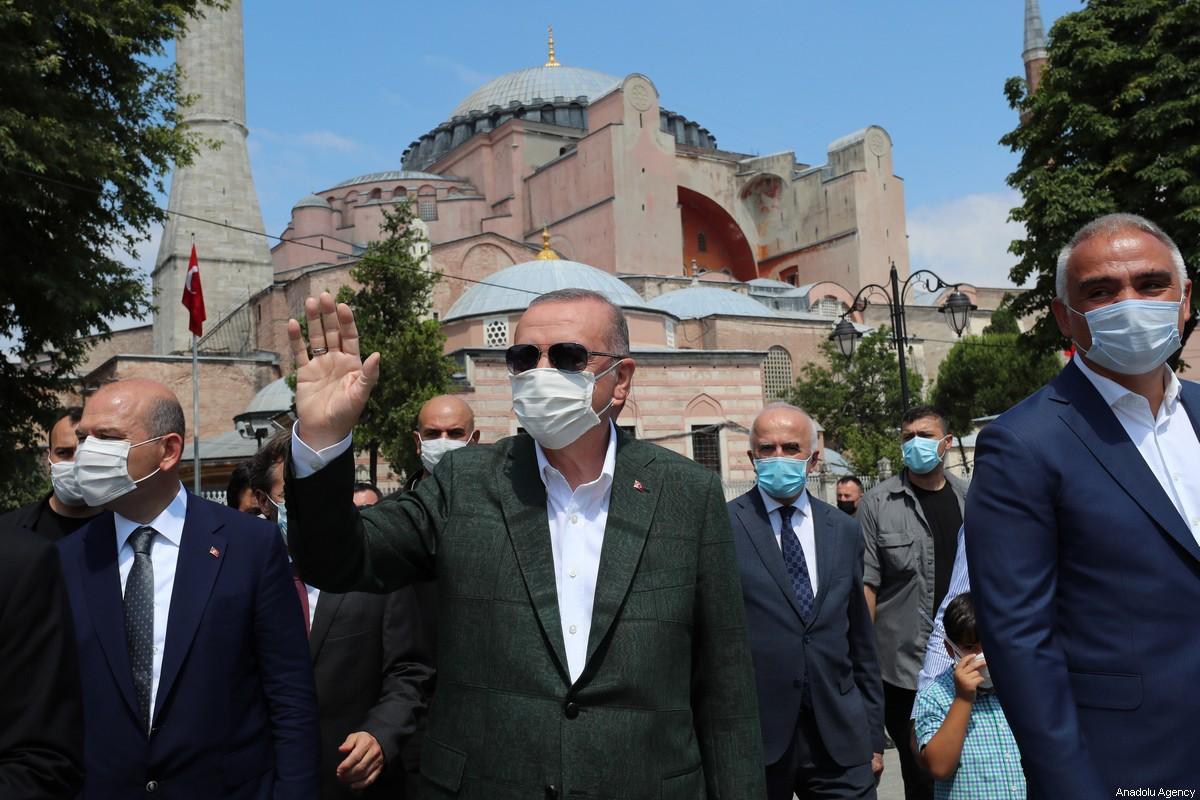 President of Turkey Recep Tayyip Erdogan (C) salutes public after a visit to inspect Hagia Sophia Mosque which will be opened on 24th of July for worship after 86 years with Friday prayer, in Istanbul, Turkey on 19 July 2020.

The Hagia Sofia Grand Mosque was opened for public worship last Friday for the first time in 86 years following a top court’s ruling that the historic building, originally a church, had been converted into a museum illegally by the founder of modern Turkey’s secular state. I had expected a favourable result before the landmark ruling was officially announced earlier this month and decided to witness the historic event unfold.

The last time I visited the Hagia Sophia was about 10 years ago when it was a museum. This time, approximately 350,000 people joined me, most of them within the vicinity of the mosque, while about 1,000 prayed inside. The congregation included President Recep Tayyip Erdogan, who was greeted with resounding applause as he was shown entering the mosque on a large outdoor screen. I managed to enter the mosque myself a couple days later, as it was open to visitors, both Muslim and non-Muslim alike.

While the wearing of facemasks was mandatory due to the coronavirus pandemic, social distancing at the momentous event last Friday was practically non-existent; this was unsurprising given the sheer number of people there, including many foreigners like myself. It is safe to say that for the first time in many a long year, Istanbul’s iconic Blue Mosque was overshadowed by the neighbouring building, upon which all Ottoman era mosques were modelled.

The reversion of the Hagia Sophia to a mosque, a role it fulfilled for almost five hundred years, is the latest development as Erdogan reasserts Turkey’s status as a regional power. Some believe it is an attempt to establish a neo-Ottoman empire, while turning away from the West and the legacy of Mustafa Kemal Ataturk who founded the secular Turkish Republic following the fall of the Ottoman Empire in 1923. On 24 July of that year, the Treaty of Lausanne resulted in the Western powers and their allies recognising modern Turkey’s borders. Hagia Sophia Grand Mosque’s re-opening was the 97th anniversary of the treaty’s signing.

The reversion of the Hagia Sophia to a mosque, a role it fulfilled for almost five hundred years, is the latest development as Erdogan reasserts Turkey’s status as a regional power. Some believe it is an attempt to establish a neo-Ottoman empire, while turning away from the West and the legacy of Mustafa Kemal Ataturk who founded the secular Turkish Republic following the fall of the Ottoman Empire in 1923. On 24 July of that year, the Treaty of Lausanne resulted in the Western powers and their allies recognising modern Turkey’s borders. Hagia Sophia Grand Mosque’s re-opening was the 97th anniversary of the treaty’s signing.

Such no doubt deliberate symbolism also permeated last Friday’s sermon. The head of Turkey’s highest religious authority, the Diyanet, Ali Erbas carried an Ottoman sword as he ascended the pulpit instead of the more commonly used wooden staff. Imam Erbas later explained his use of a sword to journalists: “This is a tradition in mosques that are a symbol of conquest. For 481 years without interruption, [imams] went with a sword [to the minbar]. Insha’Allah [God Willing], we will continue this tradition from now on.”

In the build up to the sermon, the Qur’an was recited, as were salutations towards Prophet Muhammad (peace be upon him), his family and companions, reminiscent of a popular nasheed from the early 2000s by Sami Yusuf. As they echoed melodiously both inside and outside the mosque, it struck me that this would never happen in Saudi Arabia, where a puritanical interpretation of Sunni Islam, often referred to as Wahhabism, is the state religion and practices deemed to be “innovations” are shunned.

The Saudis fought against the Ottomans and have been vying for leadership of the Sunni Islamic world ever since the creation of the Kingdom of Saudi Arabia in 1932. The Ottoman interpretation of Islam was on the other end of the religious spectrum, with Sufism playing a big role in Ottoman society, despite a conservative religious establishment.

Over these few days in Turkey I got the impression that the 300-year struggle for the leadership of Sunni Islam appears to be edging back in Turkey’s favour, with the Hagia Sophia move being the latest projection of Ankara’s soft power. It was as if last Friday’s sermon announced Turkey as a serious leadership contender, as fractured as Sunni Islam may be. While Riyadh’s devastating five-year war on Yemen has tarnished its image among Muslims, Ankara’s military interventions in Syria and Libya appear to have the support of many in non-Turkish Muslim circles.

Of course, the neo-Ottoman rhetoric is exaggerated and a form of propaganda against Turkey. The Saudi-owned Arab News published a series of articles recently about Turkey “repeating” Ottoman crimes against Arabs, disputing pre-Ottoman historical claims and accusing Turkey of trying to gain the support of Muslims of different nationalities as it seeks to restore its power and authority.

This might not be as alarmist as it first seems. A pro-government news magazine in Turkey, Gercek Hayat, divided opinion after the Hagia Sophia move with a controversial front cover depicting a red Ottoman flag and suggested that it is time for the return of the caliphate.

According to a survey fielded by the Washington Post last year, though, the majority of Turkish citizens who responded were in favour of the abolition of the Ottoman Empire and against its re-establishment.

However, such pan-Islamist ideas of a revival of the caliphate transcend borders, and it is true to say that some of the biggest supporters of reviving the Ottoman caliphate are not Turks at all, but live in parts of Asia with some of the largest Muslim populations. This is not unprecedented, as some of the earliest calls to maintain the caliphate came from the Indian sub-continent, with the emergence of the Khilafat movement (1919-1924).

Critics of Turkey’s credentials for the leadership of the Sunni Islamic world may rely on both political and religious arguments, such as Turkey’s membership of NATO and its diplomatic and trade links with Israel, in spite of its anti-Zionist rhetoric. There is also a mainstream opinion that a caliph must come from the Makkan tribe of the Quraysh, and that the Ottomans were not, therefore, rightful caliphs because they weren’t even Arab never mind Qurayshi. Arguably the last caliphate was the Abbasids which ended in 1258 CE, with the Mongol sacking of Baghdad, by which time they were just figureheads with no real power.

The existence of the Safavid Empire of Iran, which at varying times clashed and coexisted with the Ottomans, also illustrates the fact that the political authority of the Ottomans did not reach all Muslims. Iran today has its own regional ambitions and sees itself as a leader of the Shia world, which, like Sunni Islam, is not monolithic.

I was reminded of these differences during my stay in Istanbul when I visited a Shia neighbourhood with a large Azeri community and spoke to a couple of locals about the Hagia Sophia becoming a mosque again. They were not too impressed and instead spoke of the religious sites in Karbala and Najaf as worthier places to visit.

Returning to the question of leadership of the Sunni world, though, it is clear that Turkey’s use of both soft and hard power has helped to reposition itself in its former role, even if in not quite the same manner. Ironically, while Turkey is re-establishing ties with its Ottoman past, Saudi Arabia has already eradicated most of its heritage, including that from the Ottoman era, and is finding it increasingly difficult to justify its own self-appointed role to be a convincing leader of the world’s majority Sunni population in religious and political matters.