CAIRO – Unlike former elegant, half-British first ladies, Egypt’s presidential palace is welcoming a small-town home-maker who loves to be called with a traditional nickname identifying her as the mother of her eldest son.

Unlike her predecessors, Suzanne Mubarak and Jihan el-Sadat, aloof, half British fashion plates with well-coiffed hair and advanced degrees, she did not attend college and never took her husband’s last name.Seen as looking like most Egyptian women, Egypt’s new first lady, Naglaa Ali Mahmoud, wears a headscarf. 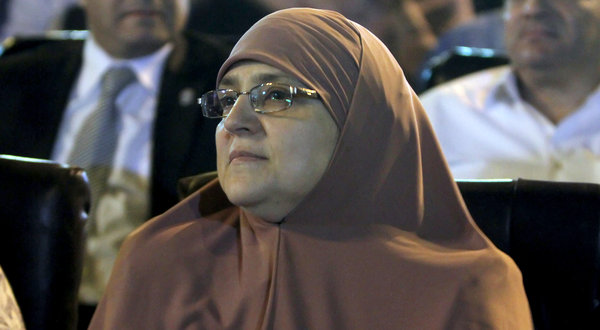 She even refuses to take the title of “First Lady”, preferring instead to be called “Um Ahmed”, a traditional nickname that identifies her as the mother of her eldest son.

“People like Suzanne Mubarak are the odd ones out — you don’t see them walking down the street,” said Mariam Morad, 20, a psychology student.

“This is exactly what we need: change.”

The beginning of Egypt’s new first lady was very typical of many Egyptians.

She grew up in the poor Cairo neighborhood of Ain Shams and married her husband, Morsi, when she was 17 and still in high school.

Morsi himself had grown up poor in the village of El-Adwa in the Nile Delta province of Sharqiya, but excelled in the engineering program at Cairo University.

Three days of their wedding, Morsi left for Los Angeles to complete his Ph.D. at the University of Southern California.

Mahmoud joined her husband in Los Angeles a year and a half later, where she volunteered at the Muslim Student House, translating sermons for women willing to revert to Islam.

In Los Angeles, they got the first two of their five children, who hold American citizenship.

Completing his degree, Morsi decided to return to Egypt to have his children grown up there.

In Egypt, Morsi taught engineering at Zagazig University, while his wife, a homemaker, became an instructor in the Brotherhood’s parallel women’s auxiliary, teaching young girls about marriage.

But some Egyptians opine that the new first lady is unfit for the position.

“I can’t call her a first lady under any circumstances,” said Ahmed Salah, 29, a banker having coffee with his friends on the Nile island of Zamalek.

“She can’t be an image for the ‘ladies’ of Egypt.”

Debates have also raged in Egyptian newspapers and social networks about the image of Egypt’s new first lady.

“How could she receive world leaders and still adhere to her traditional Islamic standards of modesty? “Don’t look at her. Don’t shake hands with her,” El-Fagr newspaper asked in a column, calling it a “comic scenario.”

Noran Noaman, 21, an engineering student, also fumes at the image of the new first lady.

“If you travel to New York or wherever, people would make fun of you and say: ‘Your first lady wears the abaya,” she said.

But this argument is rejected by many Egyptians, who see Morsi and his wife as an example on the major changes in Egypt following the revolution.

“They’re people like us,” Saber, the engineering lecturer, said.

“It is a strange relief to people. The people feel that there’s a change.”

In Egyptian culture, men rarely talk about their wives publically and mentioning their name is almost a taboo.

But Morsi, who will be sworn in on Saturday, June 30, is unusually appreciative of his wife.

He once said in a television interview that marrying her was “the biggest personal achievement of my life.”

Mahmoud remembers that her husband sometimes helped her with chores and even cooked for her.

“I like everything about him,” she told the magazine Nesf el-Donia.

“Our fights never lasted for more than a few minutes.”

Now, it is only about a few days before Morsi and his wife move from their home to the presidential palace.

“All I want is to live in a simple place where I can perform my duties as a wife,” she said.

“A place like the presidential palace completely isolates you from the world people live in, and going too far hardens the heart.”