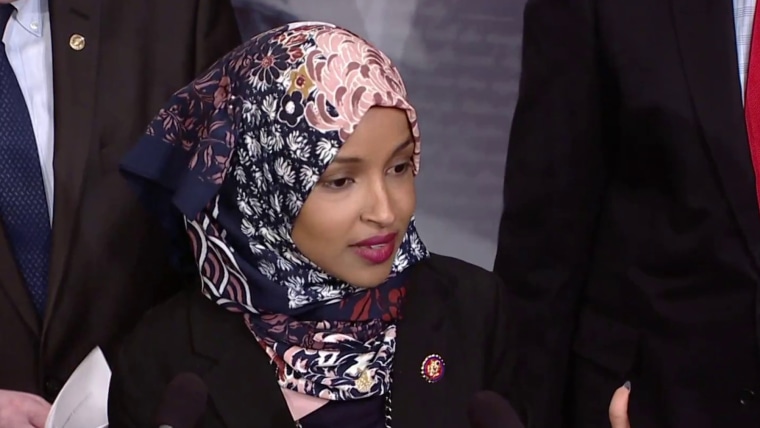 Rep. Ilhan Omar, D-Minn., asked a question of the secretary of state this week about international law and justice. Since then, she has been the subject of bad faith scorn from her fellow Democrats and threatened with pariah status by Republicans.

Let me say this up front and in no uncertain terms: Ilhan Omar was right. Any headline you see that says otherwise — that her comments this week were antisemitic or promoted hate toward Israel, that she sympathized with or gave cover to terrorists — is accepting a bad faith attack as a truth.

The ICC has been working on two investigations that have stirred a lot of controversy in the U.S. First, the ICC’s chief prosecutor has been looking into potential war crimes in Afghanistan, which has ratified the Rome Statute, including those alleged to have been committed by members of both the U.S. military and the Taliban. Second, it announced in February that it would investigate whether Israel and Hamas have committed war crimes in the West Bank, East Jerusalem and the Gaza Strip.

The Biden administration opposes both of these investigations, which is what prompted Omar’s question to Secretary of State Antony Blinken on Monday during a hearing of the House Committee on Foreign Affairs:

I haven’t seen any evidence in either case that domestic courts can and will prosecute alleged war crimes and crimes against humanity. And I would emphasize that in Israel and Palestine that this includes crimes committed both by the Israeli security forces and Hamas. In Afghanistan, it includes crimes committed by the Afghan national government and the Taliban. In both of these cases, if courts can’t or won’t pursue justice and we oppose the ICC, where do we think the victims of these supposed crimes can go for justice? And what justice mechanisms do you support for them?

This is, in my view, an entirely valid question to ask America’s top diplomat about the U.S.’s foreign policy. Omar wanted to know what Blinken recommends to alleged victims of war crimes when the domestic courts are unable to provide justice. Blinken responded fairly, saying that the U.S. can’t support the ICC’s reaching beyond its jurisdiction and that he believes both America and Israel have the mechanisms to handle the cases. He also noted that Palestine is, in the eyes of the U.S., not a state and has no right to petition the ICC.

That’s a normal policy disagreement between an administration official and a member of Congress. What happened next was absolutely not normal — or, at least, it shouldn’t be. Omar shared a video of the exchange on Twitter with the caption: “We must have the same level of accountability and justice for all victims of crimes against humanity. We have seen unthinkable atrocities committed by the U.S., Hamas, Israel, Afghanistan, and the Taliban. I asked @SecBlinken where people are supposed to go for justice.”

We must have the same level of accountability and justice for all victims of crimes against humanity.

We have seen unthinkable atrocities committed by the U.S., Hamas, Israel, Afghanistan, and the Taliban.

I asked @SecBlinken where people are supposed to go for justice. pic.twitter.com/tUtxW5cIow

That tweet became fodder for Republicans to attack Omar — again, as they have repeatedly attacked her since she was elected — calling her antisemitic and anti-American. Punchbowl News’ Jake Sherman tweeted that there would likely be “GOP action” on the House floor, “perhaps a censure, perhaps some bill to try to strip Omar of her committee assignments.” Among the worst sentiments came from Sen. Tom Cotton, R-Ark., who all but told Omar to go back where she came from:

.@Ilhan was a refugee from Somalia and America welcomed her. If she really believes America is a hateful country on par with the Taliban and Hamas, she's welcome to leave. https://t.co/Hji2eEy5zt

Omar’s tweet also drew fire from Democrats in the House. On Wednesday evening, a dozen Jewish members of the caucus called on Omar in a statement “to clarify her words placing the U.S. and Israel in the same category as Hamas and the Taliban.” Their statement continued:

Ignoring the differences between democracies governed by the rule of law and contemptible organizations that engage in terrorism at best discredits one’s intended argument and at worst reflects deep-seated prejudice. The United States and Israel are imperfect and, like all democracies, at times deserving of critique, but false equivalencies give cover to terrorist groups.

By Thursday morning, Omar had issued a statement to clarify her tweet:

“To be clear: the conversation was about accountability for specific incidents regarding those ICC cases, not a moral comparison between Hamas and the Taliban and the U.S. and Israel.

“I was in no way equating terrorist organizations with democratic countries with well-established judicial systems.”

That seemed to do the trick for at least one of the signers of the letter Wednesday night. But the House Democratic leadership still felt the need to put out a joint statement Thursday afternoon saying promoting false equivalencies “between democracies like the U.S. and Israel and groups that engage in terrorism like Hamas and the Taliban foments prejudice and undermines progress toward a future of peace and security for all.”

Now, this whole thing should, in theory, be put to bed as far as the Democrats are concerned. But I just want to repeat what I said earlier: Omar was well within her rights when she questioned Blinken, even before her clarification. What she said and tweeted was basically the opposite of the “what-aboutism” that seeks to absolve one side by pointing out the other’s flaws. Omar asked for the same level of accountability to be upheld on all sides, leaving no war crimes unavenged.

In reality, war crimes are likely to have been committed in prosecuting the war in Afghanistan, especially given the drone killings that have gone uninvestigated over the last decade and a half. Israeli treatment of Palestinians in the occupied territories is, likewise, absolutely worthy of investigation. At present, there are no mechanisms in Afghanistan that would easily allow for any U.S. service member accused of crimes against humanity to be tried, nor is there much hope that Hamas in Gaza would prosecute any of its members for targeting civilians in Israel. The whole idea behind the ICC is that sometimes there are crimes that are too big, too atrocious to be handled effectively at the state level. The court is there to handle those cases in a way that can provide accountability when it might not otherwise exist.

As Omar tweeted in February: “If the US doesn’t support the International Criminal Court’s investigations into alleged war crimes, where should people go for recourse? When we try to block peaceful means of pursuing justice, it undermines any claims of credibility we have on human rights.”

Hayes Brown is a writer and editor for MSNBC Daily, where he helps frame the news of the day for readers. He was previously at BuzzFeed News and holds a degree in international relations from Michigan State University.