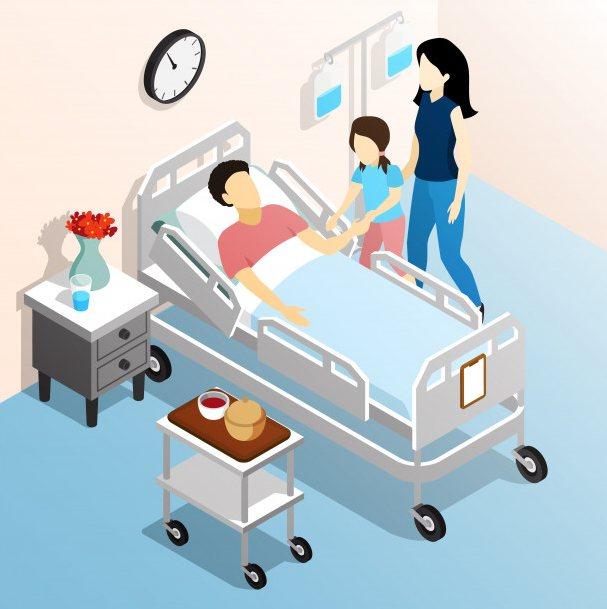 Visiting the sick is an act of great merit and is included in the human rights enunciated by the exalted Prophet صلى الله عليه وسلم. Some jurists regard it wajib, but in fact it is a sunnah.

“when a Muslim visits his sick brother in faith, he is all the time in the garden of Paradise.”

The Prophet صلى الله عليه وسلم  hearing of sickness of anyone among his acquaintances, went to visit them.

The correct way of visiting the sick is to put one’s hand on the sick man’s forehead and inquire after his illness, but only if putting the hand on his forehead does not cause the sick one pain otherwise it is sufficient to ask how he was.

Our Prophet صلى الله عليه وسلم  has taught us the following prays which is to be recited seven times when visiting the sick:-

‘I ask Allah the Immense, the Lord of the Immense Throne, to heal you,’

Ibn ‘Abbas (رضي الله عنه) reported that the Prophet (Allah bless him and give him peace) said,

“Anyone who visits a sick person whose time has not yet come and says seven times in his presence, ‘I ask Allah the Immense, the Lord of the Immense Throne, to heal you,’ Allah will heal him of that illness.”

It is narrated that A’isha (peace and blessings be upon her) said that when anyone among them had an illness, the Prophet (ﷺ) used to rub the area of the pain and recite the following du’a:

(O Allah take away the hardship, O Lord of mankind, give shifa, You are the One who cures, there is no cure except Your shifa, a cure that will not leave any sickness)

Don’t worry it is for Purification Allah willing

It would also be recommended to rub the area with one’s right hand — whether the sick person is oneself, or another. [Nawawi, Sharh Sahih Muslim]

It should be remembered that the visitors’ actions should never cause the slightest trouble or pain to the sick and this has been emphasized more than visiting the sick. A visit that pains or troubles the sick would be a sin rather than an act of merit.

Thus if visitors are not allowed to see the patient, they must not visit; in such a case mere asking and praying for the patient becomes an act of merit. There is no need to have one’s visit reported to the sick man. But if it is intended to please the patient then the names of the visitors may be told to him at some appropriate time.

Hadith has also emphasized that visitors must not stay very long with the sick man because it might harm the patient. However, if the patient wants someone intimate to stay with him then there is no harm in staying long.

It is also necessary to choose the right time for the visit; it is not right to visit a patient when he is resting or is otherwise engaged. Hence it is better to find out beforehand the appropriate time for a visit.