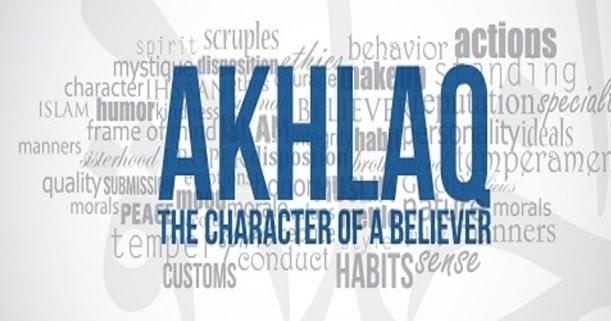 The literal meaning of the word khuluq is “one’s
innate nature and habit”. And according to the
‛ulamā’, as defined by Imām Ghazzālī, khuluq refers
to a condition which is firmly embedded in the self,
and from which actions issue forth with ease and
spontaneity, without any need to think and ponder
over them.

Akhlāq can also be defined as follows: It is a
conglomeration of such internal capabilities and
attributes which have become firmly embedded in
the self, through whose light and criterion, a person
may consider an action to be good or bad. Based on
this criterion, he will either carry out that action or
abstain from it.

The position of akhlāq in Islam

Character enjoys a laudable position in Islam, and
this is manifested in various ways. We list some of
these ways below:

right of character and the proliferation of noble
characteristics. As stated in a Hadīth:

(2) Dīn has been defined as good character as
mentioned in a Hadīth: A Sahābī came to
Rasūlullāh sallallāhu ‛alayhi wa sallam and asked:

“What is Dīn?” He replied: “Good character.”

(The essential pillar of hajj is to spend some time in ‛Arafāt
on the 9th of Dhū al-Hijjah. This is known as wuqūf. Hajj is
not valid without it.)

The position of character in Dīn is the same as
wuqūf at ‛Arafāt in hajj. Rasūlullāh sallallāhu
‛alayhi wa sallam said in this regard:

In other words, the most essential pillar of hajj
without which hajj will not be valid is the wuqūf at
‛Arafāt.

(3) Good character is the thing which will be
weightiest on the scale on the day of Resurrection.
A Hadīth states that Rasūlullāh sallallāhu ‛alayhi
wa sallam said:

“The fear of Allāh ta‛ālā and good character will be the weightiest of all the things
which will be placed on the scale on the day of Resurrection.”

(4) Some believers surpass others in different
aspects. Those who will surpass all as regards the
level of īmān will be the ones whose character is the
best.

“Which believer is the most superior as regards īmān?”

“The one who has the best character.”

(5) Enjoying the love and close proximity of
Rasūlullāh sallallāhu ‛alayhi wa sallam on the day
of Resurrection will be for those believers whose
character was the best. Their position as regards
this love and proximity will surpass the position of
others.

“The one who will be most beloved
to me, and closest to me on the day of Resurrection
shall be the one whose character is the best.”

(6) The acquisition of good character is so
important that it is essential for salvation from the
Hell-fire and entry into Paradise. If there is any
defect in this prerequisite, there is no other deed –
even salāh and fasting – which could make up for
it.

“There is a certain
woman who keeps fast by day and spends the night
in optional salāh, but she is of bad character.”

“There is no good in her. She is among the inmates of Hell.”

“O Allāh! Beautify my character and steer me towards good
character.”

He made this du‛ā’ despite possessing the best character.

He used to make the following du‛ā’:

O Allāh! Guide me towards best character because
none besides You can guide towards it. Ward off evil
character from me because none except You can
ward it off from me.

Obviously, Rasūlullāh sallallāhu ‛alayhi wa sallam
will only make du‛ā’ for something which is liked by
Allāh ta‛ālā and would bring a person closer to
Him.

Allāh ta‛ālā will only praise him for something
which is really great. This clearly shows the lofty
rank of character in Islam.

(9) There are many verses in the Qur’ān on the
subject of good character. They either instruct us to
adopt good character or praise those who have good
character. Together with praising them, Allāh ta‛ālā
mentions the reward that is in store for them. The
Qur’ān also instructs us to abstain from bad
character, and speaks about the ignobility of those
of bad character. Together with disparaging them,
Allāh ta‛ālā mentions the punishment which is in
store for them.

Undoubtedly, this large number of verses related to
the theme of character clearly demonstrates its
importance. Verses making reference to character
were revealed in Makkah – before the emigration –
and also in Madīnah, after the emigration. This
increases the importance of good character even
more. It shows that it is something which no
Muslim can do without, and consideration of it is
essential on every Muslim.