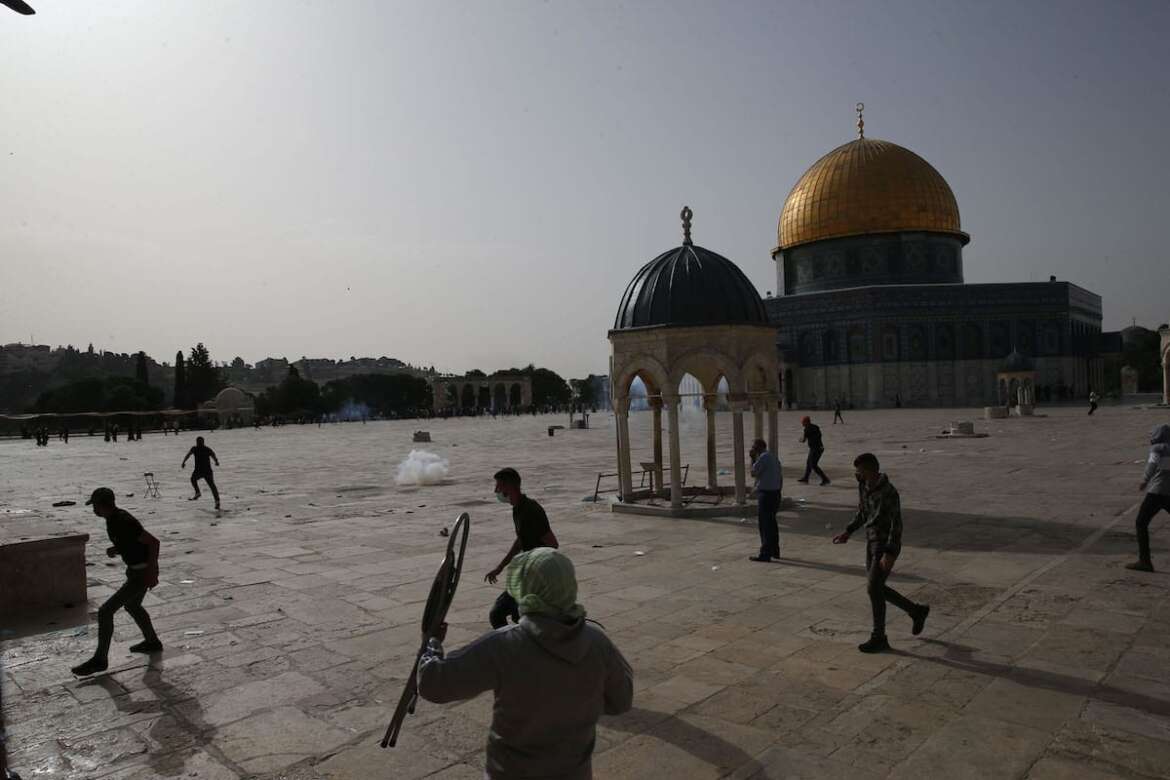 (above image: Israeli police intervene in Palestinians, who were standing guard to prevent fanatic Jews to raid the Masjid al-Aqsa Compound, in East Jerusalem on May 10, 2021)

Rhetoric about international intervention is an excuse for risking nothing, while Palestinians risk their lives

by Ramona Wadi  May 11, 2021 via middleeastmonitor.com

Ramona Wadi is an independent researcher, freelance journalist, book reviewer and blogger. Her writing covers a range of themes in relation to Palestine, Chile and Latin America.

The international community is quite happy to keep up the narrative of the “barren land” until Israel’s colonial violence escalates to attract global attraction and condemnation. When this happens, the UN rediscovers the existence of the colonised Palestinian population, albeit while feigning ignorance about its own role in maintaining the colonial state and settler violence. If we depart from the premise that the UN exists to fail in its mandate to protect human rights, then its political stance is to be both expected and abhorred.

When the Palestinian Authority emulates a similar stance in terms of recognising the perils that the people of occupied Palestine face when it makes news headlines, it is horrific.

“Storming Al-Aqsa Mosque is a crime committed by the occupation,” tweeted the PA’s Civil Affairs Minister, Hussein Al-Sheikh. “The Palestinian leadership is examining all options to respond to this heinous aggression against the holy sites and the citizens.” Wafa news agency, which is the PA’s media arm, ran the brief news report akin to an official statement.

Meanwhile, Wafa‘s reports on PA leader Mahmoud Abbas’s statements show how abysmal the Palestinian leadership is. Abbas holds the Israeli government “fully responsible” for the aggression against Palestinians in Jerusalem and the aerial bombardment of Gaza, without having any framework for pursuing culpability. Following the PA’s usual script, in the full knowledge that it has no political power to wield, Abbas appealed for international intervention to stop the violence against Palestinians and halt the dispossession of the residents of the Sheikh Jarrah neighbourhood in occupied Jerusalem.

In the face of such an aggressive display of Israeli colonial violence, the PA’s “all options” are still tied to rhetoric, allowing Israel once more to distort the narrative away from the Palestinian people who are out on the streets protecting what is left of their heritage. A quick online search reveals one omission for which the PA should be held to account: where are the Palestinian security services and why are they not protecting the Palestinian people?

A few years back, the PA security services were out beating Palestinians for opposing Abbas’s policies on Gaza but were absent when the president called for street protests over the US recognition of Jerusalem as Israel’s capital, knowing full well that protestors would be facing the Israeli occupation forces. Rights organisations have spoken about the role that the PA security services play in funnelling Palestinian detainees to Israeli jails. Abbas has, on occasions, reiterated that security coordination is “sacred”. Sacred for who? The Palestinian people have not benefited from the only entity that could, hypothetically, offer some form of protection, but the international community funds PA security personnel in the occupied West Bank for other reasons, namely to act as an extension of their Israeli counterparts — and bosses — in the territory.

So while Israel continues its aggressive display which has sent shockwaves around the world, spare a thought for the way that the PA rises to the occasion to masquerade as a political power without actually wielding any independent authority whatsoever. The international community had an obligation to prevent Israeli colonialism even before it started. That would have protected Palestinians from all the violence and displacement that they have faced since the 1948 Nakba. Without true leadership, they are risking their lives in an attempt to protect what is left of their land. The PA, meanwhile, has shown through its “official” position on “international intervention” that it is risking nothing.