Women in burkinis and men in suits

Letters To The Guardian Newspaper 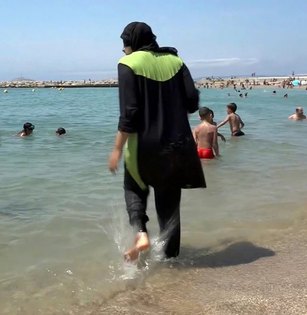 A woman wearing a burkini paddles on the seashore in Marseille, southern France.

This display of men controlling how women dress (Armed French police pictured ordering woman to remove burkini on Nice beach, 24 August) reminded me of my humiliation at an open-air pool in Ruislip in 1957 when I, beautifully suntanned and wearing a bikini, was ordered by loudhailer to leave the pool and dress suitably. Nothing changes, just a further reason – religion and terrorism are the current excuse.
Hilary Green
London

• No woman in a burqa (or a hijab or a burkini) has ever done me any harm. But I was sacked (without explanation) by a man in a suit. Men in suits missold me pensions and endowments, costing me thousands of pounds. A man in a suit led us on a disastrous and illegal war. Men in suits led the banks and crashed the world economy. Other men in suits then increased the misery to millions through austerity. If we are to start telling people what to wear, maybe we should ban suits.
Henry Stewart
London